FEW people in this country, apart from mountaineering enthusiasts, would have heard of Lincoln Hall until his recent obituary.

Hall was one of Australia’s most celebrated climbers and is perhaps best known for an ascent of Everest six years ago, after which, on the way down, he collapsed suffering from cerebral oedema, one of the most serious manifestations of altitude sickness.

Two Sherpas with him tried valiantly to help the delirious Hall until he lost consciousness, at which point the expedition leader ordered their withdrawal from what would have been a futile sacrifice. Incredibly, Hall managed to survive the night at 8,600 metres, apparently with the aid of transcendental meditation. He was rescued the next day by four climbers from another expedition.

Given his strenuous career in the most pitiless of the great outdoors, it was sadly ironic that Hall should have succumbed at the age of 53 to a disease more associated with heavy industry, shipbuilding, engineering and construction – asbestosrelated mesothelioma.

It may also seem a puzzle that one so young should have been afflicted by a disease whose gestation period can be up to 50 years from exposure. In fact, it was attributed to contact he had as a boy in his back garden in Canberra, building dens with his father, presumably using asbestos sheeting.

Hall’s death is a salutary reminder that the asbestos story will continue to dog us even though it is years since imports were banned in this country.

According to the Health and Safety Executive (HSE), asbestos is the single greatest cause of work-related deaths – from mesothelioma, asbestosis and lung cancer - in the UK. Although asbestos has now been banned, certain materials were still manufactured and used until 1999. It is estimated that at least 50 per cent of all asbestos used in the construction of buildings in the UK is still present.

Cases of asbestos-related diseases will continue to increase, with mesothelioma deaths alone now expected to peak at 2,500 a year by 2015, thanks not only to the long latency period but also the emergence of a new generation of victims. The burden of disease suffered by workers in asbestos manufacture and heavy industry has been inherited by workers in other trades associated with the building industry, with a far wider geographical spread. Life expectancy is also having an effect. People who once would have died from other things are living long enough for the disease to develop. So is this a time bomb for a National Health Service already under pressure with restricted resources?

The answer is probably no, but for reasons which are hardly a cause for celebration. The sad fact is that the NHS has little to offer mesothelioma patients beyond palliative care, which itself will be of limited duration given the rapid course from diagnosis to death taken by this brutal disease.

“It is potentially still a big problem - we are in the unknown territory of gauging the effect on the trades who have been suffering secondary exposure to asbestos products,” says Mark Britton, Professor of Respiratory Medicine at Surrey University, and Vice- President of the British Lung Foundation.

“Generally, though, the cost is going to be in human rather than financial terms.”

Treatment offers little hope for mesothelioma patients. Because the condition presents quite late, surgery - pleurectomy - has not produced encouraging results.

Professor Britton says: “Without wishing to sound negative, because the patient dies fairly quickly – mean survival being less than 12 months – there is not a long chronic disease phase. There is not a huge resource issue from the chronic care point of view.”

Chris Clark, a consultant chest physician working in the West of Scotland, says: “I started out years ago hoping that some effective treatment would emerge but it’s not there yet.

“The tumour forms a bulk around the lining of the lungs and constricts the ability to expand and contract, so that the patient progressively becomes more breathless.”

Radiotherapy has nothing to offer and although there is a new drug on trial – pemetrexed – Dr Clark says patients are often reluctant to enter trials at the risk of blighting their last few months with sideeffects, with limited benefit. Treatment then is “best supportive care” – in effect painkillers like morphine, which also eases breathlessness but affects consciousness levels.

“In my experience there are not nearly as many cases of asbestosis as there used to be,” says Professor Britton. “It needs a high dose of exposure and the latency period is not so long, so these cases are diminishing in number. I have seen one new case in the past month.”

An estimated mortality rate of 2,000 per year puts asbestos-related lung cancer on a par with mesothelioma. Certainly cigarette smoking and asbestos can form a deadly combination. “Smokers are staggered when you tell them that asbestos exposure increases their risk of lung cancer eightfold,” says Dr Clark.

Today typical patients suffering with asbestos-related conditions are no longer the older laggers and shipyard workers, and the people who manufactured asbestos products, but maintenance workers such as carpenters, electricians, plumbers, heating and telephone engineers.

“Now it can be secondary exposure – handling and working with asbestos products – and that can happen anywhere,” says Professor Britton, who sits on the Industrial Injury Advisory Council.

In public buildings and office blocks where asbestos has been used, a policy of “let sleeping dogs lie” has often been followed. Asbestos products are still around in buildings and still being handled, sawn and drilled. Even when the material appears to be in a stable situation, accidental damage can introduce risk.

Not even teachers and office workers have been immune nor, presumably, GPs, dentists and their staff and patients in older buildings. It is worth noting that every commercial building is now required to have an asbestos register in place and available for inspection by employees or trades people working on site.

The HSE tells us: “If you're responsible for maintenance of non-domestic premises, you have a duty to manage the asbestos in them, to protect anyone using or working in the premises from the risks to health that exposure to asbestos causes.”

Failure to comply can result in fines, imprisonment, refusal of employers’ and public liability insurance, and refusal by public utilities to conduct repairs to essential services (see www.tinyurl.com/smnsasb).

So the message for doctors is be aware – asbestos-related disease is by no means a thing of the past. 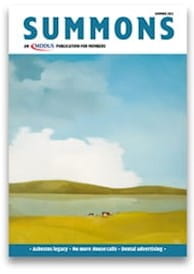