Antipsychotic drugs are still routinely used to manage symptoms in people with dementia despite the fact that the majority are inappropriate and potentially dangerous. Professor Alistair Burns is part of an initiative to change this

DEMENTIA is one of the greatest health and social care challenges facing the world today. An estimated 35 million people globally suffer from the disease, a figure expected to rise to over 100 million by 2050. Seven hundred and fifty thousand people in the UK have dementia and the number affected by the disease can easily be multiplied by two, probably by three and possibly by four if one takes into account carers and family members. The cost of caring for dementia patients is estimated at £20 billion a year, a figure dwarfing that for stroke, heart disease and cancer.

Some stark statistics help to underscore the scale of the challenge facing UK health and social care services in dealing with the condition. Two-thirds of people in care homes have dementia and around 25 per cent of general hospital beds at any one time are occupied by people with the condition (around 40 per cent among older people) – a significant proportion of whom would not need to be there were it solely for their medical condition.

In a 2009 publication entitled Counting the Cost, The Alzheimer’s Society reported the results of a survey of carers DEMENTIA CARE and hospital staff showing that 97 per cent of nurses claimed contact with people with dementia and 50 per cent of carers felt that admission to hospital had a detrimental effect on the mental and physical health of dementia sufferers.

The commonest reason for the prescription of these drugs is agitation or aggression – which are really non-specific signs (akin to fever) often indicating the presence of an underlying (and often undiagnosed) physical condition or something in the environment that triggers a response from an individual. Only about 20 per cent of people with dementia suffer from symptoms of psychosis (the presence of delusions, misperceptions or hallucinations) and the prevalence of schizophrenia in people over the age of 65 is low (probably around one per cent).

Drugs like thioridazine and chlorpromazine were widely prescribed for dementia in the 1970s and 1980s but the severe side-effects of these medications prompted the prescription of newer, less harmful antipsychotic drugs such as risperidone and olanzapine. The most common side-effects are cardiac (prolongation of the QT interval) and extrapyramidal Parkinsonian signs and symptoms.

In 2002, the Canadian Healthcare system identified excess mortality in patients treated with risperidone, which was confirmed a year later by the US Food and Drug Administration (FDA) and followed by a warning the next year from the European Medicines Agency for olanzapine and the UK Medicines and Healthcare Products Regulatory Agency (MHRA) for both drugs. The FDA extended the warning to the drug aripiprazole in 2005 and in the same year identified a 1.7 times increase in mortality for all the novel neuroleptics.

In November 2009 an independent report by Professor Sube Banerjee (Time for Action) commissioned by the Department of Health estimated that 1,800 deaths and 1,600 strokes were prompted by the prescription of these medications in the UK. This toll is in addition to the well-documented deleterious effects they have on cognitive function and also their contribution to precipitation of falls. With these recognised dangers, there is significantly increased awareness of the need for caution in the prescription of antipsychotic drugs in people with dementia.

The evidence base for alternatives to antipsychotic drugs is somewhat patchy. A range of complimentary treatments are often cited as being effective in dementia care and while small studies often do show significant benefits for interventions such as bright light therapy and aromatherapy, generally the results are disappointing and insufficient to recommend their wholesale introduction into practice (a quick scan of the Cochrane database attests to this).

Alternative drugs are often prescribed and a variety have been suggested to be of help, such as clonazepam for people with a specific REM sleep disorder often seen in people with dementia, or memantine which appears to have some beneficial effects on dementia patients who have behavioural disturbances. Other medications with a patchy evidence-base include trazadone, clomethiazole and propranolol (sometimes used in people post-head-injury to control agitation). Antidepressants such as citalopram have been used with some benefit. Reverting to older neuroleptics showing an evidence-base for less harm is not justified as they are likely to have a similar side-effect profile to the newer agents.

The Department of Health in England has embarked on a series of strategies to promote awareness and encouragement for reduction in the use of antipsychotic medications in dementia care. These priorities are being mirrored in the devolved nations. A care pathway is being developed which should be of help to people in primary care and others, emphasising the need to look at preventative strategies (early awareness, the opportunities for non-pharmacological interventions), the importance of person-centred care in the management of individuals with dementia and the key role that short-term medication, including antipsychotics, can play.

A series of audits is being conducted to gain high-quality information, and some specific audits, such as the Royal College of Psychiatrists Prescribing Observatory for Mental Health-UK (POMH-UK), should play a key role in driving down the use of neuropletic medications, even if just by raising the threshold whereby a prescription is given.

The Dementia Action Alliance (DAA) - which includes the Alzheimer’s Society and the Department of Health – recently announced that it wants all prescriptions for antipsychotics to be clinically reviewed by the end of March 2012.

Jeremy Hughes, Chief Executive of the Alzheimer's Society, said: “It is essential we bring an end to this chemical cosh and empower people with dementia and carers with the information they need to ensure they are not prescribed these drugs inappropriately.”

There have also been some notable local initiatives that have proved successful. In 2010 the Orders of St Johns Trust initiated a policy of requesting information on which of its care home residents had medication reviews completed by a GP over a two-month period. If reviews had not taken place, the home was asked how the issue would be addressed. The policy has resulted in a 16.6 per cent reduction in antipsychotic drug prescribing over a six-month period.

In Cornwall, health officials have developed a Dementia and Medications STAR Campaign. STAR (Stop, Think, Assess, Review) is a county wide, multi-agency educational toolkit aimed at reducing the use of inappropriate medication in people with dementia. It was developed by the local PCT, Royal Cornwall Hospitals Trust and Cornwall Care. It provides information regarding behavioural and psychological symptoms of dementia (BPSD), explanations of contributing factors and alternative strategies to medication. It also promotes a threemonthly checklist to review, monitor and reduce prescribing.

Such initiatives replicated across the UK should help bring about a change in attitude and practice in dementia care at a time when the older population is expanding year on year. For more information on the DAA initiative go to www.tinyurl.com/6guz5lu

Professor Alistair Burns is National Clinical Director for Dementia (England) at the Department of Health, Professor of Old Age Psychiatry, University of Manchester and Honorary Consultant Psychiatrist at the Manchester Mental Health and Social Care Trust 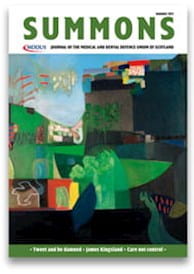