The medical textbook is (not) dead

With the iconic Davidson’s Principles and Practice of Medicine now in its 22nd edition, is there a future for student textbooks in the digital age?

IT’S hard to imagine what Stanley Davidson would make of medical education today with the vast ocean of information now available at a student’s fingertips.

In the preface to the first edition of his renowned Principles and Practice of Medicine, published in 1952, he wrote: “no attempt should be made to describe every rare disease or syndrome, but to devote most of the space available to those disorders more commonly encountered in practice”.

There can be little doubt it is the comprehensive yet encapsulated nature of the book – now in its 22nd edition – that has been a key factor in its enduring success.

“Students like to see the scope of what they need to know,” says Pauline Graham, commissioning editor of another highly successful textbook, Kumar and Clark’s Clinical Medicine. “They think, right, in five years I need to know that and I don’t need to worry about anything else. Because there is so much information out there – their biggest problem is filtration.”

I have come to the Edinburgh office of Elsevier to discuss the future of textbook publishing with Pauline, and Laurence Hunter, the commissioning editor of the last five editions of Davidson’s. Both books are published by imprints of Elsevier.

“It’s also about being authoritative and accurate,” says Laurence Hunter. “Although students can quickly look up a topic on Wikipedia they also want to validate that information against another source like a textbook from a reputable publisher.”

February 2014 saw the launch of the 22nd edition of Davidson’s – a textbook that over its 62-year history has been owned by well over two million medical students and other health professionals around the world. Stanley Davidson held the Chair of Medicine at Edinburgh University from 1938 until his retirement in 1959 and was a gifted teacher. His typewritten systematic lecture notes – given out to students – formed the basis of the first edition of Principles and Practice of Medicine.

Generations of medical students have relied on the textbook to provide a solid foundation in clinical medicine. Over the decades the book has grown and developed with increasing input from its main “users” – students. The current edition of 1,392 pages was produced with a core team of four academic editors assisted by 56 contributors across the world. Sales of the last edition were higher than any other previous and expectations are that the current edition will exceed this figure. Much of the success in recent years can be attributed to growing international sales, especially in India.

But it would seem that a textbook like Davidson’s is countering a trend. Sales of print products including books have steadily declined as more and more people get their information online. Journals were the first to make the transition and Elsevier was at the forefront of this revolution.

“The whole journals business went online easily,” says Hunter. “With the dawn of eBooks and Kindles there was an assumption that there would be a similar transition to digital books. This was the future. But it hasn’t worked out like that. It’s proved much more complicated.”

Elsevier and other large book publishers have certainly had to respond to the new digital paradigm, says Hunter. “Many large professional-level clinical textbooks have moved to online delivery of content with the opportunity to keep these up to date much more easily.”

The range of smaller medical textbooks for students and trainees has reduced considerably with much of this material being now free and easily accessible online. But the decline in print books for students and young doctors – at least those produced by larger publishers – is not all to do with technology.

“The average debt for a London medical student is now around £90K, and outside of London it’s between £40K and £60K,” says Pauline Graham. A shelf full of medical books has become a luxury many students can no longer afford.

“Everyone’s focus is now on the bare minimum,” says Hunter. “There are 120 pages in Davidson’s on cardiology so students now ask why do I need a separate cardiology book? Plus the time that students spend in many clinical rotations has been reduced or completely removed. Subjects like surgery have almost become a postgraduate topic.”

Another factor is the decline of the academic bookshop. Says Hunter: “Gone are the days when you could go into a campus bookshop and browse to see what was available in, say, paediatrics. That has had a considerable effect. Amazon tries very hard to replicate this with the ‘Customers Who Bought This Item Also Bought’ and ‘Look Inside’ facilities. But you still need to know what you’re looking for.”

With so many print titles now facing extinction is there still a requirement for “door-stop” medical textbooks like Davidson’s and Kumar and Clark?

“Absolutely,” says Pauline Graham. “Was it Twain who said rumours of my death have been exaggerated? It’s exactly the case for medical textbooks. We’ve all be waiting for them to die. But as long as students perceive the need for an encapsulated, authoritative, one-stop shop that doesn’t rely on electricity or a need to be insured to be taken out of the building, the printed textbook will persist – though the number of titles and units will almost certainly shrink for developed markets.”

Graham believes the future of the textbook will increasingly be hybrid products marrying up print with interactive digital content. The current 8th edition of Kumar and Clark is sold with access to an impressive online version featuring the full text and images, along with 30 extra short chapters covering additional non-core topics such as malaria, envenoming and HIV. It also provides animated practical procedures, such as lumbar puncture or arterial cannulation, an audio player for heart and lung sounds and interactive surface anatomy. The online version won first prize in the ‘Digital and online resources’ category of the 2013 BMA Book Awards.

Users can access the textbook via Elsevier’s Student Consult website, which recently underwent a major upgrade in collaboration with eBook platform provider, Inkling. Apart from enhanced interactive features, one big plus of the new platform is that it is device neutral, allowing students to access the content from laptops, tablets or smartphones. Davidson’s is also available on Student Consult.

However, print is still very much an important element of this hybrid, says Graham. “That’s what’s been so interesting. It’s not us holding things back and being dinosaurs; instead students are saying ‘I don’t want my Davidson’s or K&C only in electronic form. I do want it online so I don’t always have to carry the book around, but this [the printed version] is my insurance policy for the lights going out or my laptop getting stolen or damaged’.”

Predicting just how textbook publishing might evolve further is not easy but cost is likely to be a major factor.

“There are already signs of change,” says Laurence Hunter. “Students (outside of Scotland) having paid their tuition fees and turning up on their first day are handed a reading list and told to go off and buy a list of books. And they are saying: ‘Hang on a minute. I just paid £9,000. Don’t I get this as part of the package?’ I think universities are going to have to up their game in information provision and might look to provide this as part of their service to students.”

Such a development might mean selling libraries of content and allowing faculty to create their own course materials. Says Graham: “There would still be a future for the information we produce but the universities might take on the printing and distribution costs within their institutions and students will still get the information they want.”

But both editors agree that no one model is certain. Recently Pauline Graham spoke at a Royal College of Physicians seminar on the future of medical publishing.

“One of the things I said at the RCP was that the short-to-midterm future of books is indicated by what’s happening in schools now, as that will determine how the next generation of medical students expect to receive information. If it’s by a mix of White Board, database, Wiki-sites, library and individual printed copies, that hybriddelivery expectation will come with them to tertiary education.”

So maybe the death of the medical textbook has indeed been exaggerated. 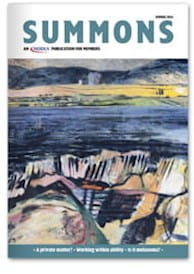