But I believe it!

Balancing rights in the expression of personal beliefs in the workplace

EVEN those who don’t follow employment disputes with the enthusiasm of this writer cannot fail to have noticed that, over recent months, a succession of cases involving freedom of speech and belief have hit the headlines.

Disputes about wearing religious symbols at the workplace, declining to carry out certain work duties for reason of religious conscience, a Christian refusing to work on a Sunday, dismissal for membership of the British National Party and someone expressing personal opinions about gay marriage on Facebook have all been addressed in courts – in both the UK and Europe. The results have important implications for all employers and their employees.

Whilst some lessons from these cases are clear, some effects are not quite so obvious. One of the consequences is that uncertainty about what opinions can be expressed (at the workplace and in the privacy of one’s own home) is neither good for employees nor their employers. So let’s try to spell out what Law At Work sees as some definite conclusions to be drawn from all the legal debate on these topics.

Firstly, it is worth pointing out that virtually all the employing organisations who have been taken to court in these cases would not have anticipated finding themselves the centre of public attention for these reasons. The employers have varied from a local authority to providers of school transport services, a Hospital Trust, a voluntary sector counselling service and a Housing Association. It can be safely assumed that no employer can be considered to be immune from these issues – albeit that spats over these issues at the workplace don’t normally end up in court.

Secondly, many of these cases have been hijacked by special interest groups (often with a religious agenda) for their own publicity purposes. This makes sorting out the press coverage from the reality of the court decisions difficult, and more than a question of over-simplification. Sometimes the coverage is simply wrong.

What we are sure of is that, in general, employers can justify asking staff to subjugate their personal beliefs if they conflict with the rights of other employees or customers, with safety/hygiene standards or with stated equality policies applying to service delivery, without falling foul of equality or human rights law. That is provided employers have at least looked at less discriminatory ways of imposing their policies.

Take for example the widely reported case of Shirley Chaplin, who worked for Royal Devon and Exeter NHS Foundation Trust as a nurse on a geriatric ward. The hospital asked her to remove a cross worn around her neck as it was a safety hazard when she was leaning over patients. They suggested that, if displaying the cross was of importance to the expression of her Christianity, she might wear a turtlenecked t-shirt under her uniform and over the cross and chain, but the applicant insisted that the visible wearing of the crucifix was an essential part of her religious faith.

Ms Chaplin was moved to a non-nursing temporary position which ceased to exist in July 2010. She applied to the Employment Tribunal in November 2009, complaining of both direct and indirect discrimination on religious grounds. Her complaint was rejected because the hospital could justify their actions for health and safety reasons and people of all religions would be subject to the same safety restrictions when it came to the uniform policy. Her subsequent appeal to the European Court of Human Rights was unsuccessful – substantially for the same reasons.

What’s also clear is that moderate expression of personal opinion which does not offend or intimidate others (or bring the employer’s public reputation into disrepute) should be dealt with tactfully by employers and not used as a knee jerk excuse to dismiss the person concerned. For example, a Housing Association in Manchester received complaints from two gay staff members that a colleague had expressed personal views opposing gay marriage on his own Facebook profile. The Association decided to discipline the employee for this and demoted him to a lower-paid position. The employee successfully asked the court to declare this action in breach of his contract – with the High Court stating that the employee’s moderately expressed views on his own Facebook page were sufficiently innocuous as to make the Association’s actions excessive and therefore in breach of his contract.

In the majority of cases of conflict around expression of personal beliefs it is our experience that an informal word with the people concerned will often lead to the moderation of their language or behaviour – to restore the peace again. The employer is, after all, able to insist that tolerance is compulsory in the workplace.

Practices finding themselves challenged about these issues can ask for support from the MDDUS HR and Employment Law Advice service and, if required, from Law At Work who provide a legal advice backup service to the MDDUS advisers. 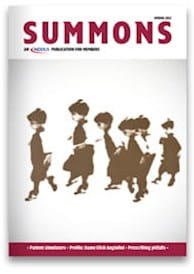