WALK down one particularly busy corridor at the Edinburgh Royal Infirmary, just past orthopaedics on the way to casualty, and the routinely magnolia walls suddenly give way to a stunning display of colour and form. Here, completely unannounced, is a striking watercolour by John Bellany of the Madonna and child, with the Bass Rock looming large above them. Alongside is an abstract expressionist work by Alan Davie, Energy is Delight, and, further along, Ian Hamilton Finlay’s ‘concrete poetry’ is given form in AIEO Blue. On the opposite wall, a series of abstracts by Wilhelmina Barns-Graham lights up the corridor further still.

It’s a collection from some of the country’s leading artists that would be at home in any major gallery. It is also, in the words of senior cardiac physiologist Linda Bernardin, who happens to be passing on the day I visit, “much more interesting than the usual notices and warnings”. There’s no doubt about that. More importantly, she says: “I think having nice artwork on the walls helps the patients – and the relatives.”

Another passing healthcare worker, Janet Smalley, agrees. Plus, she adds: “We also need something nice and bright to put a spring in our step.”

Views like these are grist to the mill of those people whose mission it is to get as much high-quality visual art as possible into hospitals, hospices and other healthcare facilities in the UK – charities like Art in Healthcare (AiH) in Scotland, which is responsible for the ERI display, and Paintings in Hospitals (PiH), their counterparts in England, Wales and Ireland. Art, they believe, has a powerful role to play in the health service, from providing a stimulating environment for patients, relatives and staff, to aiding certain kinds of therapy, and even helping to speed up recovery.

Stuart Davie, the director of PiH, cites a 2002 study carried out at London’s Chelsea and Westminster Hospital on the effects of visual arts in healthcare. “There was a reduction in the length of stay in hospital by up to one day and in the use of some medications, such as painkillers,” he says. “They also noted that staff morale – and this wasn’t something they were looking to measure – was improved.”

It is but a single study and drawing strict scientific conclusions is always going to be controversial in an area like this, but nevertheless Chelsea and Westminster have acted on their findings. “All of the main corridors are jam-packed full of interesting pieces of artwork,” says Davie.

And the London hospital is far from alone in what Davie calls “humanising the space”. Pieces from PiH’s nearly 5,000-strong collection of photographs, paintings, drawings and sculpture – built up since the organisation’s inception in 1959 and including such luminaries as Op Art proponent Bridget Riley, Mary Fedden and Young British Artist Ian Davenport – have found their way into more than 250 healthcare sites. In Scotland, work from AiH’s collection of 1,200 pieces is to be seen in around 40 locations.

Both schemes operate in a similar way (in fact, AiH was formed in 2005 from what was then the Scottish branch of PiH, itself formed in 1991). Healthcare bodies rent each artwork for two years for a small amount – £35 per year from AiH, £40 from PiH – that is unrelated to artist or size and includes insurance. Users are encouraged to choose their own works, through the formation of an arts committee of clinicians, patient representatives, and administrative and auxiliary staff.

It is a crucial part of the process, says Trevor Jones, AiH’s assistant director. “It’s important that the people who will be seeing the pictures have a say in which ones are chosen,” he says. “It makes more sense, as they’re going to be living with them – rather than me just showing up with a couple of pictures and putting them on the wall.”

Pictures are selected online or, in certain cases, visits to the storage facility can be organised. In the case of Lynebank Hospital in Dunfermline, for example, a long-stay hospital for people with learning disabilities, Jones says: “They came down and brought about six of the residents. Along with a couple of staff, they chose the pictures directly from our picture store.”

Works by the likes of Elizabeth Blackadder, Turner Prize nominee Callum Innes and Mary Fedden – whose still-lifes are more usually seen in the Tate Gallery and the Queen’s Collection – don’t come cheap, and most of the pieces in these vast collections have been donated, bequeathed or lent by artists and owners, though some are commissioned specifically, usually using grants from arts councils or trust funds.

Sometimes artists see works in hospitals from AiH and PiH and decide to get involved, and sometimes, says Jones, their involvement comes about because of what isn’t on the walls. Two years ago, for example, artist Miriam Vickers underwent treatment at the Princess Alexandra Eye Pavilion in Edinburgh. “She was spending a lot of time at the Pavilion,” says Jones, “and she thought, ‘This place really needs some art!’” Vickers contacted AiH and, as a result, six of her landscapes now have pride of place at the hospital.

Usually, the impetus for hanging artworks comes from the other side of the medical equation. When Dr Conor Maguire, consultant physician in care of the elderly at the Royal Victoria in Edinburgh, first came across AiH paintings at the hospital, he felt immediately this was an organisation from which his patients could benefit. He is now a contract holder with AiH and has increased the number of paintings at the facility. But for financial constraints, he says: “I would fill up every wall in the hospital.”

Before taking up his current post, Dr Maguire had done some research into art in dementia in Bristol. “I noticed the way patients with dementia would interpret art differently from those who didn’t have dementia,” he says. “One patient was an artist and he started changing all his pictures when he became more demented, using more vivid colours.”

He now finds that, along with pets and music, artwork – often colourful abstracts – can help to get through to patients who might otherwise sit curled up in a chair not talking to anyone. They provide a fresh and neutral source to approach patients about, so they don’t end up talking about the hospital food or the temperature of the wards.

There are other benefits too, he says. Some of the occupational therapists use paintings in reminiscence therapy, while stroke patients might be encouraged to copy the paintings or, for those with speech problems, to talk about them. Dr Maguire has even managed to build a painting into the exercise regime of one of his Parkinson’s patients.

“I said to him: ‘There’s a lovely painting near my office.’ And he now walks to that painting as part of his mobility exercise. To me that’s fantastic.”

Views may have shifted considerably since social worker Sheridan Russell set up PiH 51 years ago, when the idea of brightening up the patient environment with paintings may have stretched to a few fusty portraits of famous surgeons and philanthropic businessmen. But there are still arguments to be won concerning the cost of art, however small, particularly in the teeth of a financial crisis.

“It’s not as difficult as it once was to put artworks into healthcare,” says Stuart Davie, “but the issue for us moving forward is financial. Healthcare sites may not wish to be seen to be spending anything on the environment when budgets are being cut.”

So the credit crunch is having an effect here, as in every other walk of life. But there is a silver lining: having read in the press about the Royal Bank of Scotland’s £20m art collection of more than 4,000 works, AiH contacted the bank – now 84 per cent owned by the state – and suggested the charity might help with displaying what is, after all, a public asset. “As a result, RBS are going to be lending us up to 300 pictures, which is fantastic,” says Trevor Jones.

At the time of writing it’s not known if these will include any of their really famous works, such as Colourist masterpieces by Frances Cadell and Samuel Peploe, but visitors to Scottish healthcare sites may be in for a surprise.

Adam Campbell is a freelance journalist and regular contributor to Summons 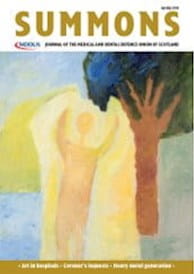