THE diagnosis and management of cauda equina syndrome (CES) can be fraught with potential difficulties. Back pain and sciatica are common conditions, but an average GP will probably encounter only one or two cases of CES in their professional lifetime.

A patient in pain from a disc prolapse may have difficulty passing urine purely for mechanical reasons. The analgesics used in treatment almost invariably cause constipation. This situation is entirely different from CES where, instead of a lumbar disc protruding to one or other side of the spinal canal and compressing nerve roots to the lower limbs, it prolapses centrally. Here it impinges on the nerves subserving sensation to the saddle region, bladder, urethra and rectum, as well as the parasympathetic motor innervation to the bowel and bladder.

It is critical to diagnose CES at an early stage because these nerves have characteristics which make them both vulnerable to injury and unlikely to recover from a severe insult. Firstly, they comprise small myelinated and unmyelinated nerves which are less resilient to compression than larger fibres. Secondly, because compression occurs proximal to the cell body, axons will not regenerate if Wallerian degeneration develops.

Although there remains controversy regarding management of CESR, many studies have concluded that, once this state is reached, the opportunity has been lost to reverse the situation by emergency decompression. In contrast, the outcome for CESI is usually favourable; therefore it is important to achieve decompression before the patient has progressed to CESR. Any perceived delay in diagnosis and treatment, or failure to warn the patient of the need to seek urgent attention should CES symptoms develop, may lead to allegations of negligence.

A detailed history is needed to differentiate between CESI and bladder disturbance secondary to pain and constipation. The patient in pain who is having difficulty voiding purely for mechanical reasons is aware that the bladder is full, retains the desire to micturate, has normal sensation in the saddle region, and a tender bladder. Urethral sensation is preserved and the patient can differentiate flatus from faeces. In contrast, the patient developing CES will experience some or all of the following:

If doubt exists about the diagnosis, the only way this can be resolved is by emergency MRI

Unfortunately, the distinction between the two is not always clear. Some patients will complain of altered saddle sensation but an MRI will show no compression. Conversely, a person with CESR may remain continent by toileting regularly to avoid over-distension of the bladder, and micturate by straining or applying lower abdominal pressure. Although the presence of bilateral sciatica is well-known as a ‘red flag’ for CES, many cases will only ever have unilateral sciatica. Very occasionally, an L5/S1 central disc may compress the cauda equina without involving the laterally-placed nerve roots. CES can therefore occur without sciatica. Neither is report of an improvement in back pain/ sciatica always reassuring. When the disc fragment migrates centrally, pressure may be relieved from the laterally-placed nerve roots. This results in relief of sciatica at the time that CES occurs. If doubt exists about the diagnosis, the only way in which this can be resolved is by emergency MRI.

In the context of general practice and accident & emergency, the areas most likely to cause difficulty are, firstly, failure to consider the diagnosis of CES. Secondly, patients may dispute the accuracy of their records, alleging that CES symptoms were present at an earlier date but were not recorded accurately or acted upon. Thirdly, patients may accept that they did not have symptoms of CES at the time of a particular consultation but allege that they should have been given ‘red flag’ warnings about the early symptoms and told to seek emergency medical attention should they occur. Fourthly, there may be a delay in seeking specialist opinion.

There are two particular additional hazards in hospital care. The first is in failing to arrange investigation of suspected CES with appropriate urgency, particularly in units that do not operate an out-of-hours MRI service. The second is the timing of surgery once the diagnosis has been established. The degree of urgency with which CESI should be investigated will depend upon the clinical circumstances. In nearly all cases MRI is required as an emergency because of the risk that they may progress to CESR with any delay. If it is not possible to arrange this out of hours then the patient should be transferred elsewhere. On rare occasions where a history of early CES has been obtained but symptoms have been static for some days, it may be acceptable to delay investigation overnight, provided the patient is warned to report any deterioration. Measurement of urinary volumes and post-void residuals may be reassuring.

Whilst some clinicians have interpreted the outcome of a meta-analysis by Ahn et al (2000) as indicating that there is a 48-hour ‘window’ in which to treat CES, this notion is unsafe (Chau et al, 2014). In particular, it does not apply to CESI. Once the diagnosis has been made, CESI will usually be treated as a surgical emergency, regardless of the hour. However, this decision is not always straightforward. Surgery for a large central disc can be challenging and carries a risk of adding to the deficit if performed under less than ideal circumstances. It may be argued, therefore, that it is appropriate to delay decompression by a few hours if, by doing so, the risk will be lessened.

As far as surgery for CESR is concerned, meta-analysis suggests that there may still be merit from emergency decompression (Todd, 2005). However, much of the literature suggests that outcome is no better, and that decompression can be delayed until the first case the following day. In the interim, the patient should be catheterised to avoid bladder overdistension leading to secondary detrusor failure.

A number of measures can be taken to minimise the risk of litigation, although they should not all be seen to represent a standard of care:

• Think about the diagnosis of CES in every patient with back pain and sciatica. Make a written note if there is no evidence of this condition.

• Warn the patient to seek emergency attention if they develop CES symptoms. Document that they have been told this.

• If CES is suspected, telephone the on-call orthopaedic or neurosurgery team. Do not be reassured if a junior doctor tells you to refer the patient as an urgent out-patient. If you are not satisfied with the response, seek a more senior opinion or tell the patient to attend A&E.

• Lack of an emergency MRI service is not a valid reason to delay investigation. If the degree of clinical urgency cannot be met, refer the patient elsewhere.

• CESI is usually treated as a surgical emergency, regardless of the time of day. If there are good clinical reasons to delay decompression, document why this is justified. If the delay is due to lack of surgical expertise, consider referring the patient elsewhere. 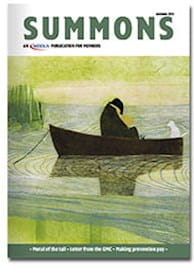