TODAY it seems almost quaint to think of the keen student of the 20th century carrying his heavy medical textbooks under one arm, or the consultant eagerly waiting for the latest journal to drop through his letter box.  Print was the medium of choice to convey information then and Charles Macmillan was a publisher who grew the Edinburgh fi rm of E & S Livingstone from small beginnings to become a major producer of medical textbooks and journals worldwide.

Charles Hawkins Craig McMillan was born on 25 June 1902 – his long name incorporating that of the doctor who delivered him. He later changed the spelling to Macmillan, a name better known in England. His parents were Plymouth Brethren and Charles was taught the bible, from which he could quote or adapt phrases to suit most situations.

On leaving school Charles joined one of his sisters at the printing firm of Nelson’s (a brother was a bookbinder). At age 17, he moved to the medical publisher and bookseller E & S Livingstone, founded in 1864 in a building opposite the old medical school. Charles started at the bottom but his abilities were obvious and by 1935 he was appointed general manager and then joint managing director with Alfred J Scott. It was a very paternalistic organisation with annual outings for staff, widows and children. “Blind children and motherless bairns” were entertained and the needy received Christmas gifts.

The Second World War turned industries at home upside down, including E & S Livingstone. Even basic materials like paper and ink were rationed. Macmillan was in a reserve occupation but he lost staff to the services and authors were committed to the war effort and had little time to write. A bomb destroyed stock in a warehouse of their distributor in London and 1943 and 1944 were full of disasters. A fire at a printing factory destroyed 90 per cent of the company’s illustrations, a promising young author’s ship was torpedoed on the way to South Africa and Alfred Scott died suddenly. Macmillan became the sole managing director.

Macmillan’s great skill was engaging with people. He toured England in September 1941 to visit his authors, such as Watson-Jones and Hamilton Bailey, and to recruit more. He met secretaries, nurses and booksellers. He chatted with doctors at their residency who found in him a friend. He reported back: “This is the place where you get all the secrets about your books, and these young doctors were very ready to talk about a variety of subjects which I have carefully made a note of for future reference.” Ten years later a young Stanley Davidson gave him his lecture notes which became a best seller: Davidson’s Principles and Practices of Medicine (1952).

Macmillan made sure his authors had copies of the firm's books and gained much good publicity thereby. He had even sent a copy of Child and Adolescent Life in Health and Disease to the Queen in 1946. He also went to book exhibitions and medical congresses around the world, and hosted and attended dinners. A particularly long trip in summer 1954 was to the USA and Canada where the publisher had sales agents. He summed up his attitude to success: “If you are a good publisher then, like a good farmer, you can't help making money. If you publish to make money you can't help losing and you can almost smell a good manuscript.”

The firm grew with the turnover in 1962 nearly twenty times that of 1944-45, of which foreign sales were more than half. A new warehouse was built in West Crosscauseway to store some of the 400 plus titles. So the firm had good reason to celebrate its centenary at a dinner in the North British Hotel, Edinburgh in 1963. Staff and authors including Professor John Bruce and Sir Derek Dunlop were invited.

Macmillan was more than a publisher. Among other appointments he served as chairman of the Edinburgh, Mid- and East Lothian Disablement Advisory Committee and was also on the Finance Committee of the Princess Margaret Rose Hospital and was director of the Edinburgh Chamber of Commerce and Manufacturers.

Macmillan retired in 1967 and E & S Livingstone later merged with J&A Churchill of London to form Churchill Livingstone, now an imprint of Elevier which still maintains edtitorial offices in Edinburgh. In 1970 Macmillan was honoured with an OBE for services to exports and to medical publishing. He had time to play as much golf as he wanted at the Glenlockhart Club, and time for the nineteenth hole. He and his wife Isabella, who predeceased him, had four children, two girls and two boys. He died October 25th, 1984. 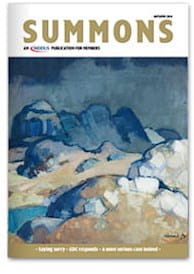