FAME came to Professor Michael Woodruff in 1960 when he performed the UK’s first successful kidney transplant at Edinburgh Royal Infirmary. This landmark achievement was the result of years of research as well as an innate ingenuity demonstrated early in his career in the unlikely setting of a Japanese prisoner of war camp.

Woodruff was born in London, the son of a professor of veterinary medicine. He moved to Australia with his father in 1917 following his mother’s death and was educated in both Britain and Australia.

He won a government scholarship to read electrical engineering and the first two years of a maths degree at the University of Melbourne but, fearing poor employment prospects, he added a medical degree (MBBS with Honours and two prizes in surgery). Sport, the student Christian movement and learning to play the college organ occupied his spare time. By this time he had grown tall and his lower jaw protruded slightly giving him a pugnacious aspect.

He earned his MD and studied tropical medicine before being called to active service in WW2 as a captain in the Australian Army Medical Service. Soon he found himself in the notorious Changi Prison Camp. During his three and a half years imprisonment he persuaded his Japanese captors to allow him responsibility for improving the men’s diet as he could see they were at great risk from vitamin deficiencies. He devised a life-saving method of extracting vitamin rich nutrients from grass and agricultural waste. Building and running the equipment required great ingenuity and he began treating prisoners in other camps.

Post-war, in 1946, he met and married Hazel Ashby, an able researcher who shared many of his interests and contributed to his future research projects. He took his new wife to England and in 1947 passed the FRCS exam – a result that, in Woodruff ’s view, was certainly not hindered by the fact that one of his examiners, Colonel Julian Taylor, had been with him in Changi.

Woodruff then took a post as tutor in surgery in Sheffield. There he studied transplant rejection with a particular interest in thyroid allografts to the anterior chamber of the eye as these did not appear to meet with rejection. He met accomplished physician and biochemist Hans Krebs and also consulted another great scientist, Peter Medawar, noted for his work on graft rejection and his discovery of acquired immune tolerance.

He moved to the University of Aberdeen in 1948 and, with his wife as lab assistant, he continued his transplant research. Eager for promotion, in 1953 Woodruff moved to New Zealand as professor of surgery at the University of Otago Dunedin School of Medicine. Among his duties was the treatment of burns and his response was the establishment of a frozen skin bank. The patient population was small and he found that able students left. Eventually, in 1957, he landed the post of professor of surgery at the University of Edinburgh.

It was a tradition at Edinburgh for surgeons to be harsh with their students and Woodruff ’s pupils were known to fear his temper. In social situations, however, he was amicable. He owned a succession of yachts, often manned by junior staff pressed into his service. He was also a member of the famous Athenaeum club - an elegant place in London to entertain visiting colleagues alongside the famous.

On arrival in Edinburgh the promised research facilities were unavailable. The occupants were removed and he continued his tissue transplant work in the Wilkie Research laboratories. He employed specialist biological scientists, something almost unheard of at the time. Building on his work in Sheffield, Woodruff investigated the possible use of antilymphocytic serum as an immunosuppressive agent to suppress allograft rejection.

Following visits to the United States and Canada he had a plentiful supply of cortisone as an additional agent. It was only later that the now widely used immunosuppressant azathioprine would become available. While at Edinburgh, Woodruff was made honorary director of a research group on transplantation.

The world’s first successful human kidney transplant had been carried out on identical twins by Joseph Murray in Boston in 1954. At the end of October 1960 Woodruff showed it could be done in Edinburgh too. He had finally found the right patient, a 49-year-old man suffering from severely impaired kidney function who received one of his twin brother’s kidneys. The twins went on to live a further six years before dying of an unrelated disease. Following this transplant triumph, 127 patients were treated between 1960 and 1976, many operated on by Bernard Nolan.

Woodruff was elected FRS in 1968 and knighted the following year. In 1974 he received the Lister Medal and served as president of the Transplantation Society from 1972 to 1974. He gave the Macewen Memorial Lecture in Glasgow in 1976 entitled “And ghosts shall drive you on”. That year he retired from active surgery but continued research.

After retiring, he spent 10 years engaged in cancer research, publishing in 1980 The Interaction of Cancer and Host: Its Therapeutic Significance. He held the post of director of the Nuffield Transplantation Unit until 1986 and his autobiography Nothing Venture, Nothing Win was published in 1997.

Without a doubt, the dedication of Michael Woodruff and of those involved in kidney transplant surgery saved many lives. 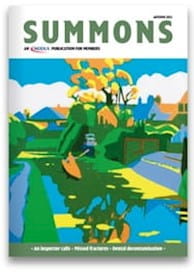