“End of life care is one topic where I rarely encounter neutrality,” says Deborah Bowman in her regular Ethics column

LAST month, a television audience was invited to accompany two men on their final journeys to the Dignitas clinic in Switzerland. The documentary entitled Choosing to Die was presented by Sir Terry Pratchett, a well-known supporter of assisted dying. The programme prompted much discussion, some disquiet and approximately 900 complaints (the majority of which were made in advance of the broadcast).

The debate continues and the ethical territory is well-trodden. Along with abortion, end of life care is one topic where I rarely encounter neutrality. Indeed, it is telling that I am acutely aware that the language I choose in this column matters: the terms 'euthanasia', 'assisted dying' and 'assisted suicide' are laden with meaning and may be understood (or misunderstood) as representing a particular ethical position. Patients, professionals and students readily proffer their views in seminar rooms, lecture theatres and conference centres and do so with conviction, passion and intensity. Those contributions are welcome, but increasingly I feel that the debate is 'stuck' with people having views that are entrenched and deeply-held to the extent that the arguments are rehearsed but rarely reflected upon.

Whilst I am the first to advocate discussion, I do often wonder whether anyone is really listening. That may be understandable. When feelings run high and opinion is polarised, hearing a different perspective (or even pausing sufficiently long to enable another view to be expressed) can be difficult. People who are otherwise considered and considerate, thoughtful and thought-provoking, can become mired in emotional, heated and unproductive arguments in which an array of philosophical fallacies is commonplace. Some might suggest that the passion with which beliefs are expressed reflects the significance of the issue: the end of life is a serious business and doctors are in a unique position in supporting those who are sick and dying. It might be argued that clinicians have a duty to articulate their perspective on end of life care. Yet, the ethical questions are too important to be obscured by dogmatism.

Whilst many people already seem to hold strong views, it is rare that I hear opinions expressed with reference to meaningful moral analysis that directly engages with the counter arguments. Ethical concepts such as dignity, autonomy and harm are cited frequently, but loosely and sometimes meaninglessly. It is not sufficient merely to assert one’s position using the language of ethics if one is unwilling (or unable) to understand, consider and respond to those who hold a different position or view. Regrettably, that is what seems increasingly to happen when end of life decisions are discussed whatever the setting.

The first step to a mature and constructive discussion is to listen. That is a simple proposition on paper but in practice it is more difficult than it seems, particularly when one has strongly-held opinions. To resist the natural tendency to infer and interpret whilst mentally constructing a reply when another person is speaking is a challenge we rarely articulate. To hear the words spoken, rather than the words imagined and to do so without preconceived perceptions of those with whom we disagree are essential but demanding requirements of ethical discussion.

Indeed, so often do conversations about end of life decision-making degenerate into competitive diatribe that there is a case for requiring all contributors to attend to the process and form for considering the issue. A starting point might be to reflect on one’s own views about end of life decision-making with reference to some of the common fallacies that can detract from the quality of ethical analysis and decision-making. An American colleague, Maurice Bernstein, has used his blog (http://bioethicsdiscussion.blogspot.com) to explore the ways in which common fallacies hinder discussion and decisions in relation to medical ethics and clinical practice. Whatever one’s opinion about end of life care and the attendant questions about the role of the clinician, it is vital to take the time to reflect on what underpins those views and to understand why others think differently. One of the best ways in which to do that is to step back, review one’s perspective through a rigorous and analytical lens and then to hear from others who have done likewise.

It is not merely that discussions about end of life decision-making are ethical in content. The process of those discussions is also a matter of ethics. Many readers will know what they think about assisted dying, Terry Pratchett’s documentary and the role of Dignitas in treating British patients. The limited words available to this column would be wasted in seeking to persuade or convince others about end of life decision-making and care, but it does seem both timely and worthwhile to encourage everyone to scrutinise their personal views, to engage respectfully and meaningfully with alternate perspectives and to attend as much to the process of the debate as to the content.

Deborah Bowman is a senior lecturer in medical ethics and law at St George’s, University of London 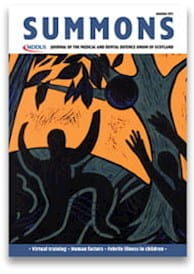