Law At Work: It’s who you know

'The law protects us from discriminatory comments and actions from colleagues and even (if they relate to sex) from customers and other third parties.'

WE HAVE ALL HEARD BANTER at work and may or may not have been offended by it. The degree of offence felt often depends on the context of the comments and the history both of the person making them and of our relationship with them.

The law protects us from discriminatory comments and actions from colleagues and even (if they relate to sex) from customers and other third parties. We normally expect unlawful harassing behaviour to relate to some characteristic of our origins, gender, disability status, beliefs or age. But recent legal developments suggest that the sources of that protection will, in future, be increasingly extended beyond ourselves to our relations and the people we know and socialise with.

Sharon Carr worked for Walker Taxis in Newcastle as a clerk and had an Indian partner. Her employer, Mr Jubb, frequently made comments about her relationship in racist terms which grew even more pernicious when Ms Carr became pregnant. She was eventually dismissed and became angry and distressed – resulting in her needing medical help for depression.

Not surprisingly, she took action against the company for unfair dismissal and racial harassment. Her discrimination action depended not on showing that the harassment was directed at her because of her own race, but because she was associated with someone else of a particular racial origin. Ms Carr was successful in her claims and was awarded £6,000 for injury to her feelings and £5,176 for the unfair dismissal. Her award was then increased by 20% because of the failure of the company to follow the statutory dismissal procedure. This is a perfect example of how ‘discrimination by association’ can be pursued in the courts.

Another case currently going through the courts illustrates the same point.

Sharon Coleman, a former legal secretary, is suing London-based Attridge Law for allegedly harassing her out of a job after she requested time off work to care for her severely disabled son.

Ms Coleman, 42, claims her former managers branded her "lazy" when she requested time off work to care for her disabled son, who has a rare respiratory disorder. She was also accused, she said, of using her child to manipulate her working conditions.

Her case, which was referred by the Employment Tribunal to the European Court of Justice (ECJ), rested on her being able to persuade the court that the UK’s Disability Discrimination Act (DDA) should provide for discrimination by association and that this means that she, a non-disabled person, is able to bring proceedings against her employer for behaviour related to her son, not herself. Currently, the DDA only provides protection to those who pass a medicallybased test to show that they are themselves disabled. Coleman’s argument was that the EU Employment Equality Directive, which must be fully implemented into UK law, provides for ‘association discrimination’ and that this means that the DDA should reflect this form of discrimination.

The ECJ has upheld Coleman’s argument and referred the case back to the Tribunal in the UK. According to the ECJ's decision, the Directive is intended to prohibit direct discrimination or harassment on grounds of disability, even where the person concerned is not disabled themselves. The Directive applies not only to disability but also to age, sexual orientation, religion and belief.

The implications of this case could now be far-reaching. Carers of disabled adults could now claim disability discrimination if their flexible working requests are dismissed in disparaging terms by their employer. If the 'association' discrimination principle also applies to age then consider this – suppose that Sharon Carr’s partner had been considerably older than her and that Mr Jubb’s remarks were equally insulting and offensive but related to the partner’s age, not his race…

Law At Work will be happy to let you know the final outcome of the Coleman case in the Tribunal if you read our free monthly email employment law update newsletter, LAWmail. Just log on to our website (www.lawatwork.co.uk) and click on the link to subscribe.

Law At Work is MDDUS preferred supplier of employment law and health and safety services. For more information on our services please visit www.lawatwork.co.uk or call us on 0141 271 5555 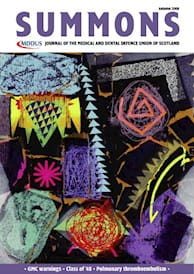