WHEN it comes to issues around probity and acting with integrity, many doctors may feel that this area of regulation is unlikely to ever trouble them.

But in our experience at MDDUS, even doctors who pride themselves on being open and honest at all times can sometimes fall foul of the rules.

Ask yourself: have you ever bumped into another car’s wing mirror but kept on driving because you were short of time? Have you ever “bigged up” your CV to improve your career prospects? Or perhaps you have logged into the patient system using a colleague’s name to speed up a relative’s referral, even though you are not the treating clinician?

The General Medical Council says that "probity is at the heart of medical professionalism and means being honest and trustworthy and acting with integrity". This expectation applies to doctors’ professional and private lives and it is a matter that the regulator takes very seriously.

MDDUS has supported many members facing probity allegations across a broad spectrum of issues. We’ve found that often doctors who find themselves in professional difficulties of this type have acted with the best of intentions, or have made questionable decisions while under extreme pressure – perhaps from challenging colleagues or circumstances within their workplace or wider environment.

The circumstances surrounding any allegations relating to probity will be considered by the regulator, including where these actions may fall on a sliding scale. For example, was the alleged behaviour a minor one-off mishap or were there repeated, deliberate acts of dishonesty for personal gain? Did the behaviour put patient safety at risk, or did it undermine public trust in the profession?

The GMC’s guidance is clear that doctors “must make sure that your conduct justifies your patients’ trust in you and the public’s trust in the profession”. Doctors must be prepared to justify their behaviour, even where they acted with “good intentions”.

A minor bump? In the scenario above relating to the car wing mirror, at first glance this may not seem like something that could have a bearing on a doctor’s professional fitness to practise. But if a witness reports the incident to police there is a risk the doctor could face a criminal investigation and their integrity could be called into question.

Enhancing the CV. A doctor may be convinced they are skilled/experienced enough to carry out a certain role or to earn a promotion – so where is the harm in slightly “enhancing” the truth in their CV to improve their chances of success? The reality is that the GMC (and likely the potential employer) will view this as a serious matter, as this kind of behaviour calls into question a clinician's honesty and integrity. GMC guidance on report writing states that "you must make sure that any documents you write or sign are not false or misleading" and "you must not deliberately leave out relevant information".

Family favour. It is not uncommon for doctors to be asked for informal advice by friends or family, but an apparent “simple favour” could lead to professional difficulties. For example, a doctor fills out an insurance form for a family friend. She omits a “minor” element of the friend’s medical history as it may affect a financial compensation payout. The doctor is confident that the missing information isn’t relevant and would have no bearing on the claim anyway. However, failing to accurately complete a form or report in this way could be regarded as dishonesty by the GMC.

Doctors treating or prescribing for relatives/friends in any capacity is fraught with difficulties and as the GMC says: "wherever possible, avoid providing medical care to yourself or anyone with whom you have a close personal relationship".

Cutting corners. Healthcare teams face extraordinary workloads and there may be pressure from colleague to “cut corners” to save time. Examples might include health and safety assessment checklists being ticked without the proper steps being carried out. Or signing a form in a colleague’s name because you are confident they would do so if they just had the time to read it. However, if one of these shortcuts resulted in patient harm or other negative outcome, then it is likely that the doctor responsible for that shortcut would face questions over their probity from the GMC. Doctors who are experiencing pressure to behave in a way that they believe could risk patient safety should follow GMC guidance on raising concerns.

Deliberate acts. There are of course more deliberate acts of dishonesty that have led to GMC investigation. Some cases MDDUS has dealt with include: doctors retrospectively altering patient records to cover up an error; misrepresenting the number of hours worked for financial gain; undertaking private or locum work while on sick leave from an NHS role; and entering into an inappropriate romantic relationship with a patient. Other common pitfalls relate to doctors’ use of social media.

Be sure to comply with GMC ethical guidance, particularly in relation to:

Kay Louise Grant is a risk adviser at MDDUS
Insight - Secondary is published quarterly and distributed to MDDUS members throughout the UK who work in secondary care. It provides a mix of articles on risk, medico-legal and regulatory matters as well as general features and profiles of interest to our members.
In this issue 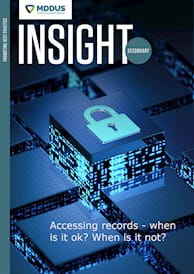