...The patient is convinced that this has been caused by ingesting mercury from the amalgam filling and exacerbated by the treatment to adjust the “poor occlusion”...

Mr K attends his dental surgery having lost a filling in a lower rear molar. The dentist (Dr F) advises that a less costly amalgam filling would be suitable, as it would not be immediately visible – but Mr K is given the option of a white filling. The patient opts for amalgam and the treatment is provided.

Two weeks later Mr K returns to the practice complaining of sensitivity in the tooth and an altered bite caused by the filling. Dr F takes a radiograph to rule out any pathology and then adjusts the occlusion.

Over a month later Mr K is back at the surgery complaining of pain in the tooth but also that he has been generally unwell since the filling was placed. He is convinced that this has been caused by ingesting mercury from the amalgam filling and exacerbated by the treatment to adjust the “poor occlusion”. A trip to his GP has provided no reassurance.

Examination reveals swelling adjacent to the tooth and Dr F diagnoses irreversible pulpitis. She offers the option of root canal but explains this would necessitate drilling through the amalgam filing with no way ensuring that some small quantity of filling material would not be ingested. Extraction is the other immediate alternative or referral to the dental hospital.

Mr K opts to have the tooth extracted.

A letter of complaint from Mr K is later received at the practice claiming that the “mercury toxicity” resulting from treatment carried out by Dr F had left him debilitated. He has been off work with illness and stress. Mr K states he is not looking for compensation but would want to “prevent this suffering” in other patients.

Dr F contacts MDDUS for assistance in drafting a letter of response.

A dental adviser reviews the draft letter of response. Dr F expresses regret at Mr K’s worry and dissatisfaction with the treatment. She states that no filling material is without disadvantages (including white fillings) but that in her experience as a GDP, mercury toxicity has never before been an issue. She suggests that Mr K return to his GP to further discuss his concerns.

No further comment is offered by Mr K and he remains a patient at the practice. 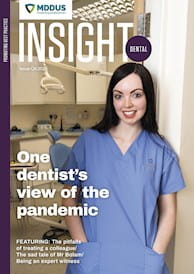