REPORTING a colleague that you believe poses a threat to patient safety is difficult for any doctor, but this can be especially daunting for trainees. It is important to remember, however, that you still have a professional duty to take action.

The tutorial was not going well. My trainer was on holiday and the senior partner, Dr Y, was standing-in.

She seemed distracted and not focussed on the task in hand which was discussing the NICE traffic light management system for children with pyrexia. Her hands were shaking and she dropped her pen on the floor. As we both leaned forward to pick it up I caught a whiff of alcohol on her breath. It was 10am.

We muddled through the next half hour before it was time for my surgery. One patient who usually saw Dr Y came to me for his blood test results, concerned he had been passing blood in his urine and was not any better after antibiotics. His file showed his haemoglobin was 8.9 and his PSA was 18. The comment on both results from Dr Y was for no further action. Concerned, I went to discuss the results with her before advising the patient. I walked into her room rather hurriedly a few seconds after her patient had left and saw her reaching into a paper bag in her bottom drawer. She startled when I came in and shouted: “Can’t you knock?! What are you pestering me with now?”

I explained the situation with the patient and as she turned to the computer I could see in the drawer a green necked bottle poking out of the paper bag.

What was I to do? Should I just ignore it? I had only been in this practice for four months and I had two months still to go with another year until the end of my training. Was it really my place to be poking my nose in? After all, I would need a reference in the future. But her management plan for that man was not appropriate and who knows what would have happened if he had not come in to see me? Where could I get advice?

Sadly the scenario outlined above is not an uncommon occurrence in surgeries and wards across the country. Alcoholism and addiction are signifi cant problems within the medical profession. The British Medical Association estimates that one in 15 healthcare professionals will develop an addiction problem and doctors are three times more likely to develop cirrhosis of the liver than the general population. Whilst this raises concerns about doctors’ health, it also raises significant patient safety concerns.

Patient safety has been high on the agenda ever since the 2010 Francis Inquiry into the high number of deaths at Stafford Hospital. An increasing emphasis has been placed on the responsibility of healthcare staff to raise concerns, with health minister Jeremy Hunt calling for a “culture of openness” in the NHS.

The General Medical Council responded by publishing detailed guidance in 2012 on Raising and Acting on concerns about patient safety, building on requirements set out in its core guidance Good Medical Practice. Whilst their 2012 guidance off ers suggestions about what to do and who to approach if a doctor has concerns about a colleague, it is not exhaustive. Doctors must use their judgment to apply the principles to their particular situation.

When to speak out

In the scenario described above, the first thing the trainee should do is to call her defence organisation. MDDUS advisers are happy to talk through issues like these in confidence. While each situation is diff erent, there are some broad principles to consider when raising a concern about a colleague.

The GMC is very clear that: “All doctors have a duty to raise concerns where they believe that patient safety or care is being compromised by the practice of colleagues or the systems, policies and procedures in the organisations in which they work.”

Understandably a doctor may be reluctant to report a concern about a colleague for various reasons. The trainee in this scenario has to return to the practice to finish her training and will also require a reference. Raising a concern could affect her relationship with co-workers and she may be worried that a complaint could be made against her.

Whilst recognising this difficulty, the GMC reminds doctors that the duty to act to protect patients overrides a doctor’s personal and professional loyalties. The law does provide protection against victimisation or dismissal for individuals who reveal information in raising genuine concerns and exposing malpractice. Furthermore, you do not need to wait for proof. Raising and acting on concerns states clearly that you will be able to justify speaking out if you do so honestly on the basis of reasonable belief and through the appropriate channels, even if you are mistaken.

Clearly our trainee ought to be raising her concern with someone.

It is important to know who to tell about a concern. As a trainee it would be appropriate to approach your trainer in the first instance. If the concern is about your trainer or you feel uncomfortable about discussing the matter with them, your deanery’s training programme director would also be appropriate.

In some circumstances it would be appropriate to inform the GMC, such as when the concern relates to the responsible person or body. Otherwise, contact with the GMC is usually made after you have raised the concern through the local channels and you were not satisfied that appropriate action had been taken; or there is an immediate and serious risk to patients and the regulator has the responsibility to act or to intervene. Again, contact an MDDUS adviser for help.

Very rarely is it appropriate to make a concern public but I do not recommend you do this without seeking further advice.

It is important to be clear, honest and objective about the reason for your concern and be sure to focus on the issue of patient safety. In our scenario above, the trainee may be quite rightly annoyed at the way the senior partner has spoken to her, however she should separate these emotions and any feeling of personal grievance. She should instead focus on the issue of the missed abnormal blood results, the smell of alcohol on the breath and the bottle in the drawer. It is also important to keep a record of your concern and the steps that you have taken to deal with it.

In the scenario above the trainee phoned MDDUS for advice. As her trainer was still on leave, she was advised to discuss the issue with the deputy trainer or phone the deanery. She spoke to the deputy trainer who reassured her that the matter would be dealt with. The deputy trainer then spoke to Dr Y who agreed to take a period of leave from the practice to seek help. It transpired that Dr Y was known to have an alcohol problem and her condition had relapsed. She had been working under conditions imposed by the GMC following previous concerns about her fitness to practise. The regulator was informed of the relapse and took appropriate action to ensure patient safety until such time as she was fit to be working again.

Dr Susan Gibson-Smith is a medico-legal adviser at MDDUS 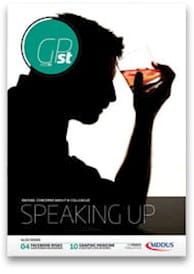