Her experience as a cancer patient inspired Dr Kate Granger to launch a campaign to improve the way doctors talk to their patients.  She tells FYi about her quest for change

BEING informed you have terminal cancer at the age of just 29 could rarely be viewed as a positive experience. But for Dr Kate Granger, now 32, it provided an opportunity to try to change the way doctors care for and communicate with their patients.

Struck by how few doctors took the time to introduce themselves to her during hospital treatment, last year Kate launched the #hellomynameis campaign which has gone on to become a huge success, with Twitter posts being shared nearly 48 million times across accounts worldwide.

Kate first began sharing her experiences in November 2012 when she set up a blog offering a startlingly honest perspective on “End of life care through the eyes of a doctor and a patient”, writing letters addressed to “Dear Cancer…” and “Dear Chemo…” She has also published two books, The Other Side and The Bright Side, all while continuing her specialty training.

Not surprisingly, Kate’s work has attracted considerable media interest and #hellomynameis has even been backed by the Health Secretary Jeremy Hunt MP who said doctors should remember that “every patient is a person”. The central focus of the campaign is simple: to remind, encourage and inspire staff to introduce themselves to every patient they meet. But, Kate emphasises, it runs much deeper. “It is about providing truly person-centred care,” she says. “It’s about remembering the person behind the disease or condition.”

It was during a holiday in California with her husband that Kate first began to feel unwell with tiredness and back pain.

“The doctors found very quickly that I had acute kidney injury with a creatinine of 600,” Kate explains. “A CT scan showed multiple soft tissue masses and extensive lymphadenopathy throughout my abdomen and pelvis. By this point I had worked out that I had cancer, well before the American doctors, I think.”

Kate returned from the US with a provisional diagnosis of ovarian cancer. After an MRI, an FY brought devastating news. Kate remembers the moment vividly: “A junior doctor I had never met said that I had liver and bone metastases, when I was alone, with no warning shot. There was no checking my baseline understanding and he couldn’t leave the room quick enough. I never saw him again and the nurses were unaware I’d just received my death sentence.

“I was left deeply distressed, knowing that I was going to die.”

The diagnosis was later confirmed by her consultant oncologist but this time the discussion went very differently. “He sat on my bed, held my hand and broke the news gently that this was the worst case scenario and that I had a very aggressive form of sarcoma called a desmoplastic small round cell tumour.

“He then sat in silence, which allowed me to release my emotions and cry. He was also extremely gentle in his communication of what the next steps entailed.”

Kate had reservations about chemotherapy, but accepted it on the understanding that her consultant would support her if she decided to end her treatment.

The stark reality of this “death sentence” was a far cry from her life just six years before when she qualified with honours from Edinburgh University with ambitions to become a geriatrician.

Her unique perspective as a doctor-patient means Kate can interact fully with her doctors, helping her feel in control of her treatment. It also allowed her to negotiate a few days’ leave from hospital to attend a friend’s wedding in June, when doctors agreed she could administer her own meropenem.

But she concedes it is a double-edged sword. “I have the knowledge to interact with my healthcare team at the same level but that is not always a good thing, as you know what might be coming with a particular procedure or treatment.”

Not just a disease

Kate hit upon the idea for the #hellomynameis campaign during a hospital stay when she noticed a lack of introductions from many members of the healthcare team. When staff did take the time to introduce themselves, she found it made a huge difference to how she felt as a patient.

It made her determined that doctors should “see me, not just my disease”, and she has delivered talks to healthcare professionals across the country on the importance of communication skills and the other “little things” – holding a hand, taking time to listen – that make patients feel more reassured.

“I began to tweet about the campaign and it became clear that my experience was not unique,” she says. “I wrote a blog and invited healthcare staff to pledge their support. We designed a logo to give the campaign a visual identity, and put together a website – www.hellomynameis.org.uk – where you can find free information and resources.”

The hard work appears to be paying off with lots of Kate’s 26,000+ Twitter followers offering their support, many buying branded #hellomynameis name badges sold in aid of the Yorkshire Cancer Centre Appeal.

Despite her situation, Kate is determined her illness will not be “a negative entity”. “Even though I am going to die prematurely,” she says, “I want to leave real, positive and tangible legacies that improve care for many patients to come.”

While poor communication is often the result of workplace pressures, Kate is encouraged that these skills are becoming an increasingly prominent part of medical training.

“Holding up a mirror to this suboptimal care is uncomfortable but essential for us to improve,” she says. “Everyone needs to buy into quality improvement as an idea and we need to start measuring what we do properly so we can see the effects of improvement work. Small changes can have a massive impact.”

Aggressive treatment has enabled Kate to keep working, something which is extremely important to her. “When I was first diagnosed I went through five cycles of intensive inpatient palliative chemotherapy,” she says. “That was extremely tough and I was in and out of hospital with complications. It did dramatically shrink my tumours, though, enough to eradicate my pain and prolong my life.”

This treatment ended in January 2012 and an unexpectedly prolonged period of disease stability allowed her to return to work and live a relatively normal life.

But in September last year, she began to feel unwell again and discovered an enlarged lymph node in her left supraclavicular fossa. A CT scan showed progressive disease. “Deciding whether or not to have further chemotherapy was so difficult. I constantly cycled between thinking ‘no leave me alone’ and ‘yes come on let’s give this a bash’. After much soul searching, I chose to have more treatment.”

Kate’s disease has responded well but the tumours in her pelvis have not changed, leaving her with difficult-to-manage ongoing pain.

“Perhaps the most annoying long-term effect of cancer treatment has been subtle cognitive impairment,” she says, “most noticeably reducing my ability to multi-task and slowing my thought processes. For this reason I don’t do on call work anymore, perhaps one of the major bonuses of dying from cancer!”

Kate is equally busy when the working day ends. “I love to cook and entertain friends and family. I play the flute and enjoy swimming. I also have a ‘bucket list’ which has kept me busy over the past three years. My husband Chris and I have renewed our wedding vows, visited Paris, Barcelona, New York and California, I’ve had a tattoo and spent time recreating treasured childhood memories. I am also jumping out of a plane in August.”

“I do have some dark days when I feel low and scared but there are so many good things in my life,” she says. “Every day I see the #hellomynameis campaign spreading. Patients and carers are telling me what a difference it is making and that keeps me motivated to keep on sharing my story.

“I have precious little time left and if I am going to make this idea fly then I have to dedicate some of this time and energy while I am well.” 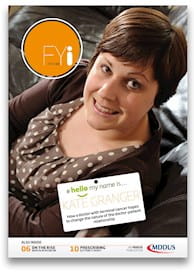