Medicine is his "day job"

BEING asked for his autograph during a patient consultation is not something Ranjit Singh would have considered at all likely when he began studying medicine back in the 1990s. But for Dr Ranj – as he is now almost universally known – being recognised in this way has become something of an occupational hazard.

Well, fronting your own BBC children’s show and having a regular slot on ITV’s This Morning programme will have that effect on your life. Not to mention the many public appearances – on TV, radio and in person – that Dr Ranj makes in his hectic schedule, whether he’s talking about self-harm on Radio 1, raising money for Children in Need, presenting a BMJ Award, or even appearing in a Christmas panto.

“It’s a really surreal experience, because it’s not something that I had ever been used to,” says the 34-year-old, whose “day job” – he still calls it that – is at a central London A&E where he is a sub-specialty trainee in paediatric emergency medicine. “I’m at work, so I can’t really be spending time giving out autographs and taking pictures. But I appreciate why they ask, and I use it as a sort of bravery award now, just to say, awww, here you go.”

In fact, he says that when children recognise him, it often helps them to relax and promotes an informality that is a big part of his approach to patients. “For lots of people, Dr whatever sounds very formal. I always introduce myself as Ranj. My whole ethos is about being approachable.”

Icky stuff and all

Taking the formality – and the fear factor – out of healthcare was one of the goals he sought when he took time out from his training to work on the concept of what was to become the CBeebies show Get Well Soon. Aimed at pre-school children, the show features puppets, games, a doctor’s surgery run by Dr Ranj and songs about medical issues from verrucas to vaccinations – not forgetting the mucky subject of poo.

“Children like honesty and they like humour,” says Dr Ranj. “For an adult, talking about wees and stuff , it’s a bit icky, but a pre-school child loves it. It’s about sneaking in education and take-home messages whilst children are having fun. That’s the best way of learning. It’s the way I learned as a kid.”

He had already started making the odd appearance in the media as a “couch doctor”, talking about medical matters, and people were always asking him if he’d thought about screen-testing to be a presenter. This got him thinking and he came up with the idea of a medically based programme for children. He took it to his friend and fellow choir member, Simon Hickson, who had worked in children’s TV for years as part of the comedy duo Trevor and Simon.

Hickson liked the idea, set up a meeting for Dr Ranj with a production company, Kindle Entertainment, and they agreed to help develop the show. This involved changing the original target audience, which Dr Ranj had foreseen as 6–12 year-olds, to pre-schoolers.

“I thought, this is probably too complicated for younger kids. But Kindle has a lot more experience in creating kids’ shows and they said, actually, if we create this for a pre-school market, it will be richer.”

It was at this time that the idea for songs was mooted. He laughs as he remembers it. “The people at Kindle said, ‘Hang on, you know Simon through choir, right? How would you feel about singing on the show?’ And I thought, you know what, I’ll give it a go. And I think it’s been one of the most popular parts actually.”

The songs, based on modern and old-school classics, are indeed very catchy, and if you listen to them a few times do not be surprised to find yourself singing lyrics like “where does your poo come from? Why does it stop? Stay in your bottom and not make a plop. Don’t squeeze or strain or do it in a rush. Soon you’ll be finished then you can fluuuuush.”

But there’s always a serious intent, and Dr Ranj is extremely proud of the way they have managed to communicate some very complicated medical concepts, such as diabetes, to this age group. “Loads of families have contacted me, saying thank you, because now I can show this to my child and their friends and they can understand what’s going on.”

As is the nature of these things, Dr Ranj’s appearances on Get Well Soon did not go unnoticed by other media executives. A meeting with ITV led to appearances on the This Morning programme, where as a ‘couch doctor’ he has dealt with a wide variety of issues, from constipation to meningitis to self-harm. After wowing audiences, ITV have now rewarded him with his own regular slot on the show, Growing Pains.

It all helps him to further his ambitions regarding health promotion, he says. “It’s a family audience and we get to tackle some really, really serious issues.”

Of course, having a dual career as a hospital doctor and a media doctor will pull a person in many directions at once. So after the career break that saw the birth of Get Well Soon, Dr Ranj took the decision to go part-time, so that he could cope with the competing demands on his time.

He was just starting his ST5 year and had to make a case for it to the Deanery and to his supervisors. “It wasn’t a decision I’d taken lightly. But I thought that if an opportunity comes up that’s too good to miss, I’d like to give it a shot.”

It’s quite an unusual step in medicine to go part-time for non-family/childcare reasons and he doesn’t shrink from the difficult questions his status as both media personality and part-time trainee has raised. As he explains: “I don’t think that part-time trainees always get the level of respect that full-time trainees get, because people assume that you’re lazy. And if you’re a media doctor, I’ve heard people say that maybe you are not good enough to be a normal doctor.”

Not surprisingly, this does not reflect Dr Ranj’s view of his own situation. “Going part-time has allowed me not only to continue the clinical part of my job, but also to play this other immensely important role that I’ve carved out. And although my training has extended from three to six years, it hasn’t been detrimental at all. In fact I think it’s been a very positive thing. You know, full-time medical training is a lot of pressure, there’s a lot to do, and I would find that sometimes I barely had room to breathe, but now I can. I find that I have more time to consolidate what I’ve learned, to really make the most of my clinical experience.”

For the future, Dr Ranj is looking to develop both parts of his career equally, eventually qualifying as paediatric emergency medicine consultant. He is also having meetings about taking Get Well Soon forward for another season, and hopes to get some other shows off the ground. “I’m constantly trying to think up new ideas, all medical, and pitching them to production companies.”

He agrees that his has not been an orthodox way to pursue a medical career, but he’s having fun, he says, and advises young people starting out not to forget the importance of that. “Don’t lose your passions just because you’re a doctor and it tends to take over your life. It’s very easy in medicine and clinical training to just start at the beginning and go through the sausage factory and come out at the end.

“Don’t just settle for the norm. You know, if you have a passion for something, push for it, and be open to possibility. I’m not saying that everyone’s going to go out and try this media thing, because it isn’t for everybody. “But I hope I have managed to give people the impression that, you know, you can have a laugh and have a career at the same time.” 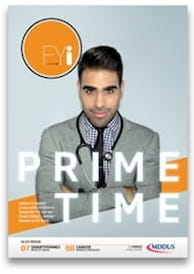