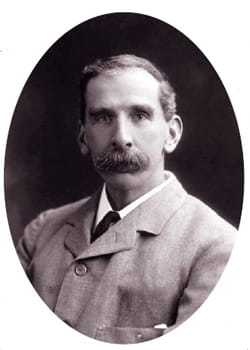 VICTOR Horsley was a bold and inventive neurosurgeon. In 1908 he developed along with Robert Henry Clarke a revolutionary stereotactic frame. The Horsley-Clarke apparatus located fine points within the skull and brain using geometric measurements. His work at the Brown Institute contributed to the surgical and medical treatment of thyroid disease and he was also partly responsible for the eradication of rabies from England. In addition he was an energetic and aggressive medical political reformer, sometimes blunt and offensive to colleagues but gracious to his patients.

Victor Horsley grew up in a prosperous, artistic and musical family in Kensington. Naturally left-handed he became ambidextrous, an asset for a surgeon. He was educated at Cranbrook School as a day boy and developed his own strong views. He was firmly against tobacco and alcohol and observed that women were as capable as men and later supported many causes including franchise and registration of nurses. He was at ease in French and later learned German and published in both languages.

At University College London he studied medicine and won the Gold Medal for anatomy, then first class in physiology. He experimented on himself with ether, chloroform and nitrous oxide, carefully observing the sequential effects of the drugs on the brain and nervous system. By 1881 he had qualified as a scholar and held the Gold Medal in Surgery. After graduation he spent a year in Germany and was awarded FRCS in 1883.

Between 1884 and 1890 Horsley was superintendent of the Brown Institute, initially founded as a laboratory and hospital for veterinary purposes but also the home of human and experimental pathology. As such it was subject to legal regulation but Horsley was later attacked by anti-vivisectionists. With others, Horsley expanded understanding of the brain and spinal cord, respiratory rhythm, circulation through the carotids, as well as the effects of gunshots and many other topics. After 1890 he was made Professor of Pathology at UCL and started a novel course of pathological chemistry.

As a student he had worked with many pioneers of neurology at the National Hospital Queen Square. In 1886 he was awarded FRS and was given the first appointment of a surgeon there. At that time, Louis Pasteur was doing exciting work in Paris on rabbits to diagnose and prevent rabies. Victor, a fluent French speaker, went to study and to work with the great man, and was given a sample of rabid spinal cord for animal studies in England. That and the pursuit of muzzling of dogs and quarantine of animals eradicated rabies from the UK.

Returning to surgical work he located the focus of epileptic fits and cured the patient by removing the scar. “Bold when sure” he performed complex operations including thyroid cases and removal of tumours and even some daring laminectomies and surgical procedures for trigeminal neuralgia. In 1902 he was made Professor of Surgery at University College Hospital and the same year he was knighted.

Horsely also found time to question and reform the Medical Defence Union (MDU), BMA and GMC. He considered that the recognition of those suitably qualified to practice should be decided by the GMC and not the MDU. At the BMA he chaired reform of its constitution, leading to a large increase in membership. He promoted public health reform, medical inspection and treatment of school children and the state registration of nurses. He formed policy for coroners and death regulation. In his passion for causes he was often careless of offending opponents.

He was an RAMC captain at the outbreak of war and in 1915 was appointed surgeon to the Mediterranean Expeditionary Force in Egypt, then volunteered to go to Mesopotamia where hospitals were ill-equipped. He describes this in a letter to a colleague: “It is very difficult out here some hundred miles up the Tigris on a burning mud flat in the middle of cholera, dysentery, diarrhoea etc etc...” At Amerah he succumbed to heat stroke and died the next day at Rawal Pindi Hospital aged only 59. He had married Eldred Bramwell in 1887 and they forged a happy family life with three children and found time for family holidays.