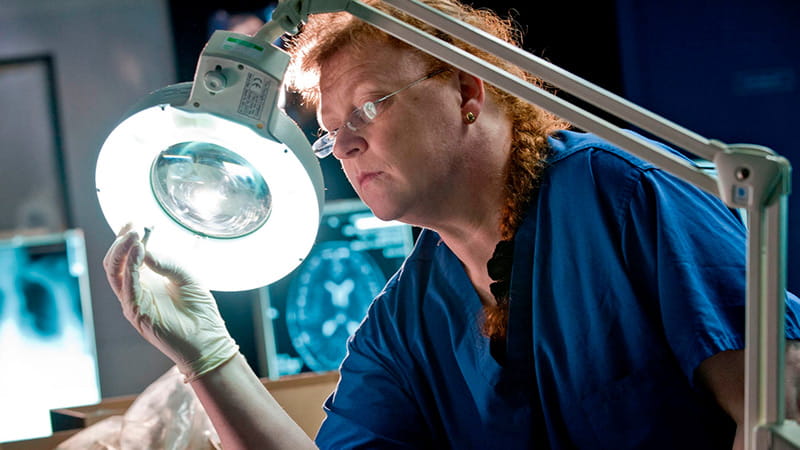 ASK Sue Black which of her many contributions in the field of forensic anthropology she is most proud of, and there is not a moment’s hesitation. It was 1999, in Kosovo, where she had been part of a British team of experts collecting evidence for the International War Crimes Tribunal. At one tragic site, a man had buried 11 members of his family, including eight children, who had been killed in a Serb rocket-propelled grenade attack on his tractor and trailer.

The man agreed they could exhume the collected remains but with one proviso. Speaking from her office at Dundee University, Professor Black explains: “He said, ‘I’m happy for you to do that, providing you can give me back 11 body bags, because until I can bury each member of my family separately, God won’t find them’.”

So she set about the grim task. “We excavated enough to fill two body bags. Then I sent everybody out of the mortuary for the day and I laid 12 plastic sheets out on the floor, because I knew there would be bits I couldn’t identify. Then I slowly went through every single tiny fragment to see if I could identify undeniably who it belonged to. We gave him back 11 body bags and he was able to put each one in the ground and deal with his grief in that way. It was right place, right time to solve a grief that I can’t even imagine.”

Dealing with unimaginable grief is an occupational hazard for the forensic anthropologist. Their remit is to establish the biological and personal identity of the deceased, such as sex, age, height, race and disease status, in cases where all the obvious signs have been eradicated and often there will have been foul play. Indeed, foul play is almost a given in the sorts of cases that pepper the 46-year-old’s career, whether investigating war crimes in Kosovo, Sierra Leone and Grenada, working on a string of domestic murder cases, including that of Fred and Rosemary West, or helping with victim identification in Thailand after the 2004 tsunami and recently in war-torn Iraq.

The need for mental toughness is something she reinforces to her students at Dundee, where she is head of the Centre for Anatomy and Human Identification. “You have to counsel students that you can’t afford to have the flashbacks or anything that interferes with separating your personal from your professional life,” she says. “You have to have a clinical detachment. If a doctor got involved in the emotions of every single patient, they wouldn’t be able to function. We’re exactly the same.”

Professor Black set up the UK’s only undergraduate forensic anthropology course in Dundee in 2003, following a decade away from the academic coal face (prior to this she had been lecturing in anatomy at St Thomas’s Hospital in London for six years after a PhD at Aberdeen). She spent much of this decade assisting police forces in the UK and working for the Foreign and Commonwealth Office on matters of criminal and war related incidents, such as her work in Kosovo, for which she was honoured with an OBE. She also found time to co-write Developmental Juvenile Osteology, one of the definitive textbooks on the bones of young children.

Her decision to return to academia full-time came about largely as a result of her experiences abroad. “What I found when I was taking other people’s students out with me was that the fire wasn’t there. And I couldn’t cope with the fact that, in 20 years’ time, when I fall off the perch, there might not be students there who want to do nothing else but get to the bottom of this. I met students who said, ‘I want to be on television…’.”

Indeed, television and the steady stream of ‘cold case’ programmes like CSI had its part to play in the poor quality of students, she believes. “Prior to the 1990s almost anything that was forensic was related to medicine or dentistry. Then we got all these dreadful TV programmes, books and films and suddenly forensics became really sexy. And universities with a remit that 50 per cent of school leavers had to go into higher education had to produce courses the students would be attracted to. Forensics was the hook.”

The problem, however, was that many of these postgraduate courses didn’t even require a first degree that included anatomy, a lack that Black found absolutely perplexing. “How do you make a credible forensic anthropologist who’s going to stand up in the courts of law and, through your evidence, commit somebody to a time of incarceration or, in Iraq, condemn somebody to a death sentence if you don’t really understand the subject you’re talking about? I cannot believe that comes from anywhere other than anatomy.”

A friend, who is also a senior police officer, suggested that rather than complain about other people’s students, she should “shut up and do something about it”. The result is a four-year course of which she is immensely proud. The intake is 25 students per year and an average pass of 60 per cent is required to graduate from one year to the next.

The bar is set higher than many courses, but Professor Black is unapologetic about what some educationalists might describe as “elitism”. “Frankly I don’t care. We have to be elitist, because the stakes are too high,” she says defiantly.

Another consequence of Black’s work abroad is the Centre for International Forensic Assistance, of which she is a founder and director. This not-forprofit organisation holds a database of experts in the field of disaster victim identification. “Following Kosovo, we realised there were a number of people with a tremendous amount of expertise who, once an incident finished, disappeared into the ether. And when the next incident occurred you were scrabbling around trying to find where they lived, who they worked for – were they still alive?”

It’s a huge step forward in the administration surrounding the international community’s response to mass-fatality incidents. And it is not Black’s only contribution to this area.

Last year Black and a team of academics from Dundee won a two-year contract to train the country’s first national team in disaster victim identification, comprising 500 police officers from every force in Britain. The whole project moved ahead very swiftly and within three months the team completed the enormous task of putting together a 21-chapter textbook, which was then transferred to a virtual learning environment. The course also involves a week of face-to-face lectures and practical sessions, including work on a fictional ferry disaster in the Outer Hebrides, in which ‘victims’ are matched to their antemortem data.

“I have to admit it’s exhausting. But it’s something we believe in very strongly,” says Black.

Her move back into campus life does not mean Black has adopted a hands-off approach to her subject. The day I speak to her, in fact, she is busy working on a murder case. “I’m able to predict the patterns of fracturing that I am seeing on the skull on my computer screen, to give me an indication of what this poor man went through before he died,” she says. Although she has been pondering this case since October, Black says she won’t give up “until we’ve got it right”.

It’s the kind of dogged determination that is key to the making of a good forensic anthropologist and it’s what Black looks for in her students – although, she says, you can’t teach that level of commitment. “Anatomy does that to people,” she says. “You either hated it as a medical or dental student or you loved it – it’s like Marmite, there’s no middle ground. And I want students who, when I’m trying to close the door at five o’clock, say, ‘Can I just have 10 more minutes?’”

Adam Campbell is a freelance writer and editor living in Edinburgh