Interview: Winter all year round

The NHS has faced unprecedented pressures this winter. Insight asks the president of the Royal College of Emergency Medicine, Dr Tajek Hassan, what is needed to put the service on a more secure footing 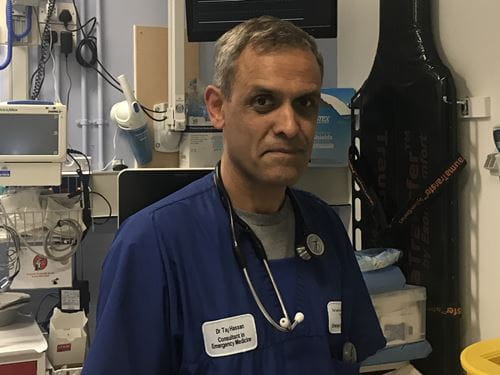 DR Tajek Hassan has been a consultant in emergency medicine in Leeds since 1999. He was elected president of the Royal College of Emergency Medicine in 2016 and on taking up the role in September of that year, he was blunt about the current state of emergency medicine: “Performance is the worst in over a decade due to a host of complex reasons and reflects that the care we deliver to our patients is being compromised all too frequently… change is needed and the present situation is not sustainable.”

Dr Hassan previously served as vice president of the College and also has a range of academic interests including leadership development, acute decision support systems and neurological emergencies.

Theresa May has claimed that the NHS was better prepared this winter than ever. Is this at odds with your experience?

[Laughs] What an icebreaker. I think there is no doubt that a very significant amount of effort was put in to try and prepare ourselves for what we call ‘winter’. But if you look over a three to four year period, urgent and emergency care systems have been under increasing pressure and performance has steadily deteriorated so that effectively what we have created is winter all year round – a sort of chronic crisis mode. And when you add in other factors such as colder weather in the autumn-winter or norovirus or flu, that produces a spike in activity which a resilient system could cope with, but not one that is chronically suffering.

So with due respect to the prime minister, it’s not just semantics, it’s important to be accurate. I think going into this winter period we were very clear that we were ill-prepared and it was highly predictable that what would happen, did happen.

Were the external pressures worse than in past winters?

The flu virus has been the worst in five or six years. We knew also that our bed occupancy rates were far too high going into the autumn-winter period. Safe bed occupancy rates should be at about 85 to 87 per cent. We previously estimated that we needed at least 5,000 extra beds if we were to get bed occupancy down to safe levels. There was also no winter funding until the budget, which was in November, and that was only £350 million – an inadequate figure – which was used to basically shore up balance sheets for Trusts that were really in dire trouble. The bottom line is that a lot of effort was made but the planning was not adequate to meet what was coming.

What measures has the College proposed to deal with the crisis in the short term?

It’s very difficult to plan when you’re in the midst of a storm. The issue broadly falls into two sorts of cohorts. One is the system. We know that the medium-term solution is to invest more money in social care so that there are more community care beds and more community care packages for patients. Our DTOC [delayed transfers of care] rate in hospitals is way too high, on average around five per cent but actually in some systems it’s much higher. That is a big medium-term issue.

The other thing we have been campaigning on for quite a long time is ensuring there are enough acute beds in our systems. As I said, around 85 per cent is regarded as safe practice so it was disappointing to see NHS Improvement put an acceptable bed occupancy rate at 92 per cent, which is because that was all they thought might be achievable on a really good day. But that’s not sensible. The latest figures show we are at 95 per cent [early February] and that means a significant number of systems are effectively at 100 per cent – because it’s an average.

What that means in actual fact is that you don’t get flow within a system and you get very crowded emergency departments. Crowded emergency departments then lead to delays in assessment, delays in diagnosis, delays in basic interventions like pain relief and antibiotics and other therapeutic delays. That leads to increased harm in patients which then leads to increased litigation and even more money sucked out of the system. So at the moment we’re shooting ourselves in both feet by not investing wisely.

But your question is what could we do in the short term. In order to create a bed overcapacity or be at capacity there are two options. One – we can cancel elective care and that was done as an emergency measure. Over 50,000 operations were cancelled.

Has that eased the pressure?

I think it’s a transient Elastoplast on a creaking system – and of course it has consequences for those patients who have had delayed operations. Some of them will deteriorate and end up in the emergency department which will add to the pressure even more.

The other option which a number of systems are doing is this concept of full-capacity boarding, which basically says if the emergency department is very crowded, say with 40 or 50 patients ready for a bed, every ward should take an extra one or two patients on a trolley. So you end up spreading the risk around the hospital rather than focusing it all on the emergency department.

Has staffing been a serious issue?

Yes – that’s the other big bucket. There’s no doubt that the NHS is chronically understaffed. I can only speak for the clinical workforce in emergency departments and in the short term we are struggling badly. However, there is some light at the end of the tunnel. Last October, after nine months of negotiation, we launched probably the most comprehensive workforce strategy in College history – a comprehensive plan for growing the workforce, reducing attrition amongst trainees and retaining the older workforce. We hope over the next four to six months that we can begin to drive that forward. It is a four-year program but we really want to get it up and running in the next few months so that it begins to bear fruit by this coming autumn.

Is there currently an overreliance on locum and agency staff in emergency medicine?

Yes. We are spending around £2.9 billion on locum and agency staff in the NHS and about £464 million of that is being spent in the emergency department per year. So that was a key driver and a lever behind the workforce strategy – to put something sensible in place and drive down that cost.

Are you worried about the effect of all this negative publicity on recruitment to the specialty?

I have been doing emergency medicine for a long time and in the last 30 years being a doctor, on numerous occasions people have said ‘oh, there is a massive crisis in emergency medicine, nobody will go into the specialty, it’ll be awful’. However, against the odds, we’ve continued to slowly grow as a specialty, though we are still a long way short of the staff numbers we need. But if you take the broad trend, emergency medicine is a very strong specialty with a lot of passionate people. We can only hope that it will continue to grow in the face of adverse conditions.

Such unprecedented stress on the NHS leads to the obvious worry of staff burnout. How to you personally de-stress?

Everybody is different but it’s a big issue for emergency medicine because we are always at the top of the list when it comes to burnout. Six years ago we developed a College strategy on burnout called Creating successful, satisfying and sustainable careers in emergency medicine. You can check it out on our website. It’s an area I’m very passionate about.

Personally I tend to have a glass half-full approach to life. I have a great family. My kids are ages seven to 12 and they and my wife keep me on the straight and narrow.