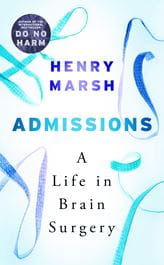 A life in brain surgery

THE bestselling author of Do No Harm returns. Three years on, Henry Marsh has now retired as an NHS surgeon and, in between operating in Nepal and Ukraine and single-handedly renovating a tumbledown lockkeeper’s cottage, he shares more insights into his life as a brain surgeon.

Marsh is again brutally honest about his personal life, the difficult clinical decisions doctors must make every day, the outcomes of his interventions as a surgeon and the daily struggles of working in the NHS.

After battling with mental health problems while a student at Oxford (he abandoned his initial degree), Marsh took up the role of a hospital porter. It was in the theatre that Marsh found a “sense of purpose and meaning”. He fills the pages of Admissions with the highs (“wonderful triumphs”) and lows (“the triumphs wouldn’t be triumphant if there weren’t disasters”) of his life as a surgeon.

Marsh tells us that his career in the NHS ended “ignominiously”, first after a decision to resign “in a fit of anger” in the summer of 2014, then followed by an altercation with a member of staff over what Marsh describes as unnecessary ‘tick-box’ exercises overcomplicating clinical care in the modern NHS. He shares his thoughts on the “sad decline of medicine”, and rues the seemingly inevitable collapse of the NHS.

Ever insightful, Marsh reflects on the frustration, anxiety, humiliation, anger, elation and privilege he has experienced as a neurosurgeon. He shares stories of life and death, both in his personal and professional life. He considers the issues affecting the practice of medicine in the modern world (in both developed and developing countries), from the inherent tension between caring for patients and making money, to treatment at the end of life, with Marsh sharing his thoughts on euthanasia.

The cottage by the canal will be Marsh’s woodworking workshop (this, he says, will help him cope with retirement). There he will swap patients for timber, paying as much detail to the grain of wood and type of join as he did to the sulci and gyri of the brain.

A few have questioned the need for a further memoir from Marsh. The reactions from across the world, however, have silenced the critics. Marsh describes neurosurgery as the “all-consuming love of [his] life”, and his writing reflects this. It is a joy to read.