Ethics: "Please not another toolkit": on meeting ethical distress

Professor Deborah Bowman shares insights from her research on the ethical experiences of practitioners during the pandemic. 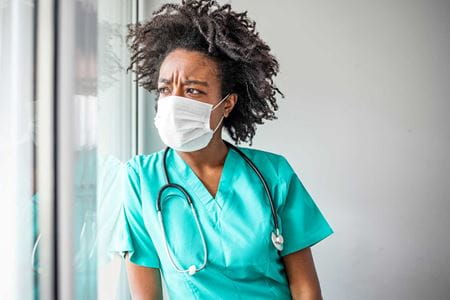 IN January, deep into the second lockdown when the news was dominated by Covid-19 and its devastating impact, I was commissioned by the Professional Standards Authority to conduct research into the ethical experiences of practitioners during the pandemic.

The participants were drawn from all the professions that are subject to statutory regulation and ranged from doctors (in diverse specialties) to optometrists, and from allied health professionals to dentists. I also spoke to those working in medical defence organisations, professional bodies and regulators about their perceptions and experiences of the ethical dimensions of clinical practice during the pandemic.

Rarely have I done anything that has absorbed me as much as this study. I have described it as ‘heart and head’ work. It was moving and intellectually demanding. The experiences that people shared were deeply affecting and unforgettable. Painful ethical challenges in relation to intensive care were brought into sharp focus when a physiotherapist described, in detail, what proning (a technique she had previously used only rarely) meant in practice.

I heard too about ethical questions and concerns that had not been much discussed: questions about visitors, the meaning of ‘care’ in a system stretched beyond breaking point, the quality of notes for those patients whose families would come to rely on the medical record as testament to final days, support for those with chronic disease, the impact of reduced services, health inequity and the extraordinary choices people made as they balanced professional and personal responsibilities.

There was much that I heard that will stay with me. There were two aspects that continue to preoccupy me. First, the concept of judgement recurred: it is cited in professional guidance often and never more so than during the pandemic. Yet, it is also an elusive concept that was considered difficult to define and few, if any, participants could recall explicit discussion of, or learning about, judgement in their training. Given the frequency with which judgement is invoked in professional standards and regulatory expectations, this is an omission.

Many practitioners were using their judgement in ways that appeared wise, considered and effective as they balanced competing interests and responded to guidance that was great in quantity, but variable in quality. However, the burden of doing so was evident. For some, what it means to model and enact judgement in clinical practice had never been more important and less clearly articulated or discussed.

The second, and perhaps unsurprising, theme in all conversations was the extent of moral injury and distress. This was specifically moral in character. It arose because professionals were unable to practise in a way that aligned with their values and/or when they saw others, especially managers and political leaders, behaving in ways that undermined the ethical standards that had been set during the pandemic.

I heard from nurses who knew that they were not providing optimal care because there were simply too many patients and too few staff. I listened to dentists talking about the decisions they were asked to make regarding patients in pain early in the lockdown.

Optometrists and pharmacists told me about the tensions between the commercial pressures from their employers and their wish to protect the safety of their customers. A doctor described his loss of trust when a senior manager facilitated a visit for a family friend at a time when his patients were dying alone. Care home staff told me of the gap between the realities of their experience in nursing homes and the political rhetoric that dominated news programmes.

What then might we do in response to the legacy of that moral injury and distress? One participant memorably replied: “please, not another toolkit”.

The work of Margaret Urban Walker on moral repair focuses on three elements: voice, validation and vindication. It is pragmatic work that does not overclaim. It does not represent moral repair as an absolute or something that is always possible.

However, Walker does suggest that moral communities – which may not involve all those who have caused harm – can rebuild trust and hope for those who have been morally injured if they take the time to attend to the effects of that injury. To do so, there are practical steps such as listening with care to the experiences that caused harm, attributing responsibility fairly and offering reparation to those who have been harmed. This is easy to write and hard to do. Yet, it is essential.

Burnout, despair and frustration abound in the NHS and care sector. Society seems to have moved unthinkingly from clapping to complaining as staff struggle to catch up with the backlog and plan for future waves of Covid-19 and possible vaccination campaigns.

Moral repair and recovery are everyone’s concern. Without it, we are all diminished.