Turning the other cheek?

What should doctors do when confronted by racist behaviour from patients? Risk adviser Kay Louise Grant offers advice 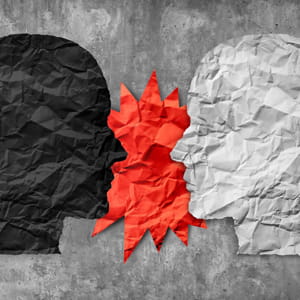 RACIST abuse directed towards NHS staff by patients appears to be on the rise. A recent ITV report found that recorded racist attacks against NHS staff increased from 589 in 2013 to 1,448 last year – a 145 per cent jump.

The report featured a moving interview with Mr Radhakrishna Shanbhag, who has worked as a senior NHS surgeon for more than 20 years. He described how a patient request to be operated on by a “white doctor” left him feeling “devastated” and gave him cause to reconsider his position in the health service. Unsure of how he would be supported in the event of a complaint, Mr Shanbhag reluctantly agreed to enquire about an alternative surgeon.

A nurse from the Philippines also told ITV that racial abuse from patients happened so frequently that it was becoming normal and she felt there was no point in reporting it. Although the reason for the rise in abuse was unclear, it is thought that contributing factors may include a greater willingness to report, as well as changing attitudes in the wake of political events such as Brexit.

The report sparked much debate amongst clinicians about how best to respond to racism. Some said such behaviour should never be tolerated. But many agreed that ignoring comments or adhering to racist requests is the simplest solution, despite acknowledging it rewards bad behaviour.

So should you simply carry on treating a patient despite feeling abused and threatened? Can you refuse to treat such patients or have them transferred or removed from your list?

Whatever the reason, it is important to state that such behaviour is unacceptable and doctors should never be expected to tolerate it. Your hospital/trust/health board should have a policy in place to offer guidance in this area, but below are some practical tips.

Depending on the seriousness of the incident and the level of offence caused, there are a range of potential responses.

A patient asks for an ‘English-speaking’ or ‘non-foreign’ doctor. It may be enough to politely explain that such a request is inappropriate and emphasise you are fully trained and qualified. Clearly document any discussion and action taken in the patient record. Should such behaviour persist, you should then escalate the matter to a more senior colleague.

Verbal abuse or threats. First, stay safe. If at any point you feel threatened, take steps to safely end your care of that patient. If necessary, seek assistance from security or the police. Such behaviour may understandably result in a breakdown of trust to the point where you no longer feel able to treat the person. If so, seek help from a senior colleague and be mindful of the GMC’s Ending your professional relationship with a patient, which has a section on patients who have been “violent, threatening or abusive to you or a colleague”. Key considerations include making factual and objective notes in the patient record and ensuring appropriate arrangements are made for the patient’s continuing care. You should also be prepared to justify your decision. In delivering care where any delay could result in patient harm, MDDUS advises that you prioritise urgent care needs before taking any action to transfer care to another doctor. Your organisation’s policy should have clear guidance on how these situations are to be handled.

Record of events. Keeping a diary of events can be a useful tool in reporting abuse. Take note of what happened, when it happened, who was involved and what witnesses there were.

The British Medical Association offer specific advice for employers when dealing with reports of discrimination and how to act on such concerns. They stress the importance of “effective implementation of appropriate policies”. Employers are also reminded of their duty under the Equality Act 2010 to protect their staff from discrimination relating to race, gender, religion or other protected characteristics.

Despite this, a recent study carried out by the GMC, Specialty, associate specialist and locally employed doctors workplace experiences survey, found that many doctors still feel unsupported in their organisation. One survey question asked about the challenges doctors face in the workplace, including abuse. A quarter of SAS doctors answered that they disagree/strongly disagree that their working environment is a fully supportive one, and over a third of SAS doctors and a quarter of locally employed doctors disagreed that they were always treated fairly.

One consequence of this is that doctors may feel reluctant to report or seek help when faced with abuse. This could negatively impact a doctor’s wellbeing, which could in turn impact their ability to deliver a high standard of patient care.

With the current NHS workforce crisis, it is more important than ever that staff feel supported and safe in their organisation. Where the demands of the hospital seem to be put before the wellbeing of the doctor, this sends a harmful message that can deter staff from speaking up.

In response to the ITV report, Matt Hancock, Secretary of State for Health and Social Care, wrote to all NHS staff in England stating: “If a patient asks to be treated by a white doctor, the answer is ‘no’. Your management must and will always back you up.

“We are very proud that everyone in the UK is entitled to healthcare at the point of delivery, according to need not ability to pay. No one is entitled to choose the colour of the skin of the person giving that healthcare.

“We all need to act to ensure racism in our NHS is eradicated. It is not the responsibility of those who suffer racist abuse to challenge it alone.”

Kay Louise Grant is a risk adviser at MDDUS

This course is aimed at hospital doctors and is designed to build on the requirements associated with obtaining valid consent.

In part one of this two-part series of videos, we look at the essential medico-legal points relating to death and end of life issues

In the second of our two-part video module we turn our attention to three specific areas unique to end of life care: resuscitation decisions, advance care planning and requests from patients intending to end their own lives...