IN my experience, when ethics comes up in conversation, many doctors develop a pained or puzzled look. But in working with patients, helping my trainees or answering complaints at the office of the Scottish Public Services Ombudsman, I am increasingly aware of ethics being a part of most of the decisions that doctors make. No doubt it can create feelings of uncertainty but I hope my back-of-an-envelope explanation will make ethics less something to be unsure about and more of a useful tool to help work our way through the increasing challenges of modern medicine. I should make it clear from the start that I am no expert – but maybe this leaves me well placed to present this simple and practical guide.

Ethics is nothing more than a system of principles or values which can help us in decision-making. It is not necessarily about discovering what is right. In medicine there are often contrasting views that have their own legitimate morality (morality = a personal, intuitive sense of what is right or wrong). This is when ethics is required. When used to decide these issues, ethics has to justify the path taken.

For me, one thing that causes uncertainty around medical ethics is the language used. It is arguably over-complex but it can be simplified. There are also multiple ethical theories, thought out by great minds. The kudos due to those responsible is not to be ignored but if we try to remember them all we would never, in my opinion, put medical ethics into practical use.

Some of the better known theories are:

Ethicists Tom Beauchamp and James Childress devised this approach to ethics. It has aspects of many other schools of thought and it is the model most commonly applied to medical ethical problems. The Four Principles are:

Non-maleficence and beneficence would typically be associated with consequentialism, and autonomy and justice with deontology.

The Four Principles are easy to use. Consider the last patient you saw and apply the Four Principles to one of the problems they presented to you. Every case will vary in how much each of the principles will be relevant but that is the beauty of this approach. It is flexible and can be altered depending on the individual circumstances. One way to visualise this is to draw a box as below and alter the area each principle occupies by size depending on its importance in the case being considered.

Consider a 14-year-old girl attending the surgery asking for the contraceptive pill. Assume her doctor has determined that she is Gillick competent. This is my own simplistic take on this case. See how the size of the individual boxes alter and change depending on the individual circumstances presenting. 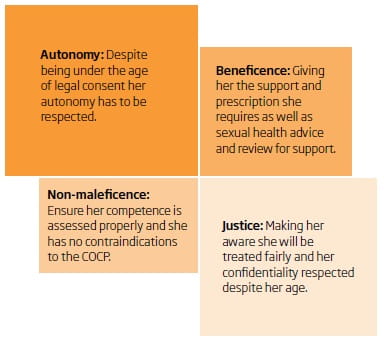 I had a particularly difficult case some time ago. A patient we know well had presented to our nurse for a routine review. She had coincidentally been noticed to have a terribly swollen abdomen. When asked about it, the patient advised she thought it was due to her alcohol-related liver disease or a tumour. It had been like this for some months. Our nurse offered to get one of the doctors to look at it for her. She firmly declined. She advised that if it was something nasty she did not want to know and she planned to keep enjoying herself and “go out on a high.” Our nurse was convinced the patient understood the implications of her decision. She was sober and retained capacity to make her own decisions. I had to advise that we could not intervene but leave an offer open to see her at any point if she changed her mind. 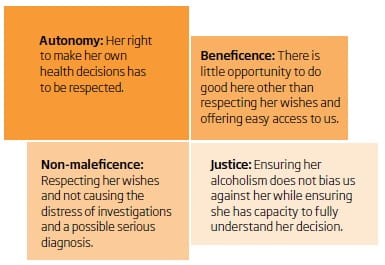 Using the Four Principles has also been helpful to me in my role as a medical advisor at SPSO. I wonder if we all used them more, would complaints reduce? Consider the proposition point by point:

• Autonomy – Respecting the individual’s right to choose and involving them in decision-making would eliminate many of the complaints I see where the patients felt excluded from important decisions.

• Beneficence – It is my opinion that most doctors have empathy with their patients but many of the complaints I see would not have arisen if the doctors involved had been kind.

• Non-maleficence – Some complaints about medical error occur when the doctor has been trying a bit too hard rather than sitting back and involving the patient in the decision-making process. One example of this is drug side-effects where the medication could have been avoided if some simple discussion and negotiation between doctor and patient had taken place.

• Justice – Many patients (particularly those in prison) complain because they feel they have either been treated unfairly or discriminated against. While these episodes are rare, we all have our inner prejudices. Taking a moment to do a quick check to ensure we are not allowing these to influence our professional decisions would, I am sure, lead to happier patients and doctors.

Why not try to apply the Four Principles to your practice?