What are you wearing?

Is it a positive thing that doctors now dress less formally or were the days of white coats and smart suits the era of true medical professionalism? 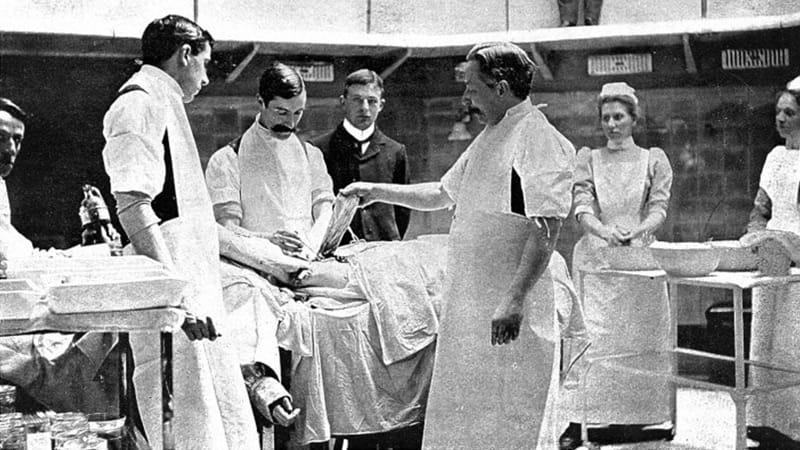 IT was the ancient Greek physician Hippocrates who said that doctors should “be clean in person, well-dressed, and anointed with sweet-smelling unguents.”

And at the turn of the 20th century, as the medical profession established its reputation for professionalism and expertise, its practitioners were indeed well-dressed. They subscribed to a strict dress code that, for men, consisted of a formal jacket, shirt, tie and waistcoat, with white coats emerging in the late 1800s. Images of women doctors from this era are harder to come by but dress codes seem to be equally formal, with high-collared blouses and long skirts featuring.

It’s a far cry from today’s less formal approach where jackets, ties, long-sleeved shirts, watches and white coats were all abandoned in 2007 in the name of crossinfection control. But has the relaxation of dress codes gone too far and would patients prefer to see their doctor looking smart and therefore more “professional”?

One snapshot of opinion emerged in a recent article in the Clacton Gazette. It reported how the chief executive of Colchester’s two NHS hospitals called for an investigation into the clothing worn by junior doctors following concerns from members of the hospitals’ Patient Environment Action Team (PEAT). In a report to senior hospital executives, PEAT detailed issues about what was deemed to be “inappropriate attire”, with one trainee spotted wearing ripped jeans.

Andy Patrick, a lead governor who wrote the report, reportedly said it was feared the junior doctors’ casual clothing would make elderly patients “anxious”. Chief executive Gordon Coutts promised to look into the matter, saying: “Some appear very smart and some look less smart than we would like them to. Without a specific dress code it has allowed it to become a bit fluid. One of the benefits of uniform is to have a standard appearance and people are immediately recognised as to what their role is.”

Historical images held by the Wellcome Library in London show how doctors’ clothing choices have changed. One image (above right) shows a very dapper looking Dr Basil Hood, 28, of the St Marylebone Infirmary in 1904 in full formal attire, including long jacket and waistcoat. This was the uniform of choice for trainee doctors too as an image taken in London in the 1920s shows a group of medical students, in their best threepiece suits, getting to grips with a multiple stethoscope.

This dress code varied little for surgeons. An image from an operation circa 1900 shows the surgeons still wearing shirts and waistcoats but with rolled-up sleeves and full body-length aprons. Before the advent of aseptic surgery these aprons would often be encrusted with blood from previous surgeries – the greater the staining the more experienced the surgeon was seen to be. By the 1950s and 60s, styles had changed slightly with doctors still wearing a shirt and tie but with a white coat instead of formal jacket. This was the norm until very recently.

The Department of Health’s 2007 dress code guidelines – referred to as the “bare below the elbows” guidance – have played a decisive role in ending the wearing of formal attire in a bid to reduce hospital infection rates, opening the door for a more casual look.

The guidelines were based largely on the findings of two literature reviews conducted by Thames Valley University, one of which looked at how uniforms affect the image of individuals and the importance people attach to this. Amongst its findings were that “patients prefer to be treated by staff who have short or tidy hair and are smartly presented.” The DoH defined good practice for doctors, advising them to “dress in a manner which inspires confidence” because “people may use appearance as a proxy measure of professional competence.”

Many health boards/trusts now have their own dress code policy in line with the DoH’s guidelines, which must balance the need for infection control with the need to maintain a professional image. These generally require tattoos to be covered, jewellery and make-up to be kept to a minimum and the “excessive exposure of flesh” to be avoided. Nail varnish and false nails are banned as are items such as transparent blouses and t-shirts bearing potentially offensive slogans. However, judging by some media reports, dress codes may be enforced by hospital management to varying levels of strictness.

In a recent BMA News article, BMA junior doctors committee vice-chair Andrew Collier said doctors should be able to express themselves in a place where they spend many of their working hours, but that a line needs to be drawn where this affects their clinical work.

He said: “People should be encouraged to be individuals at work but at the same time we have to ensure that clinical standards and professional standards are maintained at all times.”

The BMA’s dress code guidance falls largely in line with the DoH, supporting the ban on white coats and long sleeves and advising doctors to tie back hair and cover tattoos. Guidance from the BMA Consultants Committee adds: “LNCs should ensure that whatever local policies are implemented, assist in maintaining a professional appearance.”

Such dress codes have their critics and not all are convinced of the need for such a strict regime. But while a conclusive evidence base may not be present, it is true that public perception plays an important part in influencing what doctors wear. Perhaps a happy medium can be found, somewhere between a formal three-piece suit and ripped jeans?

Joanne Curran is an associate editor of FYi

MAIN PHOTO: A group of surgeons roll up their shirt sleeves and don full-length aprons to operate, c.1900 (courtesy of the Wellcome Trust)