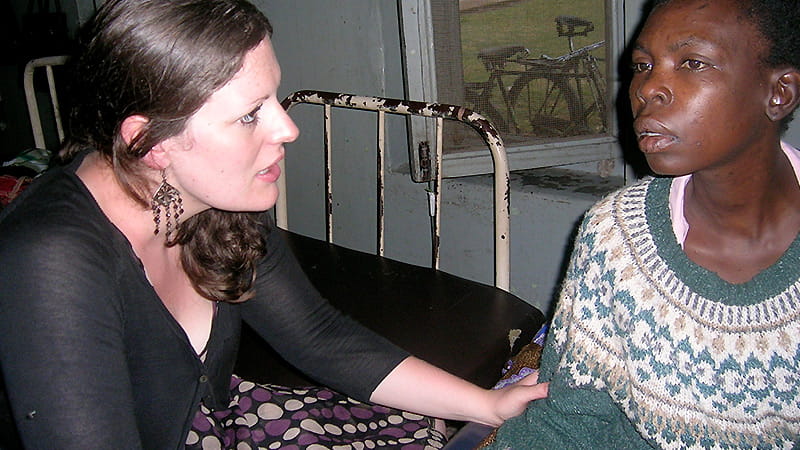 EVER since she was a young girl, Hannah McLean dreamed of working in Africa. Her grandparents were medical missionaries in Nigeria for over 20 years and her mother was brought up there. She grew up hearing stories of their experiences and something about them lit a desire inside her that was overwhelming.

“It was one of my main motivations for going into medicine,” says the 27-year-old F2 doctor. “I felt I really wanted to have a tool that I could share.”

That early dream has long since come to fruition – and as a direct consequence saw her nominated last year in two categories of the BMJ Group Improving Health Awards, the Junior Doctor of the Year and the Karen Woo Award, mainly for her work bringing much-needed healthcare to prisoners in Ugandan jails. The latter, named after a relief charity doctor killed in Afghanistan in 2010, recognises an individual who has gone well beyond the call of duty to deliver care for patients in difficult environments.

But Hannah’s road to medical recognition has been anything but typical: a mere 18 months after starting her medical degree at Nottingham, she put her studies on hold indefinitely. Ironically, though it was Africa that had got her into medicine, she had begun to feel that medicine was keeping her away from Africa. She still hadn’t ever set foot on the continent.

“I started questioning why I wanted to do medicine. I went straight from doing my A levels to medical school. It was very academic. I like the more practical things and I felt like I was re-sitting my A levels and I really started doubting if it was for me,” she says.

In the deep end

Through a friend of a friend, she managed to arrange a two-month stint as a volunteer at the Children of the Nile hospice in Soroti, in north-east Uganda, a local charity funded by an American agency. The charity looks after widows in an area that has seen a lot of rebel activity. Seventy per cent of the women were HIV-positive. Though it was quickly clear to her the hospice was struggling in terms of its leadership, she “shut up for eight weeks and got on with serving them”.

At the end of that period, however, she outlined her vision for what the hospice could be, and her ideas for how to achieve that, including outreach into the community. An American director who was visiting offered her the job of running the hospice then and there. She was 22.

Her main input was to increase the efficiency of care delivery and staff motivation. “The care that was being given was excellent – it was how they were being led. A lot of the problems were to do with finance, staff, wastage. So I kind of tipped it all round – when I got there there were 15 widows using this 100-bed hospice and when I left nine months later, 70 widows able to use it for pretty much the same money.”

She still wasn’t ready to go back to medicine and during a trip to the capital, Kampala – her reputation evidently preceding her – she was offered a job by another charity, the African Prisons Project (APP), as its administrative director.

Coincidentally, the APP had been set up by a fellow student at Nottingham, Alexander McLean, at the breathtakingly young age of 18, after coming face-to-face with awful scenes of deprivation, brutality and ill health in Kampala’s Luzira Prison during his gap year. Hannah and Alexander have since married but they barely knew each other at the time. “I had met him once at Nottingham. I knew he was in Uganda and he knew I was in Uganda but we hadn’t met during the year.”

The scenes that had driven Alexander, now a barrister, to set up APP in the first place were truly shocking, she says. “I had spent a year in Uganda and I’d seen a lot of horrendous things and I didn’t think I could see anything worse. I then happened upon this project working in prisons and I found worse.”

The overcrowding was grave and people were dying, she says, from “the most ridiculous conditions”, including dysentery, malaria, diabetes and high blood pressure, which simply weren’t being treated. “Hygiene is a massive thing. Many of the diseases are passed around by not washing hands and the most simple things – in fact, there’s faeces everywhere, as they still have the bucket system.”

AIDS was rife, as was tuberculosis, cholera and typhoid, and terminally ill prisoners faced a largely unsupervised and painful slide towards death. “My interest at that point was end-of-life care and I’ve seen people with cancer and end-stage diseases die in prison the most awful deaths.”

She spent around six months in Kampala on that occasion, helping to advance the charity’s immediate aims of improving the welfare of prisoners and its longer-term aims of putting in place an infrastructure offering better access to healthcare, education and legal representation. By the end of that period, APP had built a health centre and a welfare centre and developed a library in Kampala’s remand prison. They were also making plans to build a health centre in Gulu, one of the country’s poorest areas, to benefit not just prisoners, but also prison staff and the wider community.

Back to the books

Hannah had also come to a realisation. To do the best she could for the organisation, she would have to return to the UK to finish her degree. “I recognised that I could stay in Uganda and I could be a leader and a manager, but I wouldn’t be able to go and train and spend more time really helping, hands-on, on the more medical issues without completing my medical training.”

There was also a question of credibility and authority, not least because she was a woman – and a young one at that. “A medical degree affords you a status in that environment, which I struggled to get. You have to work and work and work to prove that you’re on the level to have a conversation at the table.”

Back at medical school, her outlook had changed completely. “The faff and the stress just went away, because I had so much more perspective. After I came back, I think I did about a tenth of the work but in a far more focused way and my results went up significantly.”

She continued to work with APP, becoming less hands-on and more strategic – though she admits: “I spent a lot more time than I should have in Africa when I was doing my exams. I wasn’t the most popular medical student. I’d work very hard for a couple of weeks and then head off for a bit.”

That was two years ago, and since then she’s continued in her role as APP’s strategy and healthcare advisor while completing her F1 year at the Royal Derby Hospital – including running a GP clinic in a British prison – and embarking on her F2 training in Mansfield. And if life could not be any more busy she and Alexander have just had their first child. She is currently on maternity leave and planning another trip to Africa. “We’re going to take our son to Uganda in April and spend a couple of months there before I go back to work in August.”

Hannah has been working two jobs for so long that the busy-ness doesn’t seem to ruffle her feathers one bit. It is a sign of the drive and dedication that brought her the BMJ nominations in the first place and, though she didn’t win either, she’s more than happy for the publicity they have brought to the charity.

“I'm very passionate about the work we've been doing in Africa and it’s nice for the project, and what it's achieved, to be acknowledged.”

For more information on the African Prisons Project, visit www.africanprisons.org

Main photo: Dr Hannah McLean helps a woman being cared for at the Children of the Nile hospice in north east Uganda

Meadow, Southall - it's been open season on the expert witness, and recent guidance from the GMC has been long overdue.