Are patient simulators any substitute for the real thing in training doctors? Adrian O’Dowd investigates 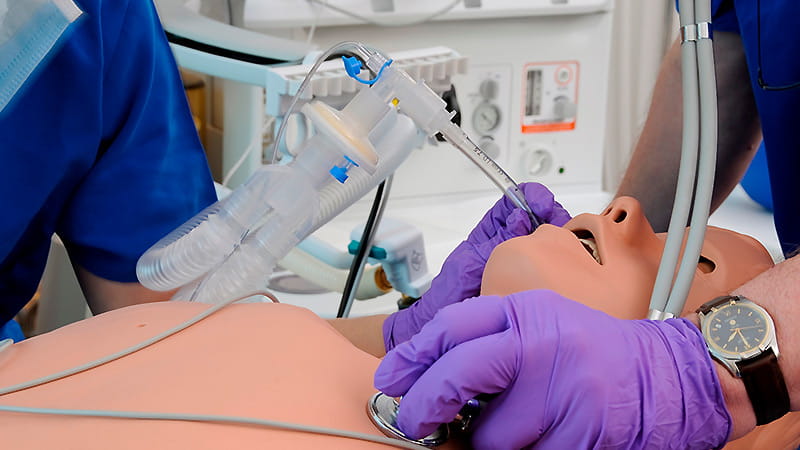 THE PHRASE “practice makes perfect” is often applied in many areas of life but in medicine the stakes can be undoubtedly higher – life and death.

The use of medical simulators is a well-established part of junior doctor and medical student education as a means of ‘risk-free’ training, but some in the profession are questioning its appropriateness and the degree it should play now and in the future in preparing doctors for real-life patients.

Medical simulators can vary widely in terms of their technological sophistication, ranging from the most basic human-like dummies to manikins that have a pulse and heart sounds, and which can talk, blink, breathe, move, cry, sweat and react to drugs and interventions.

The UK currently has around 73 sites that provide some form of medical simulation. Far fewer could be classified as offering more advanced “high fidelity” simulators that allow students and junior doctors to experience simulated situations and procedures including cardiac arrest, trauma, lumbar punctures and laparoscopic surgical techniques. The level of technology available in simulators is evolving and becoming increasingly sophisticated, such as that available at sites like the Bristol Medical Simulation Centre (see below) and the innovative new clinical skills unit of the Royal College of Surgeons of England.

But are such simulators being utilised enough?

A Medical Education England commissioned report published in May 2010 by Professor Sir John Temple addressed the issue as part of a review of the impact of the European Working Time Directive (EWTD) on training for doctors, dentists and other professionals. The report advocates greater use of simulation in medical training, saying that, where appropriate, skills and expertise should be learned in a simulation environment and not on patients. Effective use of simulation could help lessen the impact of reduced hours and shift working – thanks to the EWTD – by accelerating the acquisition of skills and transferring learning away from the patient.

The report argues for increased investment in simulation, which allows trainee doctors to develop a level of competency in operational skills and in dealing with ‘human factors’ such as working as part of a team and managing complex cases. It also recommends that the Department of Health, Deaneries and colleges work together to produce a national strategy for the development of simulation and its inclusion in postgraduate training.

England’s former chief medical officer (CMO) Sir Liam Donaldson has also agreed that simulation is important. In both of his annual reports of 2008 and 2009 he said access to simulation-based training was patchy.

“Doctors struggle to be allowed out of service commitments to attend these courses and increasingly have to pay for them out of their own pocket. Course prices have increased significantly,” said Sir Liam.

He pointed out that various studies of simulation training for surgical skills have shown that surgeons trained in this way make fewer errors and carry out technically more exact procedures. He recommended that simulation-based training should be fully integrated and funded within training programmes for clinicians at all stages.

No substitute for real patients

Junior doctors seem to have more mixed views on the suitability of increased use of simulators as demonstrated at last year’s BMA junior doctors’ annual conference.

Doctors voted overwhelmingly for two parts of a motion that called for all trainees to have access to appropriate simulation facilities for their training and called on the BMA to work with employers, deans and others to ensure adequate provision was made for study leave to allow access to simulators. However, the participants rejected a part of the motion that said learning practical skills for the first time on patients, even with close supervision, was becoming increasingly difficult to justify when high-fidelity simulators existed. In other words, they felt it was wrong to insist that all training be carried out on simulators before junior doctors got to treat patients.

During the debate, Dr Sabrina Talukdar, from north Thames, said: “High fidelity simulators are fantastic. However, access to them varies enormously and I think they are simply too few and too far between.

“Learning practical skills in collaboration with patients under close supervision and with their informed consent is a vital part of our training and always will be. There is simply no substitute to learning on real people.”

But Dr Tom Dolphin, co-chair of the BMA’s junior doctors committee and a junior doctor specialising in anaesthesia in London, believes simulators have an important role to play as an adjunct to training with real patients.

No doubt the use of medical simulators will continue to increase across the UK due to a combination of factors including greater availability and lower price. In England the government is currently giving the issue careful consideration. Dr Stuart Carney is a senior clinical adviser for the medical education and training programme at the Department of Health and also chair of the Technology Enhanced Learning Strategy Development Group which has been charged with producing a strategy for the appropriate provision and use of innovative technologies (e.g. simulation) to support the learning of healthcare professionals. The strategy is due to be published this spring.

“It’s right and proper that people gain experience in simulated environments, before they undertake procedures with supervision,” says Dr Carney. “But as an advocate I recognise the value of simulation only in so far as it is an adjunct to training in the clinical environment.”

Funding is an obvious issue. Dr Carney argues that the question of how much investment should be put into simulators is best left to local decision makers.

“We are anticipating a world where funding decisions are going to be taken locally and simulation is a case in point. Simulation facilities and clinical skills labs up and down the country have been the product of local funding decisions.

“The Department’s role in all of this is bringing together best practice and showing a vision and way forward.”

No matter how it will be organized or funded it would seem a guaranteed place for simulators is assured. Case study: Bristol Medical Simulation Centre “The main benefit of simulators is that you can reproduce many times things that are very rare so that when they actually happen, you can do something right the first time.”

So says Dr Stephen Mather, consultant anaesthetist and senior faculty at the renowned Bristol Medical Simulation Centre (BMSC) – considered to be one of the most innovative and successful high-fidelity simulation centres in the UK. BMSC opened in 1997 as a joint venture between the then United Bristol Healthcare NHS Trust and the University of Bristol and has recently been relocated to a £6 million education centre and is now completely funded by the NHS.

The centre has a core faculty of six clinicians as well as a wider faculty of around 20 people (clinicians and educators) who come on occasion. Expertise is also brought in from the aviation industry, ambulance service and psychologists. Much of the training is on high-fidelity Human Patient Simulators (HPS) produced by METI (Medical Education Technologies Inc, based in the USA) and specifically designed for training in anaesthesia, respiratory and critical care.

Each HPS manikin – or Stan - features realistic skin and pupils that automatically dilate and constrict in response to light. Audible heart sounds can be programmed to mimic arrhythmias and Stan can even go into cardiac arrest, allowing students to practise CPR or the use of a defibrillator. The HPS also breathes with variable lung compliance and airways resistance and can simulate a variety of respiratory conditions including tension pneumothorax which trainees can treat with needle decompression.

Stan also features various sites for checking pulse, interchangeable genitalia for practising catheter insertion and even thumbs that twitch in response to a peripheral nerve stimulator. The system allows users to programme in a specific patient profile or to modify a preconfigured one. Just about anything that can happen to a real patient can be simulated in Stan – from common problems to severe events, such as malignant hyperthermia, anaphylaxis and cardiac tamponade. A bar-code reader allows users to simulate specific drug treatments and dosages and reproduce effects based on specificity, paediatric versus adult dosages, IV versus oral administration, and any specific drug allergy considerations.

The centre has adult, child and baby manikins that can be used to recreate different clinical incidents and critical procedures. The many elaborate functions of these manikins are operated from an adjacent control room, which allows wide-ranging educational scenarios to be created and recorded for later debriefing.

Foundation doctors in particular are seen to be ideal participants at the centre, says Dr Mather.

“We did some parallel educational research and had junior doctors come in for simulation training and assessment voluntarily,” he says. “We found they didn’t match up entirely to what we thought they should know.”

Research on junior doctor competencies convinced the Deanery that they ought to fund foundation doctor training using the centre’s resources and this has also been extended to give final year medical students some team training.

Adapting to what is needed is crucial, according to Dr Mather, who says: “What we are doing now is taking some simulators that are transportable out into the wards where you set one up in a bed. People doing a ward round can see three or four patients and then the next one is a simulator. That is more the future.

Dr Mather adds: “I believe there are probably enough simulation centres in the UK, but they need to be utilised more and need to be put together in a more organised fashion via the NHS. The problem is everyone is doing their own thing.”

Simulators are an important part of preparing doctors for the real world, he says, but have their limits.

“The whole expectation of simulation is that it will increase exposure to things you don’t see very much, but it won’t necessarily make you competent because a simulator is not a person.”