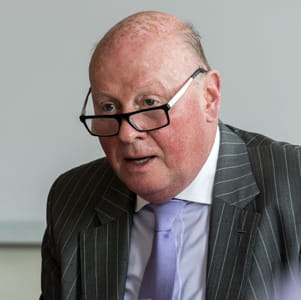 THE MDDUS AGM in September will see the retirement of the current Chairman of the Board – Dr Brendan Sweeney. “Benny” was first appointed as a non-executive director to the MDDUS Board in 1997 and took on the position of Chairman in 2012.

Benny spent 35 years as a GP partner in the same practice in southwest Glasgow before retiring from clinical medicine in 2010. He retains a lifelong interest in the training of GPs and also served as chairman of the Committee on Medical Ethics of the RCGP for seven years. In 2002 he was awarded an MBE for services to medical ethics.

He said: "I have many happy memories of my time at MDDUS and step down safe in the knowledge that my successor, Dr Jonathan Berry, brings a wealth of experience and very safe hands, ready to steer MDDUS through the opportunities and challenges of the next few years."

MDDUS Chief Executive Chris Kenny commented: "Benny has been a pillar of both professional and personal support to me since I took up the role of Chief Executive in 2015, and I have always found him to be approachable, knowledgeable and affable. I wish him well for the future and thank him for his wise counsel and effective chairmanship of the Board through challenging and exciting times."

Our next Chairman, Dr Jonathan Berry, first joined the MDDUS Board in 2007 and most recently served as Vice-Chairman and also Chairman of the Investment Committee. Jonathan is a retired GP partner and former Chairman of Trafford South PCG, among other leadership roles in primary care. He was recently appointed as a non-executive director to North West Boroughs Healthcare NHS Foundation Trust.