PRESSURES in the NHS always increase at this time of year – and so inevitably does the risk of burnout amongst doctors. Long hours and a hard-working culture might seem "all part of the job" but not at the expense of patient safety and personal health. 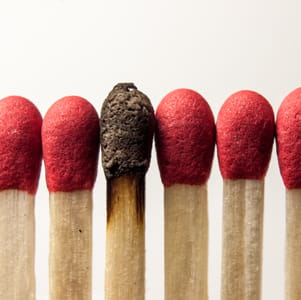 PRESSURES in the NHS always increase at this time of year – and so inevitably does the risk of burnout amongst doctors.

Burnout occurs when an individual feels overwhelmed, emotionally drained, and unable to meet constant demands. It reduces productivity and saps energy, leaving sufferers feeling increasingly unmotivated, helpless, hopeless, cynical and resentful. Eventually, it may seem like they have nothing more to give and every day seems a bad day.

Have you ever thought that you may be at risk of burnout?

We are all very aware of the pressures that are weighing down on the NHS at present. Whether doctors work in a hospital or in general practice, the stress of increased demands on their time and goodwill can impact on health and working standards, leading to a higher frequency of situations in which patient safety may be put at risk.

A recent report by the BMA highlights how long and demanding hours, in addition to frequent changes in rotas and insufficient recovery periods, have put thousands of hospital doctors at heightened risk of sleep deprivation and fatigue.

Many GPs are also feeling the strain of increased winter pressures and are self-referring to GP help services suffering from stress or burnout because of the struggle to cope in practices with long-term absences and vacancies. We have had calls from members at the end of their tether, who feel that despite doing their best in a difficult situation they are getting no-where. One short-staffed GP practice changed all their appointments to emergency on-the-day-only to try to address the increased demand – but this only caused more stress because of the subsequent influx of patient complaints.

A hospital consultant also contacted us recently to query his indemnity cover after having been asked to take on responsibilities for outlier patients from general medicine – an area in which he had not had experience for years and felt was outside his competence. Such scenarios might seem fairly insignificant in themselves but added together create a massive impact on the mental health of doctors and their teams.

The BMA’s second quarterly survey published in June last year found that 74 per cent of GPs as well as 70 per cent of junior doctors and 65 per cent of consultants reported working beyond their regular hours ‘often’ or ‘very often’. These figures will have increased over the last couple of months, no doubt compromising work/life balance even further.

The GMC has issued advice for doctors dealing with the current high-demand across the health service. In a recent statement, GMC chief executive Charlie Massey said: “it is a doctor’s duty to put their patients first but they mustn’t discount their own health and well-being”.

Another consideration is what a doctor should do if concerned that they may pose an acute risk to patients through exhaustion or stress. Charlie Massey said: “If a doctor believes their work environment is unsafe or that they are unable to maintain standards of care we urge them to flag their concerns. We expect those responsible for running the services to listen, consider and act on those concerns.”

This statement echoes GMC guidance on Raising and acting on concerns about patient safety.

It’s understandable that many doctors might feel that the long hours and hard-working culture are part and parcel of the job and that to flag up concerns either about themselves or another doctor would be letting everyone down. But would you want to take the chance of harm befalling a patient if it could have been prevented? Doctors have a duty to put patients’ interests first and act to protect them, which overrides personal and professional loyalties.

People in the throes of serious burnout are no longer able to function effectively on a personal or professional level. But this does not happen suddenly – burnout creeps up over time and there are warning signs that can be recognised to stop it escalating.

Burnout can be overcome once it is recognised and attended to – although it certainly requires lifestyle changes. Not all contributing factors are outside your control and there is plenty of advice and guidance about how to help overcome burnout and feel healthy and positive again.

Talk to other people and look at options to improve your work/life balance. Try to take a break from work – use up annual leave or take unpaid absence. Get plenty of sleep when not at work and support your mood and energy levels by eating a healthy diet, restricting alcohol intake and making exercise a priority, even if just a 30-minute walk.

The GMC advises doctors to seek professional help if necessary. Make sure you are registered with a GP and trust them to give you confidential advice. The GMC provides a list of resources to help doctors with health concerns.

Lindsey Falconer is a risk adviser at MDDUS