...In response to the complaint Dr A states that dental damage is a known complication of anaesthesia and this is explained to all patients... 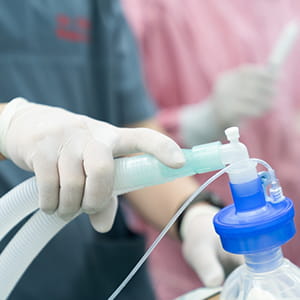 BACKGROUND: Mr K undergoes surgery requiring general anaesthetic. The procedure is carried out without incident and he is soon discharged home.

As his pain relief wears off, Mr K feels discomfort in his two upper front teeth and throat, and notices some small cuts at the back of his throat.

He contacts the hospital to explain the issues he is experiencing and asks for them to be noted on his file. While he is not making a formal complaint at this time, he explains he has made an appointment with his dentist and may eventually take the matter further should any remedial dental work be required.

The hospital confirms that a note will be added to his file, and Mr K is given the contact information for the complaints manager.

One week later, Mr K calls the hospital complaints manager following his dental appointment. He explains his sore throat has healed and the pain in his front right tooth has gone, but he is still experiencing pain in his front left tooth.

He says his dentist explained to him that pain in an otherwise healthy tooth is likely to have been caused by some type of knock. The dentist advised that the tooth may heal on its own, but if the root does not recover then the tooth may die. Because of this, Mr K asks to make a formal complaint. The complaints manager sends him a form by post and explains the complaints process.

Mr K’s formal complaint is received by the hospital ten days later. In it, he questions whether something “went wrong” when he was being administered the general anaesthetic, which could have caused the tooth pain. The complaints manager requests a statement from the anaesthetist involved in the patient’s surgery, Dr A. She drafts a response and contacts MDDUS for advice.

He suggests to Dr A that she may wish to include an apology, where appropriate, in her response, reminding her that this is not an admission of fault, but rather it demonstrates she is an insightful practitioner reflecting on an expression of dissatisfaction.

Should the complaint be escalated, a thorough and conciliatory approach may act in her favour.

When writing an apology, she may wish to say that she is sorry for the pain and distress the patient has suffered following the surgery.

She may also wish to provide reassurance that she has taken the complaint seriously and explain how she has reviewed the case. For example, whether she referred to the contemporaneous medical records, her own recollection of events, discussions with other colleagues and/or any review of local or national guidelines or policies.

In her response, Dr A states that dental damage is a known complication of anaesthesia and that this is explained to all patients. The MLA suggests further explaining how dental damage is a known complication of anaesthesia, for example by indicating how this occurs, the frequency, the usual outcome and treatment. It would also be helpful for Dr A to refer to any national guidelines that she would follow to protect teeth when anaesthetising a patient, and whether she did so in this case. If Dr A discussed and documented this pre-operatively within her consent process with Mr K, she could include details of this in her response.

The MLA suggests that if Dr A could reassure the patient that his teeth were not injured during the surgery she should do so.

The adviser also suggests finishing the response by reiterating her apology, and perhaps also offering a meeting with the patient if he would find that helpful.

...Dr A is advised that she should not let Mr G coerce her into prescribing medication that she does not believe is appropriate or serves his needs...