...The dentist states that had there been any lip trauma or acid etch gel touching the tissues he would have advised Mr G immediately and recorded this in the clinical notes... 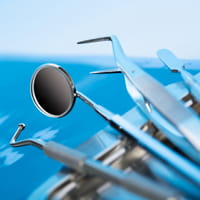 BACKGROUND: Mr G attends his dentist – Dr K – for a routine check-up and scale/polish. The dentist notes that a distal surface filling on LL3 needs to be replaced. An appointment is booked.

A week later Mr G attends the surgery for the appointment. A local anaesthetic is given and the procedure is undertaken, with no indication in the clinical records of any complications.

Three days later Mr G returns to the surgery complaining of an ulcerated area on the lower lip opposite LL3. He has already consulted his GP who has prescribed an antibiotic. Dr K explains that the ulcer is probably due to teeth rubbing against the lip, or trauma from eating while anaesthetised. Mr G is advised to clean the ulcer with warm salt water. He is asked to re-attend the surgery in a few days for review.

Two weeks later Mr G returns to the surgery and the ulcer has healed. He informs Dr K that he obtained an opinion for another dentist who advised that the ulcer had been caused by the lip being pushed over the incisal edges of the lower teeth and spillage of acid etch gel onto his lip.

Dr K explains that the procedure was undertaken in usual way with by placing cotton wool rolls in the sulcus to isolate the tooth, followed by aspiration of the acid gel. The dentist states that had there been any lip trauma or acid etch touching the tissues he would have advised Mr G immediately and recorded this in the clinical notes.

Dr K apologises for the discomfort and inconvenience Mr G has experienced and agrees to reimburse him for the cost of the treatment as a gesture of goodwill.

A letter is later received by the practice from solicitors acting for Mr G, claiming damages for clinical negligence in his dental treatment. The letter alleges that Dr K failed to take due care in providing treatment of LL3 by allowing contact of excessive acid etch gel with broken tissue. The letter also states that the cotton wool was inadequately moistened and caused further damage to the lip tissue when being “torn away".

Mr G alleges that as a result of this breach of duty of care he required an antibiotic to combat infection and continues to suffer discomfort, in addition to anxiety over future dental treatment.

ANALYSIS/OUTCOME: MDDUS acting on behalf of Dr K instructs an expert dental surgeon to assess the claim. The expert observes that the clinical notes give no indication of soft tissue trauma during the procedure. In his statement on the allegation Dr K sets out his usual procedure in such cases, including use of cotton wool to isolate the tooth and protect soft tissue from damage.

The expert also notes that when Mr G returned to the surgery with the ulcer, Dr K explained the likely cause to be trauma from the teeth when the lip was numb. The dentist provided advice on management of the ulcer and arranged to review the patient in a few days, which was a reasonable period to assess healing.

The expert concludes that in her opinion the most likely cause of the ulceration was accidental trauma caused by biting or rubbing from the teeth while the lip was numb with local anaesthetic. Trauma caused by pulling the cotton wool away from the tissue was unlikely as the roll would have been moistened by Mr G’s saliva and the solution used to rinse away the acid etch.

A letter denying the claim is sent by MDDUS on behalf of Dr K and the case is subsequently discontinued.