...Mrs U is informed there are no free slots at the next minor surgery clinic and is advised to call in a week , as the practice does not operate a waiting list system... 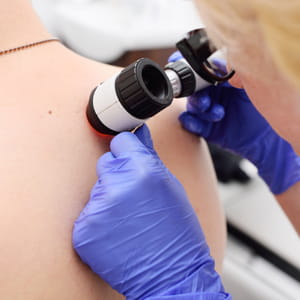 BACKGROUND: Mrs U attends her GP – Dr L – with a mole on her back that her husband had noticed was changing in shape and colour. Dr L diagnoses a pigmented papilloma and advises Mrs U to make an appointment to have it removed at the practice’s minor surgery clinic.

A receptionist informs Mrs U that there are no free slots at the next clinic and she is advised to call in a week to see when a slot would be available, as the practice does not operate a waiting list system. Over the next two months Mrs U phones the clinic numerous times but there are never any available appointments.

In the meantime Mrs U notices that the lesion appears to be changing more rapidly in colour and shape and starting to protrude. She makes another appointment with Dr L for two weeks later. In the next consultation, the GP notes changes in the lesion and makes an urgent referral to a dermatology clinic where it is excised a week later. The histology report confirms an invasive malignant melanoma.

Fine needle aspiration of a lymph node in the left axilla determines that the cancer has spread. Mrs U is admitted to hospital for block dissection of the lymph node as well as a re-excision of the scar where further melanoma deposits are found. Over the next months there is rapid metastatic spread to the lungs, liver and bone. Mrs U dies at home within 10 months of first seeing the GP.

Mr U instructs solicitors to bring a claim of medical negligence for misdiagnosis and failure to refer. It is alleged that had Mrs U been referred at the initial consultation there would have been no subsequent lymph node involvement and spread of the melanoma.

ANALYSIS/OUTCOME: MDDUS, acting on behalf of the GP, commissions reports from both a primary care expert and a dermatologist. The primary care expert opines that, considering the location and changing nature of the lesion, Dr L should have made an immediate referral. He is also critical of the booking arrangements for the minor surgery clinic. Given these facts, the expert concludes there was a breach of duty of care to the patient.

The expert dermatologist commenting on causation (consequences of the breach) having reviewed the full case file concludes that the delay would have made no difference to the overall outcome of the disease in either cure or prolonged survival – given it was an extremely aggressive melanoma.

A letter of response is sent to the complainant denying liability. Whilst there was a breach of duty, this did not have a causative effect on the outcome and therefore liability is not proven. The case is subsequently discontinued without explanation.