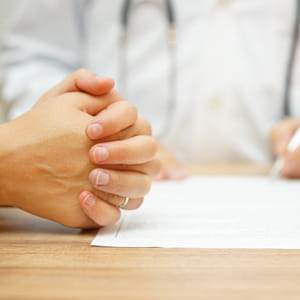 BACKGROUND: Ms J attends a hospital clinic for regular monitoring of a chronic condition. For her most recent visit she is seen by a consultant, Dr P, with specialty trainee Dr B observing. Ms J asks to go over details of her medical history before talking about her current issues. She recounts the various tests and procedures she has undergone in the past few years, and Dr P occasionally stops her to ask for more specific details.

The consultant then asks to examine Ms J’s legs to check for any vascular problems, but the patient refuses, saying she would be uncomfortable removing her trousers in front of a male doctor. Dr P explains that an examination would be very helpful in creating an effective treatment plan, but Ms J again refuses.

The patient then begins to detail previous instances where she believes the care provided by Dr P and his team has not been of a high standard. The consultant offers to schedule a follow-up appointment but Ms J becomes increasingly agitated and leaves the clinic.

One week later, a written complaint is received by the hospital from Ms J making allegations of sub-standard care. It accuses Dr P of being abusive, insulting, ill-tempered and unprofessional. Dr B is specifically criticised for failing to intervene during the consultation to "challenge or correct" Dr P.

The hospital launches an investigation into the complaint and asks both doctors to write a statement about what happened during the consultation.

ANALYSIS/OUTCOME: Dr B contacts MDDUS for help in drafting the statement. She explains to a medical adviser that she witnessed no unprofessional behaviour from the consultant during his appointment with Ms J and disagrees with the patient’s assertion that he spoke to her in an angry or abusive way. Dr P remained calm and only interrupted Ms J to ask for more specific details, as the description of her medical history had been difficult to follow.

The MDDUS adviser offers Dr B some guidance on drafting the statement. He suggests checking to see whether the hospital provides a proforma/template for such statements. If not, Dr B should begin the statement by stating:

She should also include a paragraph explaining the source of the information she is providing, e.g. her recollection of events, discussion with colleagues, review of contemporaneous notes. It is important that a clear distinction is made in the statement as to whether a matter referred to is a direct recollection or not.

Any statement should also stick to the facts of what occurred and Dr B should not be drawn into any emotional aspects of the dispute. Ensure the statement is accurate and clearly indicate any elements you are unsure of (e.g. “I believe that X said something along the lines of…”, “to the best of my recollection I recall that X said…”)

The General Medical Council also provides guidance in Good medical practice, reminding doctors to cooperate with formal investigations. Doctors should be honest and trustworthy when writing reports and take reasonable steps to ensure the information provided is correct and within their scope of competence and involvement in the case. The GMC also reminds doctors of their duty to raise concerns even where it may cause concern for a colleague.

A statement of fact

...Dr C asks MDDUS how to go about writing a statement for a significant clinical incident investigation...