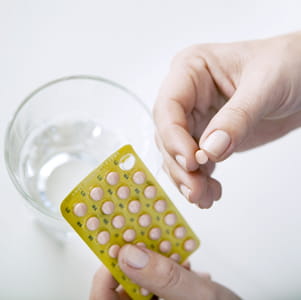 BACKGROUND: Mrs A is 52 years old and attends the surgery for a routine HRT check. She is seen by a GP registrar – Dr K. The patient has had menopausal symptoms for the last four years and has been taking Prempak C and wishes to continue with this medication. Dr K discusses the risks/benefits of continuing HRT and an informed decision is made to reduce the dose and monitor. Dr K enters the prescription into the system and Mrs A is provided with a script.

Mrs A returns to the surgery six months later complaining of PMB (post-menopausal bleeding) and is seen by another GP – Dr S. Examination reveals no abnormalities and the patient is referred to the local gynaecology clinic for assessment. An ultrasound reveals a thin and regular endometrium, and the patient is advised to return to her GP if the bleeding continues.

Another six months go by and Mrs A is seen again by a different GP at the practice – Dr N. The patient is still experiencing PMB and a subsequent transvaginal scan shows a thickened endometrium. A biopsy is taken but the sample proves inadequate so a hysteroscopy is arranged. This reveals a normal-sized uterus with no polyps or fibroids but the histopathology report notes a proliferative polypoid endometrium consistent with ongoing oestrogenic stimulation, though with no evidence of endometriosis, hyperplasia or malignancy.

The reviewing consultant gynaecologist suspects that this is indicative of the patient taking oestrogen-only HRT and on further investigation it is revealed that Mrs A has been mistakenly prescribed the unopposed oestrogen HRT Premarin rather than the combined oestrogen and progesterone medication Prempak C. Mrs A is advised by the practice to discontinue taking the Premarin and she opts to come off HRT entirely.

The consultant gynaecologist writes to both the practice and Mrs A about the long-term effects of unopposed oestrogen HRT with an intact uterus and advises that the risk of serious complications from the prescribing error is low but suggests an annual ultrasound scan to ensure that the womb lining remains stable.

The practice later receives a letter from solicitors on behalf of Mrs A intimating a negligence claim. It is alleged that, due to the prescribing error made by the GP registrar and the subsequent failure by the practice to detect the mistake, the patient has had to endure unnecessary invasive procedures and unpleasant symptoms including bleeding, hair loss, lack of sleep, abdominal and back pains. There is also concern over the ongoing risk of complications.

ANALYSIS/OUTCOME: MDDUS undertakes representation of the GP partners in the practice; the GP registrar is indemnified by the NHS. A lawyer reviews all the relevant documents including the patient notes and a practice SEA (significant event analysis). The prescribing error is attributed to inexperience on the part of the registrar – but also in part due to the two medications being similar in name and appearing together on a drop-down menu in the practice system.

The SEA concludes that all future HRT prescribing should be double-checked to establish whether the patient has an intact uterus – and a further checklist should be implemented at each HRT review.

A GP expert report is deemed unnecessary in the case as prescribing unopposed oestrogen in these circumstances (and the failure to correct the error in review consultations) is clearly indefensible. A medico-legal expert in gynaecology is consulted regarding the consequences of this incident. She states that it is clear the prescribing error would have led to a thickened endometrium and bleeding but this would not necessarily have required hysteroscopy/biopsy under general anaesthesia. This was primarily a result of inadequate sampling in the first referral.

In regard to ongoing risks the expert states that in her opinion there is no significant risk remaining now that the oestrogen-only HRT has been stopped. She also does not believe that the symptoms described by the patient can be solely attributable to the prescribing error as Mrs A had been complaining of menopausal symptoms for years before her consultation with Dr K.

MDDUS does, however, deem the case too risky to contest in Court and decides to settle for a small sum in agreement with the members, along with a contribution from NHS indemnity in respect of Dr K’s involvement.