...In an attempt to restrain the boy Dr D grabs him by the shoulders. A week later he is visited by police at his flat and cautioned and charged with common assault... 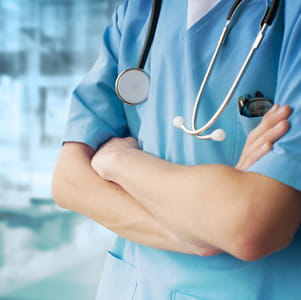 BACKGROUND: A specialist trainee in emergency medicine – Dr D – is working a Friday evening shift in a busy inner city hospital. A 15-year-old boy attends reception with his mother, having fallen in the street. He is bleeding from a cut above his eye and is clearly inebriated, swearing at the charge nurse.

The patient is taken through to the treatment area but refuses to be examined and becomes aggressive. In an attempt to restrain the boy Dr D grabs him by the shoulders. His mother intervenes and the boy calms down such that he can be treated.

A week later Dr D is visited by police at his flat and cautioned and charged with common assault against the boy.

Dr D phones MDDUS and is advised to inform his employing trust and the GMC. A Rule 4 letter later arrives from the GMC stating that his case will be investigated to determine if further action might be necessary with regard to his fitness to practise.

ANALYSIS/OUTCOME: MDDUS works with Dr D in composing a response to the GMC letter, explaining the circumstances behind the assault charge. He describes how the patient became increasingly loud and disruptive, such that other patients were becoming alarmed, and his only intention was to calm the boy down. Other witnesses, including nursing staff, support this version of events.

The GMC contacts the trust, which confirms that it has carried out a risk assessment and ensured that Dr D is chaperoned while the charges are pending. The GMC investigator also contacts the doctor’s responsible officer (RO) who states that having spoken with witnesses he believes Dr D has done nothing wrong. The RO also reports that Dr D has undertaken reflective practice involving how he should behave in future with such patients.

Dr D is given a date for a court appearance but is later informed by the prosecutor that no further action will be taken against him and the matter is closed. This is communicated to the GMC who later responds that its case examiners have considered the information provided and decided to conclude the case with no further action. The trust also drops the matter and lifts all conditions on Dr D’s practise.