...The receptionist phones Mr P to let him know that the prescription will be sent to his local chemist for collection. That next morning a neighbour checks on Mr P and finds him dead... 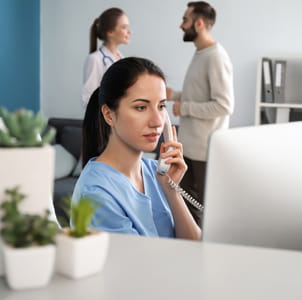 BACKGROUND: Mr P is 52 years old and works as a dispatcher for a delivery firm. He suffers from morbid obesity and is divorced and living alone. He attends the GP surgery complaining of ulcers and cellulitis in his lower left leg and is referred to the nurse for dressings. Over the next few weeks he re-attends for further dressings and review.

A month later Mr P phones the practice to say he cannot attend a scheduled appointment with the practice nurse, stating he finds it difficult to walk, having pain in his left leg which he thinks could be a pulled muscle. A prescription is issued so that he can dress his ulcers at home.

Ten days later Mr P phones the practice and speaks to a receptionist, complaining of breathing problems and requesting a home visit. The receptionist asks if he can come in, as the GPs are very busy. Mr P replies that no one is available to drive him and he has no cash for a taxi. He tells the receptionist that it’s probably a respiratory infection and requests antibiotics. The receptionist agrees to pass the request to one of the doctors. She contacts the locum GP on duty – Dr Y – and informs him that Mr P did not sound breathless on the telephone and was able to speak in complete sentences. Dr Y decides that a home visit is not necessary and issues a prescription for amoxicillin 500mg. The receptionist phones Mr P to let him know that the prescription will be sent to his local chemist for collection.

That next morning a neighbour checks on Mr P and finds him dead. The cause is later determined to be deep venous thrombosis (DVT) and pulmonary embolism (PE).

A letter of claim on behalf of Mr P’s two children is sent to Dr Y alleging clinical negligence. The letter states that Mr P had been suffering from leg and calf pain and, on the insistence of his ex-wife, phoned the practice, reporting breathlessness and chest pain and requesting a home visit. It is alleged that Dr Y failed to speak directly to the patient in order to obtain a detailed history and assessment of his condition. It is also alleged that the GP should not have prescribed antibiotics without consulting first with the patient. It is claimed that had Mr P been adequately assessed he would have been admitted to hospital as an emergency and administered the anticoagulant heparin, thus preventing his death.

ANALYSIS/OUTCOME: A GP expert is instructed by MDDUS to review the case. She takes the view that Dr Y did not provide an acceptable standard of care and at the very least should have spoken to Mr P directly to ascertain why he had requested a home visit. Further, the GP prescribed antibiotics without making any assessment of the patient.

MDDUS also requests an expert opinion from a vascular surgeon on the consequences of the alleged breach of duty (causation). The expert opines that had Mr P been referred to hospital he would likely have been diagnosed with DVT/PE and treated urgently with heparin. This would have prevented further thrombosis forming in the leg veins and dramatically reduced the risk of PE.

A letter of response is sent by MDDUS on behalf of Dr Y admitting breach of duty, in that the GP should have arranged to speak to Mr P on the telephone in order to assess his condition, and that he should not have issued a prescription for antibiotics without first seeing or speaking to the patient.

However, based on the symptoms described by Mr P to the practice receptionist as recorded in the notes (i.e. breathing problems and flu-like symptoms but no mention of chest pain or leg pain in this context), it is averred that even if Dr Y had arranged a telephone assessment it would have been unreasonable to suspect DVT/PE. Respiratory infection would not usually be an emergency situation with need to be assessed by a doctor within 24 hours (either at home or in the practice) and thus the expected course of action would not have prevented his death. Causation is accordingly denied.

Even with the potential causation defence, MDDUS judges that the case would be risky to argue in court and a settlement is agreed with the member’s approval.