...The claim alleges that the practice failed to act on the results of an abnormal blood test resulting in delayed diagnosis of the patient’s temporal arteritis and permanent visual loss in the left eye.... 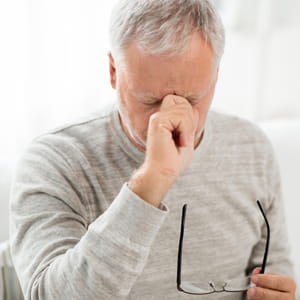 BACKGROUND: Mr T is a 68-year-old retired lawyer who attends his GP practice complaining of headaches over the past week. Dr A takes a history and examines the patient, noting tenderness around both jaws. He records: “Tension headache? No temporal tenderness or visual upset; TA [temporal arteritis] unlikely”. Given the slight risk of TA he orders blood tests, including a FBC and plasma viscosity (PV). Mr T is advised to take paracetamol and to contact the surgery if the pain does not ease or he experiences any new symptoms.

A week later Mr T attends the surgery for an emergency appointment. He reports loss of visual acuity in his left eye over the last 24 hours. He is seen by the duty GP – Dr W – as Dr A has been away on annual leave for the past week. Mr T says he is still suffering from headache and feels pain in his jaw on chewing. Dr W also notes tenderness in the left temporal artery and diagnoses temporal arteritis. An urgent referral is made to the local hospital eye clinic and the patient is prescribed prednisolone stat.

A consultant at the eye clinic examines Mr T and finds visual loss in the left eye and impaired pupil light reaction, indicating significant damage to the optic nerve. She diagnoses giant cell arteritis with ischaemic optic neuropathy. Mr T is prescribed high-dose intravenous methyl prednisolone followed by a tapering course of oral prednisolone. The consultant also notes that plasma viscosity was significantly elevated in the blood test undertaken by Dr A (on Day 1). A C-reactive protein (CRP) test was also markedly elevated.

Eight days later Mr T attends an out-patient clinic and visual acuity in the right eye is measured at 6/9, but there is no perception of light in the left eye. The prognosis is considered poor.

A claim for clinical negligence is received by the practice from solicitors acting on behalf of Mr T. It alleges that the practice failed to act on the results of an abnormal blood test and this resulted in delayed diagnosis and treatment of the patient’s temporal arteritis, with complete and permanent visual loss in the left eye. It is further alleged that Dr A failed to examine the patient’s fundi and check his blood pressure.

ANALYSIS/OUTCOME: MDDUS instructs a primary care expert to review the patient records and other documents, including a significant event analysis (SEA) conducted by the practice. The expert concludes that there was a systems error in processing the abnormal blood test result, which amounted to a breach of duty of care.

The expert notes that Dr A ordered the blood tests but then went immediately on annual leave. Practice protocol would normally call for the results to be sent to the duty doctor, but instead admin staff sent these to the practice nurse. The FBC was forwarded to the duty doctor with a note to say the PV was abnormal (but not the actual result). The duty doctor checked the FBC result but failed to notice the comment relating to the PV. She then sent the FBC report on to Dr A, not realising he was on leave. It was not until the patient attended the eye clinic that the elevated PV was noted and acted upon – a delay of over seven days.

In regard to Dr A’s failure to examine the patient’s fundi, the expert points out that the crucial elements in making a diagnosis of TA are the history and examination of the temporal arteries, along with blood tests. Examination of the back of the eyes would not normally be indicated.

An opinion on causation (consequences of the breach of duty) is also solicited from a consultant ophthalmic surgeon. He concludes that had Mr T’s elevated PV been acted upon in a timely manner it would have lead to a diagnosis of giant cell arteritis and prompt treatment with steroid medications such that the patient would not have lost vision in his left eye. He also concludes there is no reasonable prospect of any visual improvement.

MDDUS agrees to settle the case with approval from the GP partners, but with no admission of liability on the part of Dr A. The practice acts on the SEA and makes changes in the results-handling process to prevent any repeat of the systems error.