...seeing omental tissue evident one week after surgery would be consistent with observations (by the surgeon) of a “large area of deep breakdown” within the wound... 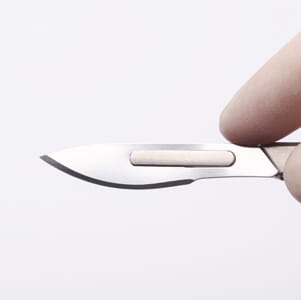 BACKGROUND: Mrs W is 46 years old and obese. She attends her GP surgery for a follow-up review having undergone a hysterectomy through a previous caesarean section scar. A practice nurse notes a small amount of clear serous fluid leaking from the wound. Dr K examines the patient and confirms a one-inch superficial wound dehiscence along one end but no sign of infection. She notes in the records that a small amount of “omental tissue” protrudes through the edge of the wound. The GP pushes the tissue back into the wound and repairs the dehiscence with silk sutures.

Two days later the patient is seen again by the practice nurse who notes the wound is still leaking serous fluid near the edge. Again, there is no inflammation or sign of infection. Dr K examines the wound and recommends removing the sutures and allowing it to heal by second intention. Mrs W is concerned “something is poking out of the hole” but the GP finds nothing, even with the patient standing. The practice nurse cleans the wound and redresses with gauze.

Over the next couple of months the wound heals over but the patient notes a swelling on the right side just above the suture line. The practice nurse examines the lump and requests that Mrs W make an appointment to see Dr K for further assessment but the patient neglects to do so.

Two months later Mrs W returns to the practice with a persistent tender swelling above the healed suture line. Dr K makes a diagnosis of incisional hernia at the site of the hysterectomy and she refers the patient to hospital. One month later Mrs W undergoes an attempted laparoscopic repair which has to be converted to an open procedure. She is found to have a large complex sac of omental tissue and small bowel adherent inside. Her recovery from the surgery is long but otherwise unremarkable.

A letter of claim is received by Dr K alleging breach of duty of care in her decision to re-suture the wound in the presence of dehiscence and protruding omental tissue. It is alleged that Mrs W should have been referred immediately back to hospital for surgical correction of the underlying defect in the rectus sheath. This would have prevented the incisional hernia and subsequent need for more extensive surgical treatment.

ANALYSIS/OUTCOME: MDDUS reviews the patient notes and statements by both Dr K and the practice nurse. The GP claims that on first examining the patient she noted a small amount of fatty tissue protruding through the wound and that this was pushed back through before placing the sutures. She claims that the reference in the notes to “omental” tissue was made in error and that she had intended to write “adipose”.

A primary care expert reviews all the documentation and offers an opinion on the case. He observes that simple wound dehiscence is not unusual and suturing can be effective, but healing by secondary intention is more common in primary care. The claimant’s contention of separation of deep layers of the wound (rectus muscle and sheath) evident early on is based on mention in the notes of protruding “omental” tissue. Should a court accept Dr K’s contention that this term was used in error then nothing else in the GPs examination would have suggested an incisional hernia at that stage and the need for referral back to hospital.

Another expert report from a surgical consultant is commissioned in regard to causation (the consequences of any breach in duty of care). He comments that it would be unusual to see omentum in this (Pfannenstiel) type of wound. However, seeing omental tissue evident one week after surgery would be consistent with observations (by the surgeon) of a “large area of deep breakdown” within the wound. Had Mrs W been immediately readmitted to hospital the surgeon would have likely reopened the Pfannenstiel wound and re-sutured the full length to ensure against any other areas of dehiscence. This would have avoided development of an incisional hernia but still necessitated an operation under general anaesthesia.

In view of the legal vulnerabilities in the case over the disputed notes and the contingent causation, MDDUS decides to settle the case in agreement with the member.