...BPE scores should have been recorded at every patient review and the expert doubts the accuracy of the first BPE, given the patient’s bleeding gums and subsequent scores... 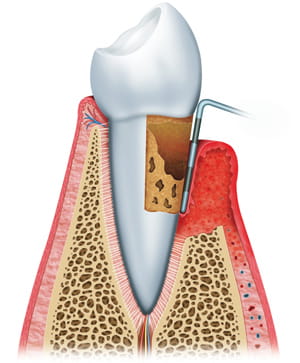 BACKGROUND: A 42-year-old long-term smoker – Mr K – has been a patient at his dental surgery for two years and attends Dr J for a regular check-up and scale and polish. He complains of ongoing bleeding gums on brushing and Dr J undertakes an oral examination. This includes a BPE scored at 000/020. The dentist notes that Mr K is at moderate risk of periodontal disease and advises him on good oral hygiene and the need to quit smoking.

A year later Mr K attends the surgery for another check-up and complains again of intermittent bleeding gums. Dr J notes a cavity in a rear lower molar and also general periodontal infection and pocketing. His BPE is recorded as 342/221 and he is prescribed antibiotics and a medicated mouthwash. Mr K also sees the hygienist who notes that his gums are sore and inflamed, and there is bone loss in all quadrants. The patient is asked to return for a radiograph but fails to attend. No other details are recorded in the notes.

The patient returns to see Dr J ten months later for an examination along with a scale and polish from the hygienist. It is noted that his oral hygiene is much improved.

Around 18 months later Mr K moves house and registers at a new surgery. He attends Dr S complaining of bleeding gums and the dentist records BPE scores of 332/323. Dr S discusses the implications of periodontal disease and refers Mr K to a hygienist. She finds his gingival health is very poor and undertakes root surface debridement of deep pockets. Mr K claims he was not told of the full implications of periodontal disease. Advice is provided on proper oral hygiene and he is offered a referral for smoking cessation.

A year on Dr S reports that despite serious efforts by Mr K to improve oral hygiene and having quit smoking, there is still active disease, especially in the anterior teeth. The patient is referred for specialist periodontal care.

A letter of claim is sent to Dr J alleging clinical negligence in failing to diagnose and treat Mr K’s periodontal disease. It states that appropriate BPE assessments were not undertaken at all appointments, despite the patient being at risk. There was also failure to act on BPE scores indicating the need for subgingival scaling, and no radiographs were taken to monitor the condition. It is also alleged that Mr K should have been offered smoking cessation advice and referred to a periodontist.

A periodontal specialist instructed by the patient notes a significant risk he could lose a number of teeth in the medium to long term.

ANALYSIS/OUTCOME: MDDUS instructs an expert dental surgeon who takes the view that the patient has not received a reasonable standard of care from Dr J. This opinion is based partly on the poor quality of the notes, which offer few details of the presenting complaint and history, no special investigations and findings, and no stated diagnosis or prognosis with discussion of treatment options. There is also no mention of radiographs being taken apart from the recall which the patient failed to attend. There is also no record of smoking cessation advice given beyond Mr K being told to quit.

The expert opines that BPE scores should have been recorded at every patient review and he doubts the accuracy of the first BPE, given the patient’s bleeding gums and subsequent scores. Only one bitewing radiograph (undated) was in the records, with no record of relevant findings. The expert finds this insufficient.

In his response to the claim Dr J said he did not refer Mr K to a periodontal specialist because the BPE scores did not warrant it – but the expert believes that referral should have been discussed (and recorded) to ensure shared decision making. The expert opines that BPE scores of 3 and over should have prompted an analysis of plaque and bleeding distribution, along with 6-point pocket charting of the affected sextants after initial periodontal therapy. The patient should then have been provided with intense oral hygiene instruction and treatment arranged for debridement of the affected root/tooth surfaces.

A separate opinion is sought for causation (consequences of the breach of duty of care). A periodontal specialist examines Mr K and says that with good treatment and compliance there is a reasonable chance he will retain all his teeth in the medium term – but that with earlier appropriate treatment the patient’s periodontal condition would not have been as severe.

Given the unsupportive opinions, MDDUS settles the case with Dr J’s agreement.