...Mr B apologises for losing his temper but Dr T is not satisfied and decides to remove him from the practice patient list... 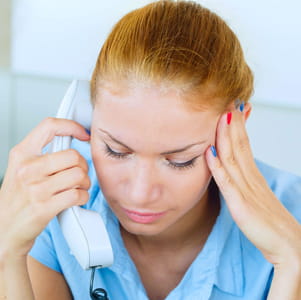 BACKGROUND: Mr B contacts his family medical practice asking to make an appointment for his wife that Friday, as her employer does not allow staff to make personal calls. He is told by the receptionist that the practice offer only “book-on-the -day” appointments and that Mrs B should phone back at 8.30am on Friday. Mr B explains that his wife will already be at work by then and asks why he can’t simply arrange an appointment.

The conversation becomes heated and the receptionist passes the call to the PM who offers an appointment on the Monday. Mr B shouts that this is too late and the PM eventually terminates the call due to his aggressive tone. The next day the practice receives a letter from Mrs B complaining about her difficulty in booking an appointment and also about “unhelpful practice staff”. One of the GPs – Dr T – responds by calling Mrs B and offering to see her Friday afternoon.

Later the PM phones Mr B who apologises for losing his temper but Dr T is not satisfied and decides to remove him from the practice patient list. She informs him of her decision by letter, stating that his behaviour was unacceptable and that he should look for another practice. She adds that his request for an appointment was not in line with policy, details of which could be found on the practice noticeboard.

The next day Dr T receives a formal letter of complaint from Mr B. He objects to being abruptly removed from the practice list and asks to be reinstated. His understanding was that practice policy allowed patients to book up to two days in advance and he was unaware of any posters stating otherwise. While he apologises for losing his temper, he accuses the practice staff of being obstructive and condescending and asks for a review of practice policy to make appointments easier to access.

ANALYSIS/OUTCOME: Dr T contacts an MDDUS adviser for guidance on how to respond. She is advised to address each individual point raised and, where appropriate, offer an apology and an explanation of the circumstances that led to the complaints.

In regard to the decision to deregister Mr B, the adviser warns that the matter could be referred to the ombudsman or the GMC, and Dr T must be prepared to fully justify her decision. She is advised to review guidance from both the GMC and RCGP on ending your professional relationship with a patient. The GMC states that before ending a relationship, the doctor should warn the patient and do what they can to restore it.

Dr T accepts that she has not given Mr B due warning. She agrees to reinstate him to the practice list and offers to meet to discuss his complaints.