...The dentist noted that a large amount of tooth tissue had been removed in the preparation of UR2 – more akin to crown provision... 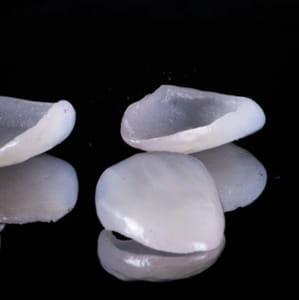 BACKGROUND: Mr F attends his dental surgery unhappy with the appearance of his upper front teeth which are misaligned and stained. He asks the dentist – Dr G – about having them crowned but is advised against this as the teeth appear healthy. An orthodontic referral is suggested but Mr F is not keen on protracted and expensive treatment.

He asks about veneers and Dr G explains that these will improve aesthetics but not realign the teeth. Mr F however requests a treatment plan and costs for placement of veneers at UR2, UR1 and UL1.

Two months later the teeth are prepared and temporaries are placed. Permanent veneers are cemented a week later. Flossed contacts and occlusion are checked and Mr F is happy with the appearance.

Mr F returns to the practice two weeks later complaining of sensitivity in the upper teeth and pain on biting. He also feels the veneers catching on the lower teeth. Dr G adjusts the bite and suggests a nightguard would help with possible teeth grinding.

The dentist arranges for follow-up in a week. At this appointment Mr F reports that the sensitivity has eased a little. Dr G advises waiting to see if the sensitivity will settle before considering other options such as root canal treatment.

One month later Mr F is back at the surgery complaining of increased sensitivity in UR1 and UL1 to heat/cold and percussion. The upper gum is also tender to touch. Appropriate radiographs show no pathology apically in the teeth. However based on the clinical findings a diagnosis of irreversible pulpitis is made and Dr G discusses possible root canal treatment (RCT) as the symptoms are not improving. An appointment is made but this is later cancelled and one month later the practice receives a letter of claim for damages, alleging clinical negligence against Dr G.

It transpires that Mr F has attended another dentist – Dr B – after debonding of the veneer at UR2. Dr B noted that a large amount of tooth tissue had been removed in the preparation of UR2 – more akin to crown provision. The dentist also diagnosed irreversible pulpitis in that tooth and in UR1 and UL1 and discussed treatment options. Subsequent debonding of the veneer at UR1 prior to RCT also revealed significant tissue loss.

ANALYSIS/OUTCOME: MDDUS in assisting Dr G commissions an expert report on the case from a primary dental care practitioner. Examining radiographs and clinical photographs taken by Dr B, the expert notes significant loss of tooth tissue in UR2 suggesting over preparation – i.e. too much tooth substance removed so that dentine is exposed or removed. This has undoubtedly lead to sensitivity which might have resolved once the veneer was fitted but only if the pulp had not been encroached upon.

The expert opines that the radiographic appearance of the tooth and the symptoms suffered by the patient all evidence the fact that Dr G over-prepared UR2 and so breached his duty of care to the patient. As a result the tooth will require root canal treatment with a reduced prognosis and further RCT in future.

A similar prognosis is likely for UR1 and UL1 with the reduced tooth tissue and the need for RCT – and the expert views this as a further breach of duty of care. However, he feels there can be no claim for a repeat cycle of veneers/crowns at UR1, UR2 and UL1 as this was always going to be necessary once the claimant agreed to have such restorative dentistry carried out.

MDDUS with the agreement of the member settles the claim out of court.