...Dr N examines the child and notes a possible discrepancy in limb length with shortening on the left side. She also finds asymmetrical skin creases on the inside left thigh... 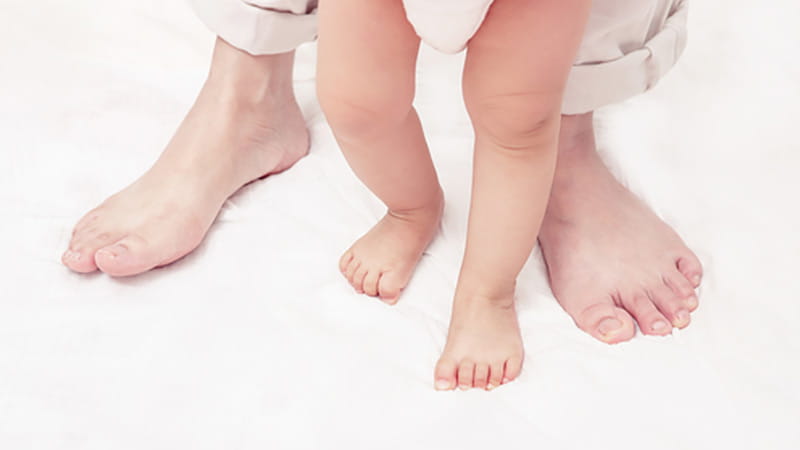 BACKGROUND: Ms T has just given birth to a baby girl – Kirsty – and attends her GP surgery for the standard newborn check at three days.

The GP - Dr N - gives Kirsty a full examination, including heart and chest sounds, skin, genitalia and hips. In the medical notes for each element of the examination Dr N uses the notation NAD to indicate ‘no abnormality detected’. Ms T says she has no particular concerns and a follow-up check is agreed for six weeks.

Later at the six-week child health surveillance check Dr N again exams the baby fully from head to toe, checking the hips and recording NAD in the notes. She reassures Ms T that Kirsty is entirely well and developing normally.

Just over 15 months later Kirsty attends the surgery with her mother and father. They have noticed that, having started walking, Kirsty has developed a limp on the left side with an out-toeing gait. Dr N examines the child and notes a possible discrepancy in limb length with shortening on the left side. She also finds asymmetrical skin creases on the left thigh. The GP informs Kristy’s parents that she requires an orthopaedic referral for further assessment. A referral letter is sent the next day.

One month later Ms T attends with Kirsty at a local orthopaedic outpatient clinic. The specialist registrar notes that the child has a shortened left leg with an obvious limp and asymmetrical skin folds. An X-ray confirms a high dislocation of the left hip with significant dysplasia. Kirsty is later seen by a consultant and her parents are told she will require reduction surgery with recovery in a hip cast. The prognosis is uncertain.

A letter of claim for damages is received by Dr N a year later from solicitors acting on behalf of Kirsty. It is alleged that the GP was negligent in failing on two occasions to detect the child’s left-sided hip dysplasia. In particular Dr N is claimed to have failed to provide a detailed record of the signs and observations noted during the two routine health assessments – the only reference to the hip examination being “Hips: NAD”. No record can be found in the patient notes of specific tests carried out to assess the hips.

In regard to causation it is further alleged that the delay in detecting Kirsty hip abnormality has necessitated more extensive treatment with significant pain and suffering and an uncertain prognosis. Diagnosis before six months would have allowed treatment with a Pavlik harness to allow normal hip development.

ANALYSIS/OUTCOME: MDDUS undertakes an examination of the case and commissions an expert in primary care to assess the allegations.

In regard to Dr N’s note keeping the expert finds these are of a standard expected of any reasonably competent GP. Dr N detailed the systems examined with regard to the specific and essential elements of both the neonatal and six-week check, indicating that all the observations were normal. The expert states that is common practice for a GP having examined a system to use the notation NAD. Further, it would be uncommon for a GP to record each test (namely the Ortolani and Barlow manoeuvres) used in a health assessment. All in all he finds the records clear, extensive and clinically appropriate.

In regard to the failure to detect left-sided hip dysplasia the expert questions whether it was present at the time of Dr N’s examination of Kirsty. Developmental dysplasia of the hip (DDH) is commonly present at birth but can also develop later in the first year. The medical notes suggest that the abnormality only became apparent in the months after Kirsty’s six-week check.

MDDUS solicitors send a letter of response to the claim against Dr N denying breach of duty in her treatment of Kirsty. It cites the expert report on the adequacy of the clinical examination as recorded in the medical notes. Causation is thus also denied. Four months later a letter arrives from the claimant solicitors stating the case has been discontinued.