...Mr K later re-attends the district nurse and she phones Dr R to report that the knee is now hot and swollen and the sutures have burst in two places – but the patient is weight-bearing... 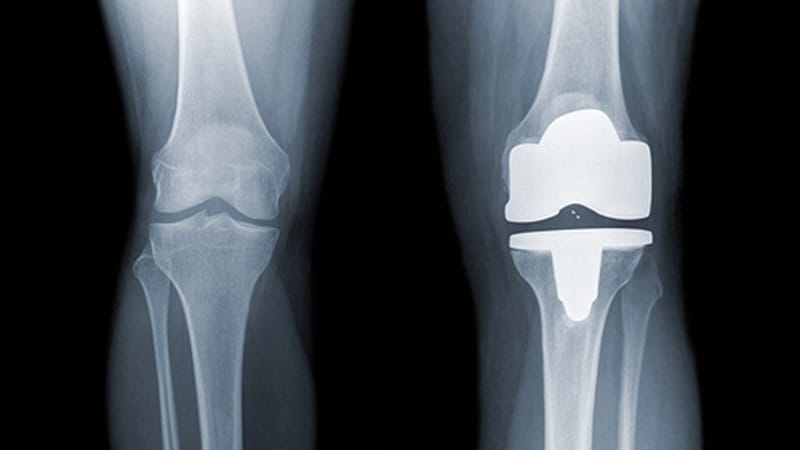 BACKGROUND: Mr K is 56 years old and has been admitted to hospital for surgery. He suffers from chronic rheumatoid arthritis in his right knee, with pain, stiffness and swelling. He had been referred to an orthopaedic surgeon and after discussion has opted for knee replacement surgery. The surgery is carried out successfully with no complications. Mr K is administered standard intra-operative antibiotics. Over the next 48 hours there is some swelling around the knee with slight oozing.

Five days after the surgery Mr K is mobilising well. There is still some oozing around the wound but the patient is generally well. He is discharged home with follow-up from the district nursing service.

A few days later a district nurse examines the wound and finds that it is still leaking and thinks there might be some infection. She phones the patient’s GP – Dr R. He listens to her assessment and issues a prescription for flucloxacillin (the nurse does not have prescribing rights).

Mr K later re-attends the district nurse and she phones Dr R to report that the knee is now hot and swollen and the sutures have burst in two places – but the patient is weight-bearing on the knee. He asks the nurse to take swabs and prescribes co-amoxiclav. Three days later the swab results come back to the practice and are reviewed by Dr R. The report states that there was mixed growth of skin flora, suggesting colonisation rather than infection. But it recommends a clinical assessment to decide significance.

Just over a week later the district nurse phones the practice again and reports that the wound is still leaking and "offensive". Another GP – Dr L – phones the patient and discusses the swab results and the state of his knee and general health. There has been no request for a home visit. Dr L prescribes the antibiotic metronidazole.

A few days later Mr K attends A&E. The wound is weeping with a yellow discharge and he feels generally unwell, hot and faint with shooting pains up his back. The ST on duty is concerned the knee replacement could be infected.

Blood results show a raised white cell count and elevated CRP. The patient is admitted and commenced on IV antibiotics. The wound is explored and cleaned in surgery but the infection does not appear to extend to the joint. Over the next two weeks in hospital Mr K requires further wound debridement and exploration and the conclusion is that it is a superficial wound infection only.

Two months after being discharged from hospital Mr K is seen in an orthopaedic outpatient clinic. He still complains of pain on movement but it is noted that the knee replacement is settling down following the wound dehiscence, with only a small area of skin yet to fully heal.

A letter of claim alleging clinical negligence is received at the practice nearly a year later. Both Dr R and Dr L are named as at fault for not calling the patient in for review for a suspected wound infection. It is alleged that this put the patient at risk of deep infection in the replaced knee joint and led to further hospitalisation and a long recovery period.

ANALYSIS/OUTCOME: MDDUS assesses the case and commissions a report from a primary care expert who notes that the patient was discharged into the care of a district nursing team skilled in wound management – probably more so than an average GP. In this respect he is of the opinion that Dr R could be confident that the nurse treating Mr K was acting within her competence and would have requested him to examine the patient if she felt it was necessary, and that the prescription of antibiotics on the two occasions was appropriate.

The expert does state that it might have been best practice to refer the patient back to the orthopaedic team after the second contact with the district nurse in regard to the persistent wound infection, but that "a body of competent GPs would have waited to see if the condition settled".

In regard to Dr L’s involvement, the primary care expert believes that the patient should have been assessed for further management and referral after the district nurse’s report that the wound was still "leaking and offensive" – and this constituted a breach of duty of care.

An opinion on causation is sought from an expert orthopaedic surgeon, who states that the knee replacement does not appear to have been deeply infected and is functioning reasonably well despite the patient complaining of pain on movement. He considers this normal and not resulting from the superficial infection, which appears largely to have cleared. Wound infection is not uncommon in knee replacement surgery and he believes the only effect of the failure to refer was to slow up Mr K’s expected recovery.

MDDUS in consultation with the practice agrees to settle the case on behalf of Dr L without admission of liability.