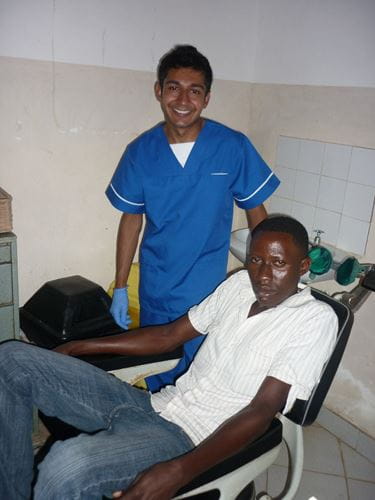 IN a normal day’s dental work it’s fair to say that getting up close to a giraffe and speaking Swahili do not feature prominently. But these are just two of the unique experiences I encountered when I took a month off work to volunteer in Kenya.

I have always believed that helping those in need is one of the most important things in life and I was keen to do something that could also make use of my skills as a dentist. It was this thought that prompted me to contact the coordinator of Gracepatt Ecotours Kenya, Patrick Karimi (who runs the company with his wife Grace) to find out more about their dental internship project. And, after hearing about the poor state of dental care in the deprived area of Malindi, I decided I wanted to help.

To prepare for my month-long trip into the unknown, I spent a few weeks gathering up as many dental supplies as I could. I was taken aback by the generosity of companies such as Wright Cottrell, Colgate, Oral B and others who kindly donated items including gloves, masks, visors, filling material, disinfectant wipes, toothpaste, toothbrushes and scrubs, as well as toys and stickers for children.

With everything I’d need carefully packaged, It was finally time to set off for Kenya. I arrived in Nairobi off an almost nine-hour flight to be warmly greeted by Patrick who took me to a transit house for the night where I hoped I’d shake off any jet lag. The following day he took me to the Sheldrick elephant orphanage and a giraffe centre where we had the chance to see these beautiful animals up close. It certainly made for an unusual and enjoyable introduction to Africa.

From there, it was time to go to work and a rather hot and bumpy seven hour bus ride took me to the town of Malindi on the country’s south-east coast. on the bus I met hospItal coordinator George Mumba who took me to meet the family whose home I’d be sharing for the next month. Staying in a traditional African home really added to my experience with my friendly hosts introducing me to traditional African food and culture, as well as teaching me some basic Swahili.

Once I’d settled in it was time to go to the hospital dental clinic where my adventure really began.

I was given a position within the Malindi District Dental Department leading a small team consisting of myself, a fourth-year dental student and a dental nurse. As a government-run hospital, the patients who came for treatment were unfortunately worse for wear financially as well as dentally. The majority came from nearby villages and I was surprised at the large number who presented medically with HIV.

The prime treatment we carried out was extractions – sometimes multiple in the same patient – and there were several patients with facial trauma seen in other departments who presented for dental review. More unusual tasks included providing treatment for prisoners or carrying out age assessments for patients involved in court cases.

Unfortunately, facilities in the clinic were limited. in addition to the dental chair being broken and the drill being inoperable, there was a lack of instruments, gloves and masks. The sweltering heat only added to the challenging environment. Despite the difficulties, I knew this was the best it was going to get thanks to the financial restrictions placed on the hospital by its limited government funding.

Each morning, at least 10 patients would queue outside the clinic waiting to be seen, mostly complaining of toothache that had kept them up all night. Around half the patients didn’t even own a toothbrush, never mind regularly brushing. The dental student, Steve, acted as my interpreter as very few patients spoke English. I had learnt the basics in Swahili and could say things like open wide, extractions, pain, numb, filling and bite together. Mornings were like a conveyor belt of patients but it was rewarding knowing they were leaving with the source of the pain removed.

The afternoons in the clinic were quieter so i arranged to promote dental health in the community with Steve. We visited three local schools – Sir Ali Bin Salim, Malindi HGM and Malindi Central Primary school – speaking to packed classes of 70 and 150 pupils, plus a whole school of 1,000 pupils aged 10 years or older.

With the aid of the blackboard, demonstration models, posters and Steve’s language skills we covered topics including tooth structure, diet, brushing, fluoride, caries, periodontal disease and hand hygiene both in English and Swahili. The pupils seemed keen to learn and we quizzed them at the end, offering prizes and samples for those answering correctly.

It can be difficult to know how effective these kinds of visits are, particularly as many villagers struggle to afford even basic dental supplies, but I was pleased to find out that several of the pupils we had spoken to visited Malindi District Hospital to get their teeth checked. During the school visits, community health workers listened and took notes with the aim of continuing to deliver dental health education to other schools. I am happy to report that two more schools have been visited by these dental health promoters in Malindi since I returned to the UK.

Looking back on it, the whole experience was a real challenge and took me out of my comfort zone of working in a fully equipped dental practice with patients who can understand English. Spending a month in such conditions has also really opened my eyes to the problems of government-run dentistry in Kenya and I would urge other dentists and dental students to consider volunteering. I have made some cracking new friends for life and had the privilege of helping patients in great need of treatment as well as helping to educate schoolchildren about the importance of prevention. The experience definitely enhanced my clinical skills and has given me a glimpse of the other face of dentistry.