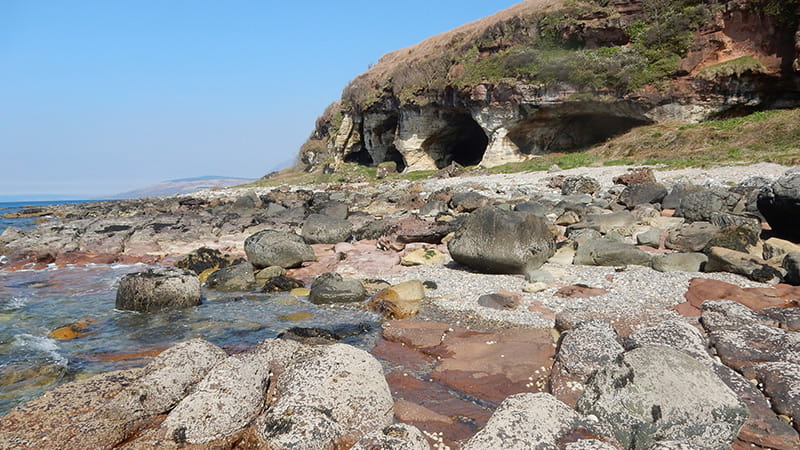 THE sea is calm the day I make the short ferry crossing to the Isle of Arran from the North Ayrshire port of Ardrossan. Standing on deck I am even lucky enough to see a dolphin break the placid surface as the granite peak of Goatfell comes into view above the low cloud. Lying only 40 miles southwest of Glasgow as the crow flies and only 14 miles from the Scottish mainland the island does not seem as remote as I had imagined.

Less than an hour later I sit in the meeting room of the local GP surgery in the small village of Shiskine. I have come to meet the practice manager of the Arran Medical Group (AMG) – Ruth Betley. The Arran Medical Group was formed in 2012 with the merger of the three main practices on the island. It serves a resident population of over 5,000 people but that can increase fourfold in the summer months when the island is swamped by holidaymakers.

Ruth explains that, even with its close proximity to the populous central belt of Scotland, Arran faces the same challenges typical of remote and rural practices across the UK. Not least recruiting and keeping staff with a skill set to serve the broad needs of an isolated population.

"When you have lots of water between you and the mainland, GPs here will do many things that other GPs would send on to secondary care," she says.

Ruth is responsible for the overall management of three base surgeries (at Brodick, Lamlash and Shiskine) and three branch surgeries with 30 staff – all part-time – in addition to six GP partners, two salaried GPs and one rural fellow. She is supported by three team leaders for on-site management of the base surgeries and also a business manager. In addition to delivering primary healthcare on the island, AMG also provides a range of additional services including out-of-hours care, medical input to the local Arran War Memorial Hospital, accident and emergency cover, BASICS prehospital care and police surgeon work.

"It’s quite a large area, geographically. You are 56 miles all around the island,” says Ruth. “I actually work in each of the main sites. I move around a lot. That’s the only way you can do it. You need to be there and see how people are getting on."

Ruth is originally from Yorkshire and moved to Arran nine years ago. She and her husband had been coming to the island for holidays and decided to make a lifestyle change. She had worked in health administration all her career, first in hospitals and then as a director of a primary care trust near Halifax.

"The director’s job was quite long hours and difficult. And then an opportunity came up in Arran," she says.

"The existing surgery in Shiskine was one of the last to be located in a private house. They had plans approved to build a new surgery and I thought this would be quite an interesting little project for me to do part-time on Arran. I had just had a baby."

They made the move to the island and bought a house just outside Shiskine, with Ruth’s husband – also a former NHS administrator – embarking on a major renovation.

"I worked on the project a couple of days a week until the surgery was finished but then the new GP was keen that I become a practice manager at Shiskine. So I took that on part-time."

In 2011 an urgent clinical review of medical services on the island was undertaken. This was in response to problems not unique to Arran but symptomatic of rural practice across Scotland. A recent paper published by a strategy group of the RCGP Scotland concluded that remote and rural healthcare in Scotland is experiencing a deepening crisis and is in urgent need of review and reshaping. Rural practices have in recent years suffered from ongoing cuts in funding, along with rising costs and patient expectation. Recruiting GPs and other staff willing and able to work across the spectrum of rural general practice – including out-of-hours, emergency and hospital work – has become increasingly difficult.

"The review covered the hospital, the GP practices, the nursing staff, plans to introduce NHS 24. We looked at nurse skill mix at the hospital, we looked at an ENP (emergency nurse practitioner) service," says Ruth.

"The aim was to try to make Arran sustainable into the future. And the merger of the practices was a product of that. We were already going to do it – to be fair. It was already a plan. Because once you pool that clinical team it just makes things so much more efficient. All the GPs working together [off one rota] has been a major efficiency."

A year later the Arran Medical Group was formed, unifying primary care on the island under the one service and Ruth was appointed overall practice manager – no doubt in part due to her experience in senior healthcare management. Merging of staff and resources has allowed economies of scale and integrated work patterns that avoid duplication of services and have led to a more financially viable primary care service.

"To start with it was difficult. Some of the decisions we made left patients very unhappy. We centralised the phones to one particular site and that went down like a lead balloon," says Ruth.

"It’s still an issue. People know the staff in their surgeries; they have a really good relationship with them and that’s something we wanted to value and keep. But at the same time things move forward and modernise. It’s been a balance."

Overall the merger has been judged a success and the Arran model is now being looked at by other rural primary care services in Scotland facing similar challenges. AMG is also a training practice, currently with three GP trainees and is accredited by Dundee University to take on medical students for work experience.

"All of this is very important in terms of succession planning and sustainability of services in remote and rural practices," says Ruth.

Arran does however come with its own unique challenges – being popular both with visitors and retirees.

"Our population is skewed – the over-65 population is very high," says Ruth. "In mainland Ayrshire it’s 19 per cent of the population but for Arran it’s 27 per cent, with many frail elderly people over 85. So you can imagine the pressures on social and healthcare services are significant."

GPs on the island deal with a high degree of chronic co-morbidity and there is a high incidence of cancer – again with an elderly population. "So there is lots of palliative care, but we do have a good district nursing service."

Holiday time brings added challenges with the tourist season lasting from April to October. Traffic jams on the island are not that unusual in July.

"Our population goes up to about 20,000 in the summer. So there is a significant increase in activity," says Ruth. "People falling off bikes – a lot. Walkers falling down hills – a lot. Holidaymakers with jelly fish stings, ticks – that sort of thing. So in the summer time it gets much busier for staff."

But even with this annual influx of visitors, Arran remains a collection of small tight-knit communities and Ruth says there can be an element of "living in a goldfish bowl" when you have such a recognisable job. There is also the issue of confidentiality.

"Sometimes people ask you questions or comment on someone’s health and you just have to say – ‘Oh, I don’t know’," she says with a laugh. "No one on our staff knows anything about anybody. That’s how it works."

But the trade-offs of living and working in a remote setting have been well worth it as far as Ruth and her family are concerned. Just as I’m leaving Shiskine we discuss her local running circuit which takes her past the prehistoric stone circles at Machrie Moor and along the coastal path to King’s Cave.

"We live in a lovely place," she says. "I feel very privileged."