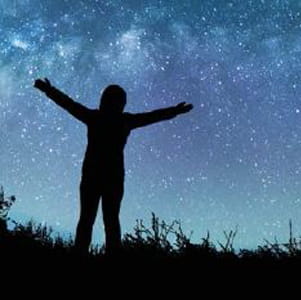 WHEN I was diagnosed with cancer a reader wrote to me and said that he was looking forward to my perspective on language, and specifically euphemism, in the context of serious illness. During my unexpected fieldwork, I have encountered numerous clinicians and had many conversations. Euphemism has been largely absent. I have been met with an honesty, clarity and responsiveness for which I am grateful.

I have reflected on those consultations and conversations and have been surprised by my capacity, maybe even my need, for doubling. By which I mean, the simultaneous yearning for the contradictory. I have craved both rationality and magical thinking, science and the ephemeral, stoicism and emotional expression, realism and hope. I am not alone. The neuropsychologist Paul Broks in his exquisite and moving book – Darker the Night, the Brighter the Stars – describes how, in the midst of his grief, myth, imagination and story are unexpectedly present and urgent. I have thought of Brok’s words and experience as I salute single magpies whilst clutching the best available scientific evidence provided by the oncologists.

Since I walked into The Royal Marsden and at every consultation, I have wanted both to know and not to know, to understand and to deny, to reject and to accept, to question and to trust. Of course, sometimes, one preference has been stronger than the other. I cannot conceive of not wanting to know a diagnosis or of undergoing surgery without an appreciation of what is involved and why. Yet, more often than not, there has been a curious doubling, whereby competing and conflicting impulses co-exist.

It was, I am embarrassed to admit, a shock to experience the impact a standard consent form could have on a patient who had previously considered herself to be informed, rational and enquiring. When consent was being sought both for chemotherapy and for surgery, I was taken aback by the rising impulse to stop reading as I went through the possible side-effects and potentially serious and fatal complications. I noticed that when I returned home, I hid my copy of these consent forms even as I knew it was absurd to do so.

At the beginning of my treatment, I asked to be copied into correspondence from the specialists to my GP. I am used to reading medical records and letters. Nonetheless, the effect of seeing my own experience captured in clinical terms with its brutal specificity, detached evaluation and the unavoidable facts laid bare, was disruptive and painful. I quickly learned to recognise the envelopes and to expect a lurch of my stomach. I would pick up the letters from the doormat as if handling a grenade before bracing myself to read the contents. I emphasise that I wanted to receive these letters and I am grateful that copying in patients to correspondence has become common. I believe in openness and I am committed to sharing information. My response was borne of the doubling that had occurred.

I was both constant and altered. My academic understanding of, and commitment to, disclosure, choice and information remained, but illness rendered me simultaneously scared, vulnerable and overwhelmed by the impact of what I sought. I learned I could both crave and be undone by a consent process that was unquestionably exemplary. I understood that I both yearned for, and wanted to run from, the information that was being offered in a gentle and patient-centred way. That consistency and difference prompt an inevitable doubling and inherent contradiction whereby the patient may seek and avoid that which I have taught for years as being ‘best practice’ in clinical communication.

I have reflected on what it is to be a clinician in such a context. Perhaps professionals too are susceptible to doubling. Doctors may believe in the value of information sharing whilst wishing they did not have to impart painful news or life-changing knowledge. They may want always to be honest and realistic but also yearn to offer hope. A professional will draw on his or her scientific training and a rational evidence base whilst remembering the patients who surprised them. To be pulled in different directions, whether as a patient or as a doctor, by competing and opposing forces is perhaps not merely just common but inevitable. Yet, I do not recall it being discussed in clinical communication ‘training’ to which I have contributed. That seems like an omission.

To acknowledge the potential, maybe even the necessity, for these simultaneous and yet contradictory responses is to acknowledge the essential humanity of healthcare. It is to recognise that facts, knowledge, skills, experiences and emotions collide in the clinical consultation. It is to give permission to us all – doctor and patient alike – to meet and to interact in a context that is complex, uncertain, challenging, but ultimately, potentially transformative.

Ethics: “Even nurses are not compassionate anymore…”