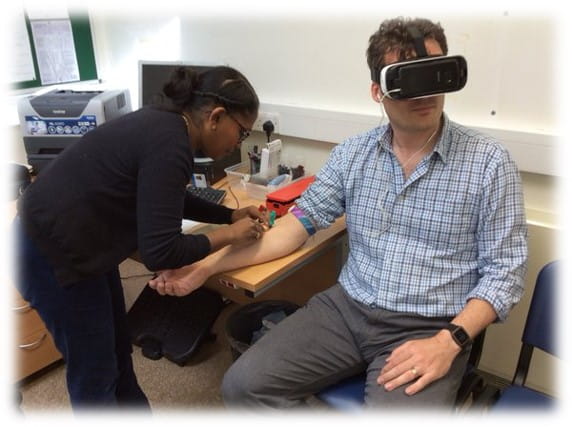 HIS fascination for digital innovation began as a boy while living in the global technology hub of Singapore, now three decades on Dr Keith Grimes has gone from gamer and geek to digital healthcare innovator.

Speaking on his work smartphone – which he uses daily to help treat patients at his East Sussex surgery – it’s clear that Dr Grimes has a passion for the digital revolution.

“I was a geek and a gamer long before I was a doctor,” he says. “I am always trying to bring it into what I do but I appreciate that if I want to share the positives, I have to do it in the most lightweight way.

“Doctors use the internet, WhatsApp – all those different technologies outside work – yet think that they can’t use it in work. There are of course important considerations around data protection and confidentiality, but that doesn’t mean that you cannot do it.”

In demand as a conference speaker at home and abroad, Dr Grimes offers a telling example of how technology can be integrated into general practice to enhance patient care. His smartphone is fast becoming as vital a diagnostic tool as traditional tools like the stethoscope.

The 43-year-old says: “I use my mobile phone for a lot of what I do either for information storage, contacting colleagues or, more recently, as a medical device. I use Cupris, a digital otoscope, to look inside people’s ears and take photos and videos that I can share with the patient, which a normal otoscope does not do.

“I can then securely transfer that image on to the clinical system or share to NHS.net or with ENT colleagues. I have even avoided an unnecessary patient hospital admission because I was able to send an image to the ENT doctor for his opinion.

“I also use the CE-marked AliveCor Kardia Mobile ECG machine on my phone (where appropriate) to identify atrial fibrillation (which significantly increases a patient’s risk of a stroke) or palpitations.”

An active social media user, with his own Twitter account (@keithgrimes), website and blog (www.drgrimes.co.uk), Facebook page (www.facebook.com/groups/vrdocs) and a member of numerous WhatsApp groups, Dr Grimes regularly communicates electronically with other GPs and consultants, while some patients choose to consult with him via email and Skype. This easy accessibility can encourage patients who may otherwise have avoided a GP surgery to seek medical attention.

As well as benefits, there are of course medico-legal risks to consider and doctors must proceed with caution before using digital technology in healthcare. Key risks relate to data protection, patient confidentiality and informed consent and doctors should be sure to comply with the IT policies of their employing organisation or contracting body, as well as the GMC’s Confidentiality guidance and the Data Protection Act.

We could see a reduction in face-to-face consultations as virtual clinics become more widely adopted.

Before sharing any patient information, Dr Grimes secures informed patient consent and shares only anonymised information with colleagues via private messaging groups, across encrypted channels. The GMC advises “recordings made as part of the patient’s care form part of the medical record and should be treated in the same way as written material in terms of security and decisions about disclosures.” Lost or stolen devices pose a particular risk so it is not advisable to store confidential patient information on personal smartphones/devices.

The doctor, who qualified at the University of Aberdeen, is also quick to advise patients on protecting their private data.

He says: “Patients often take healthcare-related pictures on their phone to show me without realising that many smartphones automatically back up to the Cloud, meaning images may be seen on devices used by other family members. I advise them about ways to do this safely but, while I can guarantee the security of my NHS. net email account, I cannot say how secure my patients’ emails are.

Looking ahead, Dr Grimes has even bigger ambitions. He plans to make greater use of his “personal favourite technology” – virtual reality (VR).

As unlikely as it sounds, VR is already proving a successful means of reducing pain during procedures such as blood tests, dressing changes and joint injections. One recent patient who was anxious about a dressing change for a back wound agreed to don the VR headset.

“She watched a short video, An Introduction to VR, and it was amazing,” Dr Grimes says. “She was giggling while the nurse was packing the wound. We asked at the end ‘Could you feel it?’ and she said she could but it wasn’t anywhere near as bad.”

VR gives the illusion of being elsewhere which means it not only distracts the patient but can reduce anxiety and heart rate. Anxiety about pain can exacerbate the sensation so this method helps to reduce the level of pain experienced.

Dr Grimes’ practice uses Samsung’s Gear VR technology around three times a week and he will soon explore the use of VR in reducing post-operative delirium in ICU as part of an NHS clinical trial.

Introducing new systems or technologies can bring extra pressures for already-overworked practices, so how does Dr Grimes propose to convince the unconverted?

“All of this is possible with the technology that you and your patients already have,” he says. “I would hate to add something that made a person’s life harder, but the fact is that more and more patients will want to use technology and they will want doctors to help them.”

Dr Grimes is set to speak at a conference in Hanover about the “gamification of healthcare” and how computer game technology can be used to improve patient outcomes, for example via apps to monitor fitness or in the self-management of chronic conditions.

He acknowledges that many people may feel games technology has no role to play in healthcare, but he disagrees and believes it will deliver genuine benefits. He adds: “Whether we want it or not as GPs, change is coming and it’s important for us to integrate what works, and in a responsible way.”

Looking to the future, even more sophisticated technologies may be used in healthcare. Dr Grimes will soon virtually visit patients in care homes. And, we could see a reduction in face-to-face doctor/patient consultations as virtual clinics and artificial intelligence (AI) become more widely adopted by healthcare providers.

While doctors should not rely too heavily on virtual consultations due to their limitations, Dr Grimes predicts virtual clinics will become more widespread and care will soon be managed by “moving the data, rather than the patient.”

Longer term, he sees a greater role for AI: “We will be able to access specialised systems supporting the role of the doctor (and the patient) where the expert opinion will come from a machine as opposed to a human.”

Some technology proponents believe AI could eventually exceed the ability of a human to diagnose. Dr Grimes predicts that in 20 to 30 years’ time, the boundaries between general practice and secondary care will become “blurred”, as will those between “human and non-human providers” of that information. “Think chatbots like Apple’s Siri and Amazon’s Alexa,” he says, adding that he hopes the quality of patient care would not be compromised.

Some may find Dr Grimes’ predictions daunting, but he says innovation should not be feared. “The optimistic view is that it will massively augment our ability to provide excellent patient care. Yes, we may lose some things, but we will gain more time, something every doctor wishes they had.”