Profile: Half doctor, half netballer 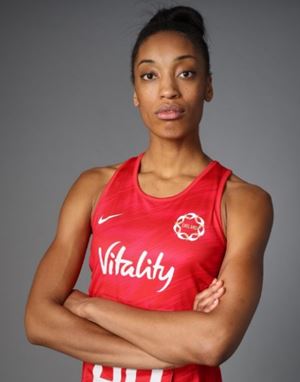 PURSUING your life’s passion is not something everyone has the chance to do. But Layla Guscoth is currently pursuing two.

Through sheer determination and force of will, the 27-year-old has successfully blazed a trail through the world of national and international netball while also qualifying as a doctor.

This remarkable feat would sometimes see the young medic play games straight after a nightshift or travel to far-flung corners of the UK to compete after a long working day. It also saw the 6ft tall defender play a key role in England’s progression at the 2019 Vitality Netball World Cup in Liverpool in July.

Most people might balk at the thought of managing a schedule that is so physically and mentally demanding, but Layla is unfazed.

“It is challenging finding time to play netball and work as a doctor,” she says, “but it is so worth it. I enjoy them both so much and see them for what they are. I know you can only play netball for a short time and I plan to make the most of it for as long as I can.”

Born in Birmingham, Layla began playing the sport aged 11 before discovering an interest in medicine during a hospital work experience placement in sixth form. Not wanting to sacrifice either, she continued to play club netball – for Team Bath – throughout medical school.

“Team Bath were very understanding,” she says. “They were really good at helping me balance it all, sometimes rescheduling games around my shifts.”

Layla – who describes herself on Twitter as “half doctor, half netballer” – has been an England international player since 2011. She did her pre-clinical training at Oxford University before moving to University College London (UCL) to be closer to the England netball training camps.

“It wasn’t without difficulties,” she says. “I would sometimes finish nights then have a game that evening which wasn’t ideal, but I got through it.”

Knowing her long-term career would be in medicine, she took a break beginning in 2015 to complete her foundation training. In an unfortunate twist of fate, it was during this hiatus that her England team mates achieved their best result in a major tournament – taking gold at the 2018 Commonwealth Games in Australia.

Despite missing out on the Roses’ moment of glory, Layla has no regrets and describes the win as “amazing”, adding: “It meant so much for everyone who has ever had anything to do with England netball, or played netball even.”

Indeed, watching her team mates win gold inspired her to come back to the sport stronger than ever. Having finished her foundation training in 2018, she was offered a contract to play for the Adelaide Thunderbirds in Australia’s Super Netball League – the only professional league in the world.

She took a year off medicine and moved Down Under in January 2019. While she won’t be doing clinical work in Australia, Layla will be filling her time off-court by taking part in a research project studying metabolism and sleep at Adelaide University.

Her new life in the sun has been quite a change from the UK.

She says: “I’ve always dreamed of going to Australia to play because the standard is so high and it’s so competitive. Playing netball there has been great. It’s fully professional which makes it quite a different experience.

“I do miss clinical work but doing the research fellowship has given me the chance to learn new skills and try academia. And the beautiful weather is also a nice change from what I’m used to in the UK.”

One key skill Layla has honed over the years is time management. Something she admits took a lot of practice.

“Balancing both roles has given me me really good organisational and time management skills, something I wasn’t good at in the beginning. Being so busy all the time, you do need to take time to look after yourself and your health, including your mental health.”

While she admits it is tiring, Layla says playing netball has had a positive impact on her role as a doctor.

“Good time management is an important part of working as a doctor, so I’ve definitely benefited from that side of things.

“From the perspective of mental health and wellbeing, it’s really good to have a hobby and something to invest your time in. It’s important to have something else to think about and have a passion for. It’s helped me substantially and taught me a lot of good life skills.”

Layla is encouraging to other doctors thinking of taking time away from medicine to pursue their passion. “It’s being done more and more now,” she says, “and it doesn’t have to hold you back in your career. After your F2 year is a perfect time to do it because once you start specialty training it’s pretty intense. I was encouraged by senior clinicians to try something I was interested in and I’m so glad I did.”

Looking to the future, Layla plans to return to the UK once the Australian netball league ends in late 2019. She will then face the decision of which specialty to apply for, with renal or gastroenterology the frontrunners.

The Birmingham Commonwealth Games in 2022 are also in Layla’s sights – but she faces a more immediate challenge. Having been named by BBC Sport as one of eight players to watch in the netball World Cup, she was forced to withdraw after only her second game when she ruptured her Achilles tendon in England’s triumphant 36-goal victory against Scotland. Messages of support have flooded in from wellwishers as Layla prepares to undergo rehab.

Speaking before her World Cup appearance, Layla says: “I’ve learned to just take each year as it comes. If someone told me a year ago that I would be playing for my country in the World Cup I wouldn’t have believed them.”

England’s manager Tracey Neville issued a statement confirming Layla’s withdrawal, saying: “It is devastating that her journey in this World Cup is over but myself and all of the Roses are by her side supporting her through this time. We will do everything we can to ensure she is back playing again soon.”

One thing is for sure – for someone as tenacious, versatile and tough as Layla, the future is bright.