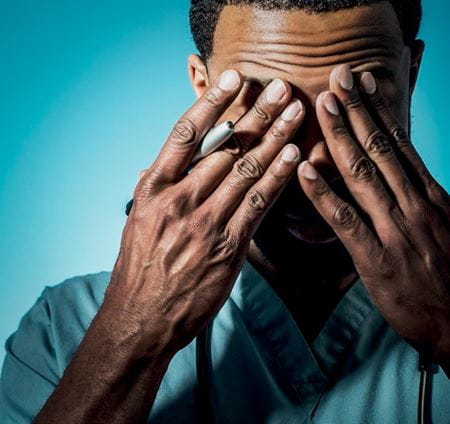 LONG hours and heavy workloads seem to have become a fact of life for trainee doctors, with many suffering from low morale and burnout.

Results from the General Medical Council’s (GMC) latest annual national training survey found that three-quarters of trainees were working beyond their rostered hours each week to fit in additional duties, while 40 per cent rated the intensity of their work by day as “heavy” or “very heavy”. More than a fifth (22 per cent) of trainee doctors said they felt short of sleep while at work.

For the first time, the regulator asked specific questions about the impact of burnout and exhaustion in its 2018 survey in a bid to identify areas for improvement.

Sleep deprivation is a key problem that has not been far from the headlines. An inquest into the 2015 death of Suffolk doctor Ronak Patel found he had crashed his car after falling asleep at the wheel while driving home from a third consecutive nightshift. Despite this and other similar high-profile cases, a 2016 survey for HSJ magazine found many doctors were actively discouraged from taking naps.

But one new initiative from the Faculty of Medical Leadership and Management (FMLM) hopes to tackle low morale, high attrition and burnout with its report Eight high impact actions to improve the working environment for junior doctors. While the actions are designed to be implemented quickly, FMLM says: “Meaningful improvements will require engagement locally between trusts and doctors in training, along with support from senior clinicians and, in some instances, investment of resources.”

But it adds that “the benefits to staff engagement, performance, cost savings and most importantly patient care and reduction of harm will provide a worthwhile return.” The initiative, run in conjunction with NHS Improvement and NHS Providers, has received the backing of national medical bodies including the British Medical Association, the General Medical Council and the Royal College of Physicians (RCP).

Link: Read the full report on the FMLM website