The legacy of Karen Woo

A British doctor killed in Afghanistan inspires a new award and offers a role model for medical altruism. Jim Killgore tells only part of her story 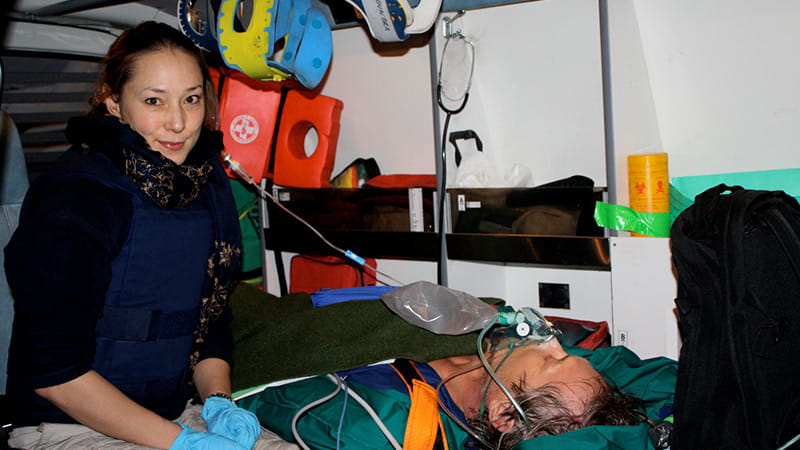 IN EARLY August of 2010 a team of 10 aid workers on a three-week expedition to the Nuristan region of Afghanistan were making their way back to the capital city of Kabul. The expedition had been organised by a Christian charity called the International Assistance Mission (IAM) and included medics from the USA, Germany and the UK who were providing medical assistance and supplies to remote mountain communities.

The team had been delayed getting their three 4-by-4 vehicles across a swollen river and had stopped for a rest when they were attacked by an armed gang. Everyone was killed apart from one driver. Among them was a 36-year-old British doctor named Karen Woo.

Karen was on her third trip to Afghanistan and had been living in Kabul since October providing medical treatment in a variety of settings including maternal and neo-natal care. Afghanistan has some of the highest maternal and child mortality rates in the world with one woman dying in childbirth every 28 minutes and one in five children dying before the age of five. She was determined to improve the situation not only in the city but in rural areas of the country. A later inquest into her death heard that the team had helped some 1,000 people over the three-week trek to Nuristan including saving the life of a young boy.

In the weeks and months after Karen Woo’s death a picture emerged of a tireless and charismatic young doctor determined to improve healthcare in one of the most dangerous and chaotic places on Earth. Her legacy recently inspired the BMJ Group to inaugurate a new Karen Woo Award to be presented at its annual Improving Health Awards ceremony in May 2012 to a medic who has gone well beyond the call of duty to care for patients and “exemplifies medicine’s traditional values of altruism, service, and courage”. So who exactly was Karen Woo?

One person who knew her well was Dr Andrew Vallance-Owen, medical director of BUPA. Karen worked for BUPA as assistant medical director before moving to Kabul to take up full-time aid work. She came to BUPA with a less-than-usual background having first studied dance at the London Contemporary Dance School. Later at the age of 24 she decided to do medicine at The University College London Medical School before specialising in surgery.

“It was clear from my first interview with Karen that she was a powerhouse of ideas and enthusiasm – and so it turned out,” says Dr Vallance-Owen. “She was full of life and quite exciting to work with really.”

During her medical training Karen had undertaken electives in Trinidad and Tobago, parts of Australia and Papua New Guinea so she knew about providing care in deprived regions. It was while she was working at BUPA that she made her first trip to Afghanistan.

“She came back very affected by the difficulties that the Afghan people were facing, the poverty there, especially the conditions that children were living in,” says Dr Vallance-Owen.

“So she decided to start collecting stuff to take out to Afghanistan – medical-related kit. It was a typical Karen sort of thing really. She got a cause and went for it, contacting hospitals, our own included and some of our businesses.”

Karen collected a lorry-load of surplus medical equipment and materials for airlift to Afghanistan to distribute among hospitals. She also began working with Bridge Afghanistan, a not-for-profit collective of medics, filmmakers and journalists attracting aid to the country.

“Everyone was very proud of her for doing this,” says Dr Vallance-Owen. “And it was not long after that she decided that this is what she wanted to do.”

Karen left her job at BUPA and moved to Kabul. Here she worked as a general physician and public health consultant, as well as in emergency medicine. She also began filming a documentary to highlight the desperate suffering in the country and to show the human side of Afghanistan. An insight “through the lens of birth and death, of loss and disability,” she wrote, and one that “reflects every aspect of the consequences of conflict on individuals and on their community. The loss of nearly all elements of the infrastructure of a country, security, governance, education, transport, clean water, sanitation and power, are all visible in the health of the people.”

Proceeds from the film were intended to raise funds for a charity she had started to help improve health and education programmes, particularly those focusing on neonatal, paediatric and maternal health.

In Kabul she also met Paddy Smith, a security consultant based in Afghanistan, to whom she became engaged. In a blog written in the months before her death she described both the dangers of life in Kabul and her difficulty in buying a silk ball gown for a “special occasion”.

She writes: “Me being me, I’ve left everything to the last minute and just to add extra pressure, I’ve decided to run the gauntlet of the Afghan dressmaker.”

Karen joined the Nuristan trek with IAM to run mother and child clinics in the remote mountain villages the team visited. Later after the attack the Taliban claimed that the group had been “preaching Christianity”. IAM is a Christian organisation and has operated in Afghanistan for over 40 years but Karen’s family have denied that her work had anything do with religion, saying her motivation was purely humanitarian. Even now it remains unclear who was responsible for the attack and the reasons behind it.

Going above and beyond

In the year and a half since her death Karen’s family have set up a grant-giving charity to carry on the work started by Karen. The Karen Woo Foundation (www.karenwoofoundation.org) supports healthcare projects in Afghanistan providing medical supplies and healthcare education, particularly to remote and rural communities with little or no access to even basic medical provision. A key figure in the work of the Foundation is Karen’s mother Lynn.

“What can I say about my daughter,” she says. “I described her to the New York Times as my Renaissance Woman, reflecting on her multi-faceted skills and interests over the years. She was an energetic and driven soul, bright and intelligent. She wanted to be valued and valuable, wanted to express both her artistic skills and her scientific bent. In Afghanistan she seemed to have brought those different passions together.”

Karen’s legacy also lives on with The Karen Woo Award. The genesis of the prize began when Dr Vallance-Owen was approached by the BMJ Group awards last year to ask if BUPA would sponsor The Medical Team in a Crisis Zone Award.

“I said we would sponsor it if I could connect the award to Karen’s name – say a few words in her honour – because that is exactly what she had been doing. They were a bit nervous about it. It was not quite standard for an awards ceremony.

“In any case it went down very well and the audience very much linked to what I said – the sort of person Karen was. Someone who does something out of the ordinary. Who goes the extra mile in some way outside their normal comfort zone.”

So this year the BMJ Group went one step further and devised a new award in her honour. Dr Vallance-Owen believes Karen’s character is very much reflected in the award criteria – an individual who has addressed a significant health challenge and demonstrates a clear commitment to delivering high quality care in a challenging situation, going above and beyond normal professionalism, possibly involving a degree of self-sacrifice or personal risk.

“I learned a lot myself from Karen,” he adds. “It’s important to be reminded of our basic value set and what we’re all here for.”

Lynn Woo is proud to have her daughter remembered in this way.

“Karen was unable to make the difference she intended,” she says. “The honour of the BMJ is that they saw the potential. She has inspired her family and friends to stand up and be counted.”

Jim Killgore is an editor at MDDUS

MDDUS is proud to be principal sponsor of the 2012 BMJ Group Improving Health Awards. To find out more about The Karen Woo Award sponsored by BUPA and information and entry criteria for all the awards go to thebmjawards.bmj.com/home