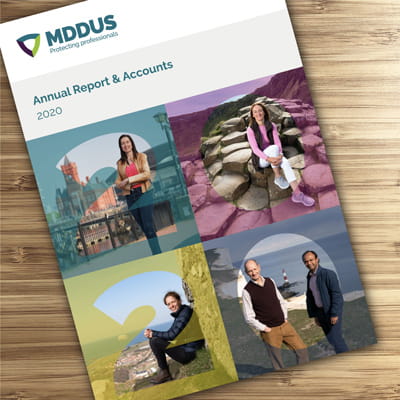 DOCTORS and dentists turned to MDDUS in record numbers for crisis support and advice during the pandemic, according to figures from our newly published 2020 annual report.

The organisation recorded that compared with 2019:

With doctors on the frontline of Covid-19 stretched to their limits and focused on combating the pandemic, the number of calls to MDDUS from its members fell by 19 per cent on the previous year.

However, of the 10,000-plus calls handled by the organisation’s in-house medical team, the complexity of concerns raised by doctors tackling Covid-19 saw the time taken to deliver advice increase by nearly a third in 2020 to 1,742 hours.

Dr John Holden, the chief medical officer at MDDUS, said: "The entire team at MDDUS has witnessed the toll the pandemic has taken on our clinical colleagues. They became aware very early on in the pandemic that doctors were experiencing significant stresses and unparalleled exposure to trauma on the front line.

"Long working hours in unfamiliar settings, intensified conditions, worries about PPE availability and fear of contracting Covid-19 and passing it on to their loved ones, were just some of the stressful conditions they had to endure.

"Calls to our advice lines early in the pandemic underlined that the fear of the unknown was immense.

"We also gained insight into the concerns our members had about the systemic impact of Covid-19 in their own practice. Some of the members we supported were worried that patient complaints, which arose from systems beyond their control, would disillusion their own staff, many of whom were already exhausted.

"Concern about wellbeing is a theme that will not diminish unless our members are given the time, training and support to recover from the impact of the pandemic".

The MDDUS annual report for 2020 sets out how the organisation, which represents the professional interests of more than 50,000 doctors and dentists, responded rapidly to its members’ urgent need for support and training as the pandemic gripped the UK.

MDDUS was also the first medical defence organisation to automatically reinstate free membership and support for retired members who opted to return to the frontline in support of the NHS. It was first to reduce the subscriptions of its dental members by up to 75 per cent as they were forced to down tools and close their practices in line with Covid-19 restrictions. It was a move our competitors followed.

Mr Stephen Henderson, head of dental division at MDDUS, said: "Dental practice across the UK faced an existential threat to its future at the start of the pandemic. The financial impact of closing practices was exacerbated by concerns of the supply and then the safety of PPE.

"It is no exaggeration to say that 2020 placed the biggest challenge of their careers on the UK’s dental profession.

"I’m proud of the exceptional effort my team made to support our dental members, the extent of which can be seen in the data published in our annual report".

Dr Jonathan Berry, the chair of MDDUS, said: "Our report sets out the passion, care and commitment that all MDDUS staff have shown in supporting our members through the most extraordinary circumstances.

"As I get ready to step down from the chair in September, I know that I could not leave my successor Professor Iain Cameron and our members in safer hands".