...It is claimed that the dentist breached his duty of care to the patient by extracting a wisdom tooth which was infected by an abscess... 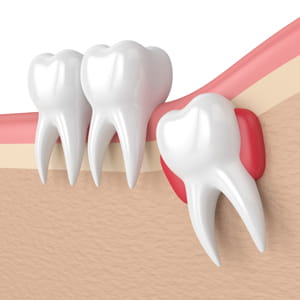 BACKGROUND: Mr L attends the dental surgery complaining of pain in LL8. Dr N examines the partially erupted wisdom tooth and makes a diagnosis of pericoronitis. Following discussion of potential risks and complications, Mr L agrees to have the tooth extracted as this is the fourth time problems have occurred associated with this wisdom tooth.

LL8 is removed without any problems of note, and post-extraction advice is provided to Mr L, including instructions to contact the dental surgery if experiencing excessive bleeding, undue pain or an increase in facial swelling relating to the extraction.

Four days later Mr L attends a hospital emergency department complaining of a large swelling on the left side of his neck. Assessment reveals a parapharyngeal abscess with a displaced uvula. Further observations, including an elevated heart rate and white cell count, lead to a diagnosis of septicaemia.

Mr L is admitted to the surgical ward and given IV antibiotics. The abscess is incised and drained under general anaesthetic but due to post-operative swelling he is kept intubated and transferred to the ICU.

Mr L has a protracted recovery in hospital and is discharged eight days later.

A letter of claim is received by Dr N alleging clinical negligence in the treatment of Mr L. It is claimed that the dentist breached his duty of care to the patient by extracting a wisdom tooth which was infected by an abscess. This led to further infection of the neck and life-threatening septicaemia.

ANALYSIS/OUTCOME: MDDUS assesses the case and commissions a report from an expert GDP, who reviews the patient records, radiographs and other relevant documents. The GDP opines that, given a clear diagnosis of an infected wisdom tooth with pericorinitis, extraction is standard treatment. The GDP also notes that there is nothing in the patient records to suggest the extraction procedure was particularly difficult or traumatic, and as such it is reasonable to conclude that the infection was an unfortunate post-operative complication, which is seen with reasonable frequency in such procedures.

No evidence supports direct causation by Dr N’s actions of the complications suffered.

MDDUS lawyers draft a robust letter of response denying negligence and the case is subsequently dropped.